“Congratulations! You win the award for most abortions!”

As ridiculous as the idea sounds, Planned Parenthood of the Rocky Mountains” has shown its usual tact as it awarded its Aurora, CO office the honor of a special certificate for “Exceeding Abortion Visits First Half of FY12 Compared to First Half FY13” 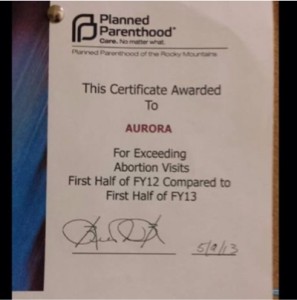 In plain language that means, the abortion giant rewards abortions because they bring in money. Not unlike a corporation awarding a local store affiliate for increasing its sales volume, Planned Parenthood awards its clinic with increasing its death volume.

There’s something perversely indulgent about inbred awards for extra killings. Implicit in the award is the fact that there is a drive to increase numbers, which ought not be a shock to anyone who has read accounts of former Planned Parenthood workers. It’s not just a certificate or volume award. The very existence of the award says,  “You killed more babies this year than last. Yay for you!”

The priorities of the abortion organization are clear and unhidden. Not even bothering to mask it in “client increase” talk, the award directly says the honor is for “exceeding abortion visits” as if that’s a goal to achieve, a mark for which they should strive.

And that, of course, is exactly what it is. The winners in the business known as Planned Parenthood are those who record the most deaths.