The Center for Medical Progress founder David Daleiden is taking a judge to court. Daleiden says U.S. District Judge William Orrick, the judge who continues to suppress the release of CMP undercover videos filmed at National Abortion Federation events, has close ties with the abortion industry, including a long relationship with a board member of a Planned Parenthood affiliate who is a member of the National Abortion Federation (NAF). Daleiden says because of this and other reasons, Orrick is not fit to rule impartially in the suit brought against Daleiden by NAF, and must be removed from the case. 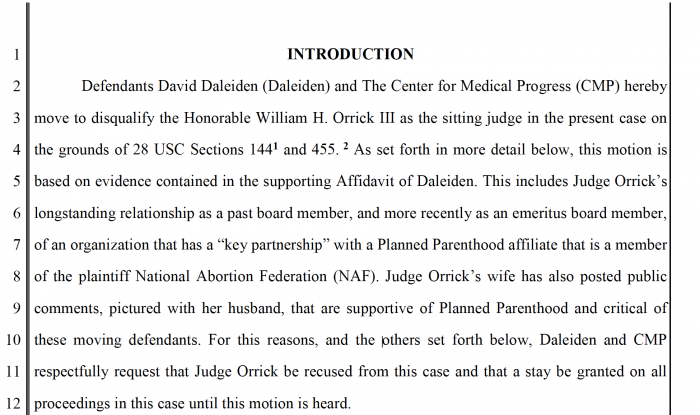 The 185 page affidavit filed with the court contains a few pages of Daleiden’s sworn testimony, followed by over 150 pages detailing evidence of Orrick’s glaring bias, rendering him unqualified to fairly rule on the matter.

The basic for the motion is Section 144 of 28 USC, which speaks to judicial bias. It says:

Daleiden outlines the judge’s work opening and helping to run a Planned Parenthood abortion referral center. Orrick spent several years a board member of the Good Samaritan Family Resource Center (GSFRC) in San Francisco. During his tenure as the board’s secretary, Daleiden says, “GSFRC embedded the Planned Parenthood clinic inside its own headquarters, where Planned Parenthood Shasta Pacific continues to operate to this day as a ‘Key Partner’ of GSFRC. 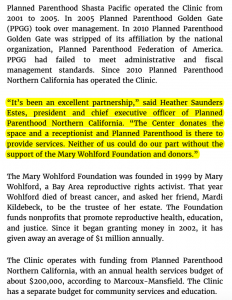 Orrick and his wife also donated to the organization:

Further at issue is that Orrick’s wife, Caroline, has multiple social media posts supporting Planned Parenthood, including changing her profile picture to an “I stand with Planned Parenthood” frame on her Facebook page. The instructions for using the frame reveal not only suport of the abortion corporation, but a direct stance against the CMP videos. 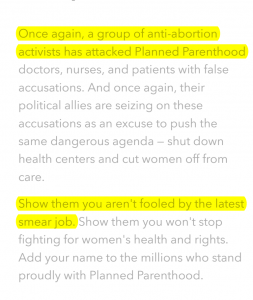 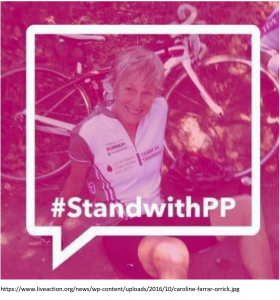 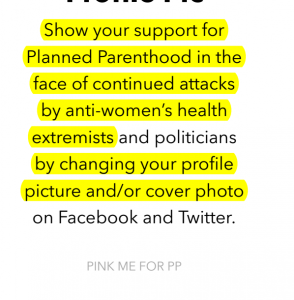 The motion also notes that Caroline Orrick publicly “liked” a Facebook post in which CMP’s videos were called “domestic terrorism.” 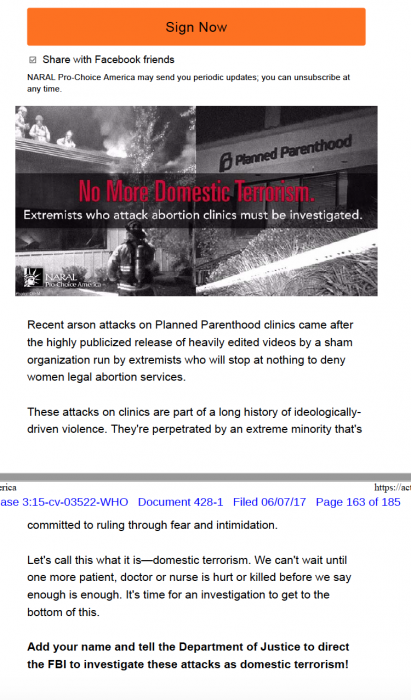 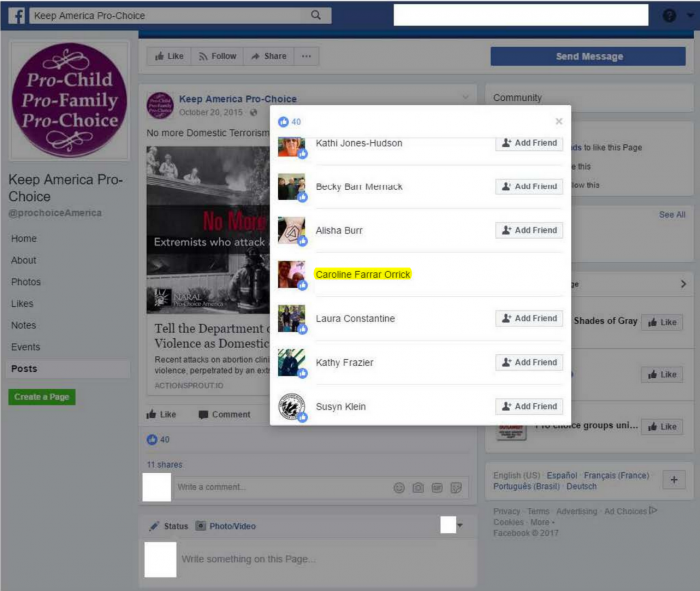 Caroline Orrick “liked” another post rejoicing that Daleiden had been indicted in Texas, regarding the videos. Those indictments were later dismissed. 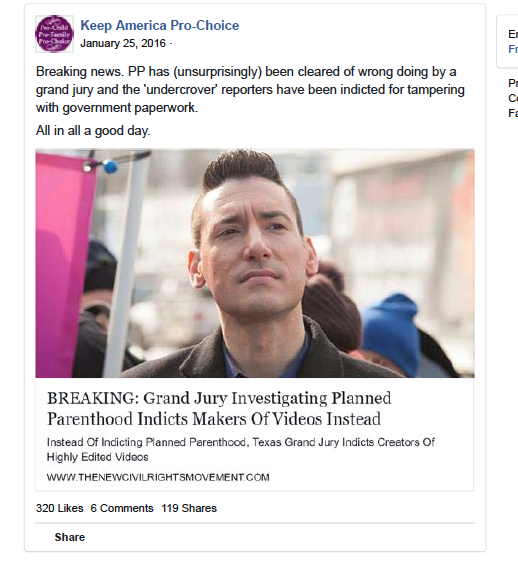 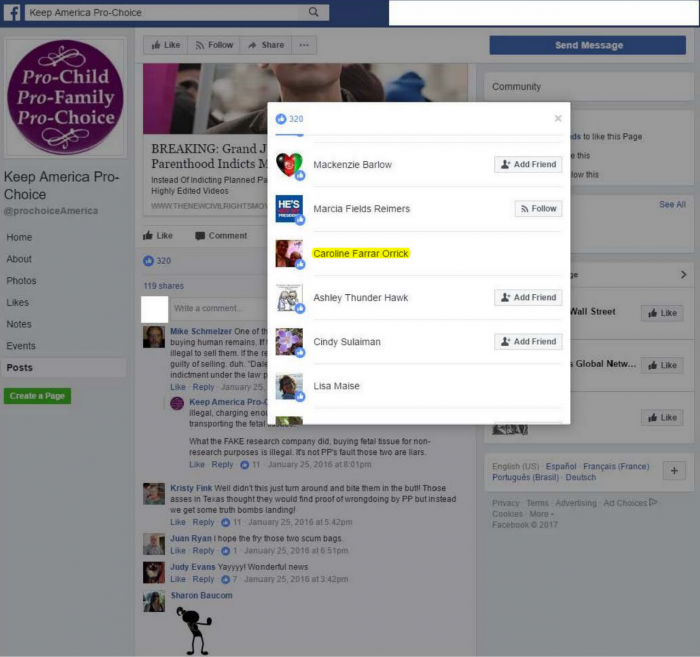 Daleiden also notes that the same Planned Parenthood affiliate that Orrick has a long history working with — Planned Parenthood Shasta Pacific — is a member of the National Abortion Federation (NAF), a plaintiff in the suit against CMP and Daleiden. However, Orrick “never disclosed to the defendants his extensive ties with Planned Parenthood,” Daleiden said.

As Daleiden notes, the judicial scales have been weighed against him from the beginning because of the weight Planned Parenthood carries with the judge:

Judge Orrick has a personal bias and prejudice in favor of Planned Parenthood and the National Abortion Federation and against the Center for Medical Progress and me. CMP and I feel unable to receive fair consideration of our arguments before Judge Orrick because we do not enjoy the close personal and professional relationship with him, forged over many years, that Planned Parenthood does.

When a judge who is charged with discerning and upholding justice is intimately connected with those who are filing a lawsuit, it should go without saying he should recuse himself from hearing a case. But in the case of Judge Orrick, he stayed on the bench and used every opportunity given him to restrict CMP from revealing anything it found in its investigation. When a video leaked out in May, it soon vanished from YouTube, causing a censorship outcry. It was soon discovered that Orrick had ordered its removal after it was released not by Daleiden, but by his attorney’s office. The judge threatened to hold Daleiden in contempt and ordered him to a hearing next week, on June 14, to decide that matter.

Daleiden’s attorneys contended that since the California Attorney General, Xavier Becerra, had “entered this footage into the public record by filing a public criminal proceeding based on it,” the civil order from Orrick did not apply. Orrick would have none of it and demanded that the video be pulled, but it was there long enough for people to see abortion workers making jokes about eyeballs of aborted babies falling into their laps, and discussing how much body parts are worth.

In a teleconference after the video release, Daleiden notes Orrick’s harsh and prejudical language about him, implying that he is violent and causes harm to people. The transcript of the the May 25 meeting includes this:

In his affidavit, Daleiden says in response:

I strongly believe in non-violent approaches to solving conflicts and I do not support, have never supported, and will never support vigilante violence against abortion providers. I do not believe instilling fear for personal safety is an acceptable tactic in public discourse about controversial issues. CMP’s videos communicate a strong message of non-violence and respect for human dignity, and it is impossible to derive from them any logical or moral justification for causing real harm to human beings. My work and my videos are directly motivated by trying to stop real harm to human beings and I am unaware of any evidence that has been presented to Judge Orrick that I “try to . . . cause real harm to human beings.”

CMP has argued from the beginning that it has exercised its First Amendment rights by exposing the truth about the abortion industry. Those exposed continue to rail against CMP with accusations that the videos are “highly edited” — a claim that has been debunked by two forensic analyses.

Daleiden is ready to face his accusers in a courtroom, but simply insists that the judge who hears the case against him not be in bed with the plaintiffs, as the evidence against Orrick seems to show he has been for decades. There can be no justice when the scales of justice are already tilted by the judge’s personal associations, and it is for that reason that Daleiden and CMP have filed the motion to remove Judge Orrick from the case.