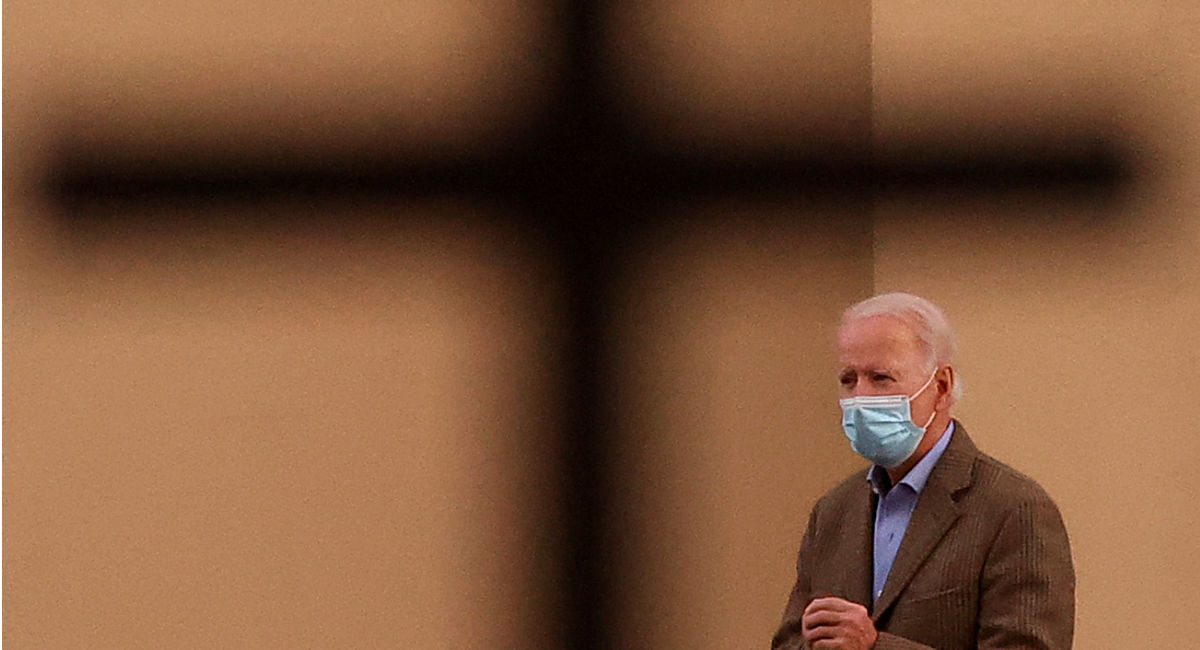 On Inauguration Day, hours after President Biden took the oath of office, an EWTN reporter asked Press Secretary Jen Psaki about Biden’s views on two important life issues — the Hyde Amendment and the Mexico City Policy. Psaki did not answer but instead redirected the topic to the president’s faith: “I will just take the opportunity to remind all of you that he is a devout Catholic and attends church regularly. He started his day attending church with his family this morning, but I don’t have anything more for you on that.”

Psaki’s answer is part of a deliberate theme Biden has employed to his political advantage, something that Live Action founder and president Lila Rose has criticized. “The president is using the Christian religion as a cover for his extreme policies and his promotion of abortion, and that is simply the worst kind of lie,” Rose said in a recent interview with NTD News. “And it’s what needs to be exposed.”

Archbishop Joseph Naumann, the chairman of the U.S. bishops’ pro-life committee, has also rebuked Biden’s duplicity. “The president should stop defining himself as a devout Catholic, and acknowledge that his view on abortion is contrary to Catholic moral teaching,” Naumann said, as reported by The Irish Post. “It would be a more honest approach from him to say he disagreed with his Church on this important issue and that he was acting contrary to Church teaching.”

Abortion is an “intrinsic evil”

While the Catholic Church does teach that certain political and moral issues are subject to prudential judgment, or an individual’s interpretation, abortion falls in the category of what is judged as an “intrinsic evil,” something that can never be justified. The phrase, explained by Pope John Paul II, has been used time and again by authorities in the Church, including the USCCB. Pope John Paul II explicitly categorized abortion as an intrinsic evil.

Further evidence of what the Catholic Church teaches on abortion can be found in the Catechism of the Catholic Church, clear compendium of the teachings that Catholics believe. It states that “from the first moment of his existence, a human being must be recognized as having the rights of a person — among which is the inviolable right of every innocent being to life.”

Catholics claiming the justification of abortion, like the notorious Catholics for Choice, find themselves at odd with the Church’s history. “Since the first century the Church has affirmed the moral evil of every procured abortion. This teaching has not changed and remains unchangeable. Direct abortion, that is to say, abortion willed either as an end or a means, is gravely contrary to the moral law,” the Catechism asserts.

Biden has repeatedly set himself against key moral beliefs of the Church whose faith he claims to profess. In 2012, during a debate with Paul Ryan, then Vice President Biden said that while he accepts that “life begins at conception” in his “personal life,” he would “refuse to impose it” on other people. He argued that he does not believe he has a right to tell “women they can’t control their body.”

But again, Biden’s own church calls out this line of thinking as unsupportable. “The moment a positive law deprives a category of human beings of the protection which civil legislation ought to accord them, the state is denying the equality of all before the law,” the Catechism teaches. “When the state does not place its power at the service of the rights of each citizen, and in particular of the more vulnerable, the very foundations of a state based on law are undermined.”

Biden’s divergence from defined Catholic teaching was noted by the U.S. Conference of Catholic Bishops (USCCB) on the very day of his inauguration. He cannot credibly leverage his faith and a pro-abortion stance with other Catholics, nor, as Press Secretary Psaki tried to do, use the Church as a cover for his actions. Biden’s insistence that he is a “devout Catholic,” and that this somehow justifies his support for abortion, simply does not jibe with reality.

And in fact, Biden is out of step with how most Catholics view themselves and view their church. A Marist poll conducted for the Knights of Columbus found that a large majority of self-described “practicing Catholics” — 64 to 33% — define themselves as pro-life.

Ultimately, pro-life leaders like Rose and Archbishop Naumann are correct to call out Biden for his attempt to justify support for abortion as rooted in his faith. Biden’s duplicity on the issue of abortion attempts to hide what is a fundamentally violent act behind a religion which stands for the opposite. It is a contradiction in terms, one that deserves to be called out for the deception that it is.