Even as far back as 1982, Planned Parenthood was killing children – in some cases, children who were alive outside the womb.

Joyce Craigg, employee of a Planned Parenthood facility in Brooklyn, worked in surgery assisting late-term abortions for two months. She then quit, emotionally shaken by what she witnessed. In the book Rachel Weeping and Other Essays on Abortion she recalls:

The doctors would remove the fetus while performing hysterotomies and then lay it on the table, where it would squirm until it died. One Catholic doctor would call for sterile water every time he performed a hysterotomy and baptize them then and there. They all had perfect forms and shapes. I couldn’t take it. No nurse could.(1)

A hysterotomy abortion is similar to a C-section, where an incision is made into a woman’s uterus and the baby removed. It is done late in pregnancy, but before the time when the baby can survive without medical assistance. It results in a living baby that must be allowed to die or be killed directly. These abortions were rarely done even in the 1980s; they were thought not to occur today. However, Secular Pro-Life had documented that they are still committed — according to a CDC report, which drew information from only 36 states — 45 abortions were done by hysterotomy/hysterectomy in 2013. We do not know how many were performed in the other 14 states.

The disadvantage of a hysterotomy procedure is obvious: the abortionist is presented with a live baby. Today, most late-term abortions are done by D&E, in which the baby is dismembered in utero with forceps, or by injecting digoxin directly into the baby’s heart to stop it, then inducing labor. Live births still occur with the latter method. You can see videos of a former abortionist explaining these procedures here.

Perhaps even more disturbing than the fact that Planned Parenthood was aborting babies alive is the account of the Catholic abortionist who baptized dying, aborted babies. That a Catholic doctor could kill children, and know he was killing children (because if they weren’t children, why be concerned with their souls?), is horrifying. He believed that it was morally acceptable to kill children, but baptizes them to help their souls. One has to wonder about the sanity of a person who has such twisted thinking.

Believe it or not, this is not the only account of abortion workers baptizing aborted babies, but it’s usually done at the request of the woman, not as a matter of course. For example, the director of nursing at one abortion facility says:

[W]hen it’s a big fetus, you will hear them asking a lot of questions: “[I]s it a boy or is it a girl?”, “Will it be baptized?” We’ve had many requests for that too. We do it, it doesn’t mean a thing. But if it rests somebody’s peace of mind, you baptize a fetus. I mean for the psychological effect. It’s not recognized by the church[;] how can you murder a fetus and then baptize it?(2)

Perhaps it was because of my empathy that they always asked me to do the baptism. It is difficult to do.(3) 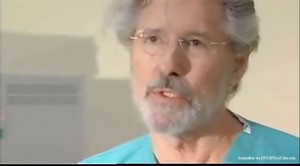 Another article says that abortionist Dr. Curtis Boyd gets similar requests from some of his patients:

Dr. [Curtis] Boyd is often asked by Native American women to bless the aborted [baby], and by Roman Catholic women to baptize it[;] He proposes that schools of theology develop special ceremonies and prayers to mark the loss [of the baby].(4)

These women obviously know they are killing a person. No one would think of baptizing a removed tumor or wisdom tooth.

The Catholic abortionist in this account is not the only doctor who performs abortions despite being religious. Abortionist Dr. Willie Parker claims:

The protesters say they’re opposed to abortion because they’re Christian. It’s hard for them to accept that I do abortions because I’m a Christian.

You can read about his alleged “Christianity” here.

Dr. Curtis Boyd, mentioned before, kills babies until 24 weeks. (At 24 weeks, up to 70% of babies born premature survive with medical assistance.) He is an ordained Baptist minister. He now considers himself a Unitarian. Boyd admits he is killing children, once telling a reporter: “Am I killing? Yes, I am. I know that.”

He says that after he commits an abortion he will “ask that the spirit of this pregnancy returns to god with love and understanding.”

These abortionists live in a twisted world where life is cheap and babies are disposable, even if they have eternal souls. With moral values this corrupted, it becomes even more obvious that the abortion business is truly evil.