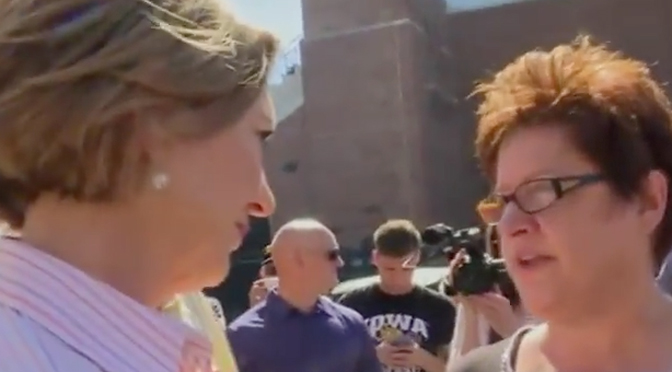 On the campaign trail in Iowa this weekend, Republican presidential candidate Carly Fiorina called out a Planned Parenthood supporter for spreading propaganda, rhetoric, and lies. Showing up in birth control costumes and pink garb, a handful of Planned Parenthood supporters yelled, screamed, and threw condoms at the only female GOP contender for the White House, while she campaigned at a tailgate party for the Iowa Hawkeyes. In the midst of this, another Planned Parenthood supporter approached, asking Fiorina “How can you as a woman not support our health care?”

Fiorina responded firmly, drawing the distinction between actual health care and abortion. “Oh, I support your health care,” she stated. “I don’t support the butchery of babies.” She then added, “Why is it that fetuses are born alive to butcher their brains?”

The GOP presidential candidate was referring to The Center for Medical Progress’s undercover videos, detailing the gruesome baby parts harvesting operation in which certain Planned Parenthood affiliates have admittedly participated. In one of the most disturbing CMP videos, Holly O’Donnell, a fetal procurement technician who worked for StemExpress, the same fetal tissue company that serviced Planned Parenthood, later quit after she was required to cut through the face of a yet living, aborted child to harvest his neural tissue.

Later in the conversation with the Planned Parenthood supporter, Carly questioned why this woman and those with her don’t support taxpayer funding for crisis pregnancy centers:

If you support women’s rights, then ask yourself this. Why is it Democrats won’t support taxpayer funding of pregnancy centers which also are focused on women’s health but don’t have an abortion agenda? They’re all privately funded. She was correct, according to a 2014 Open Secrets list of political candidates in federal races who received Planned Parenthood contributions.

Open Secrets, which boasts that they are the most comprehensive resource for federal campaign contributions, lobbying data and analysis available anywhere, also reported that in the 2013-2014 political cycle, Planned Parenthood’s political contributions broke down the following way:

As Fiorina ended her conversation, she called the Planned Parenthood supporter’s statements “rhetoric, propaganda, and lies.”

Fiorina is among several presidential contenders on the Republican side calling for the defunding of Planned Parenthood. This week Congress is in the process of deciding whether the federal dollars will continue to flow to the abortion chain’s coffers, something pro-lifers want stopped immediately.