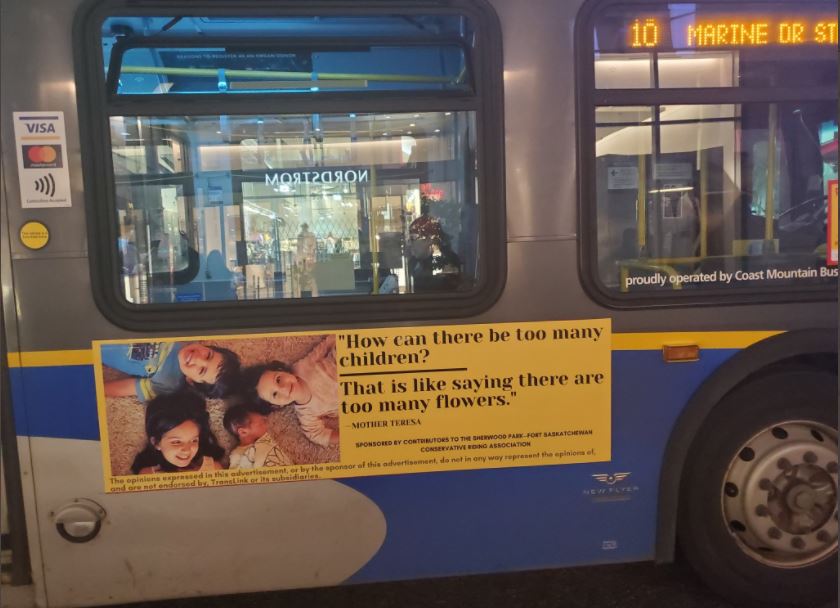 In response, Sherwood Park-Fort Saskatchewan MP Garnett Genuis initiated an ad campaign of his own, featuring a photo of four children and a quote from Mother Teresa: “How can there be too many children? That is like saying there are too many flowers.”

For those who are wondering about context, these ads are in response to population control ads run recently in the same area. Our response was fully crowd-funded. My comments on that here: https://t.co/0dTNUzeKXJ

After the ad began running, abortion advocates began attacking it. Almost hysterically, Vancouver Centre MP Dr. Hedy Fry claimed the ads attempt to dictate women’s reproductive rights. “Who has children?” she said. “Who are the ones who give birth to children? Women.”

Fry called for the ads to be removed, claiming they promote the narrative that women are meant to be “fruitful.” In addition to claiming she is concerned about women who are unable to have children, Fry said:

We don’t go around telling men what to do with their bodies, but we seem to think that this idea that women are creatures that other people can own and determine what happens to their bodies. It’s really something that I think is almost dystopian in the fact that we’re still saying these things, and we’re still not recognizing that women are human beings.

First, women don’t create babies alone. In addition, Fry’s claims are a straw man argument in which she has misrepresented the actual position of those who commissioned the ad. A quote from Mother Teresa about the beauty of children is not promoting any narrative about women’s bodies; it is countering the misguided idea that the existence of fewer children is somehow ‘more moral’ or ‘better for the planet’ than a larger number of children. It says, quite literally, nothing about women’s humanity or bodily autonomy.

Fry failed to express outrage over the “One Planet, One Child” ad that actually did attempt to dictate how many children Canadian women should have. Genuis’s ads are not directed at women, but at society, which not only fails to recognize the value of children, but the humanity of the 300 children who are violently killed in abortions every single day in Canada.

Some people posted a racist ad in Vancouver telling everyone to have only 1 or no children. I responded with an ad featuring my children, saying essentially that children are wonderful. @HedyFry complained about the second ad, but not the first. #partisanpolitics #cdnpoli pic.twitter.com/ytysNea0KU

Genuis responded to critics by stating that the ads were not about abortion, were not paid for by the government, and were in response to the population control motives of the “One Planet, One Child” ads, which were pressuring women and couples to have only one child. Genuis believes that parents of large families should be celebrated, not stigmatized.