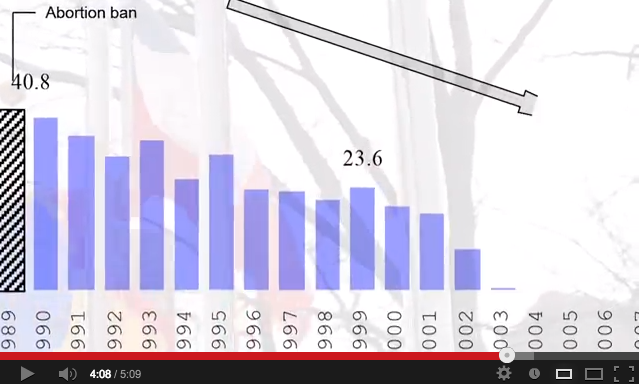 Would you expect a country that prohibits all abortion to have a higher or lower rate of maternal mortality?

Would you expect a country that prohibits all abortion to have a higher or lower rate of maternal mortality? Can countries which prohibit abortion achieve a standard of maternal health care comparable with those that permit abortion?

The answer revealed in a new video, which sets out to answer these questions from a scientific and medical perspective, may surprise you:
[youtube http://youtu.be/8WeuP0Eg5aw&w=560&h=315]

Medical experts in maternal health care testified before the United Nations Commission on the Status of Women in March that direct abortion is not necessary to save the life of the mother in any circumstance. Several of the speakers were panelists at the International Symposium on Maternal Healthcare, which released the Dublin Declaration last fall.

Despite the claims of abortion advocates, the weight of scientific evidence over decades of research demonstrates that abortion is not a rational answer to maternal mortality. In reality, education and access to higher-quality health care (especially better access to prenatal and perinatal care) decrease maternal mortality most effectively, not access to abortion.