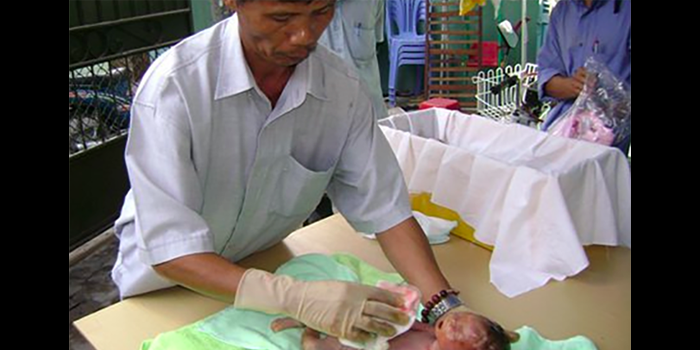 Over the last decade, Tong Phuoc Phu from Vietnam has buried more than 10,000 aborted babies, giving them each a final resting place. But he wanted to do more, he wanted to save babies from abortion. And now, he’s done just that.

Tong told the RT news network that after his wife experienced complications during labor with their son, he made a deal with God that if his wife and son were spared, he would find a way to help others. Tong and children from his orphanage. Photo via Facebook.

It was then that he took notice of the fact that some pregnant women were entering a room at the hospital which they then emerged from, no longer pregnant. When he realized the children were being aborted, he asked the hospital for permission to take their bodies for a proper burial.

“I believe these fetuses have souls,” he said. “And I don’t want them to be wandering souls.”

Tong, a Catholic from the town of Nha Trang, purchased land with his savings and began burying the babies. He has said that the cemetery he created isn’t just a place of sadness, but a place that he hopes will inspire women to choose life. Abortions have outnumbered births at state hospitals in Ho Chi Minh City. Pre-martial sex, lack of understanding or desire for contraception, and gendercide have led to the extremely high abortion rate.

After a while, pregnant women who had heard of what he was doing began to reach out to Tong for help. They knew they weren’t able to care for their children, but they didn’t want to abort them. So Tong created an orphanage where he has taken in and cared for over 100 children. Each mother can stay there while pregnant, and those who place their babies with Tong are able to come back for their children when they are in a better place to care for him or her.

“I actually went to the hospital intending to get an abortion, but I was so scared,” said a mother named Vu, who was 3 1/2 months pregnant at the time. “I decided to go home and think about it. Two weeks later, I met with Phuc.”

In the meantime, the children are well cared for at Tống Phước Phúc Orphanage when they otherwise may have been aborted. Despite the cost, he has never turned anyone away and donations have allowed him to continue.