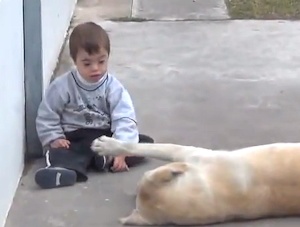 There’s a new A-team in  Buenos Aires: meet Himalaya the Labrador and three-year-old Hernan. Hernan was born with Down syndrome, and, according to his mother, he is a very guarded little boy. He doesn’t connect very much with other people. But that didn’t stop the beautiful Labrador Himalaya from striking up a friendship. Himalaya patiently nudges Hernan until the little boy warms up to him. A four-minute YouTube video, shared by Hernan’s mother, captures the scene as the new friendship was formed.

It took over three minutes of gentle interaction on Himalaya’s part before Hernan finally leaned in for a hug. But it was worth the wait: the video’s heartwarming ending is sure to have you hitting repeat, and sharing the story with friends and family. In a culture where Down syndrome children are often not recognized as the treasures that they are, stories like this one are encouraging.

In honor of Down Syndrome Awareness Month this October, check out some of Live Action’s past pieces on heartwarming children and adults with Down syndrome.

William and Kate accept artwork from woman with Down syndrome

Baby with Down syndrome becomes model for prestigious fashion designer