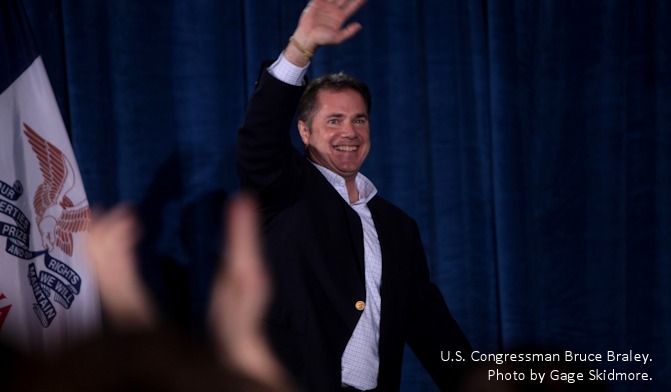 Rather, it’s because “[a]nti-choice Republicans are about to take over the Senate–and Mitch McConnell has already said that one of the very first things he’ll do is pass a ban on abortion after 20 weeks.” For evidence of the impending takeover, Ms. Hogue pointed to the Iowa senate race, where “polls say the anti-choice candidate is ahead by 2.5 points.”

That “anti-choice candidate” would be Joni Ernst, an Iraq War veteran and mother of one who’s made the choice to try and become Iowa’s first female senator. Her opponent is Democratic Congressman Bruce Braley. Not all of Braley’s comments have gone over well–earlier this year, video footage surfaced in which he can be seen dismissing Republican Senator Chuck Grassley as just “a farmer from Iowa, who never went to law school.” Although the congressman isn’t always wise with his words, he is smart enough to know one thing: late term abortion isn’t all that popular.

Most people don’t feel particularly good when they think of a late term abortion (stories like this probably don’t help). It could be due to concern the fetus will suffer, and there’s certainly evidence for that. Dr. Kanwaljeet Anand’s research at the University of Tennessee suggests a fetus can experience pain by the 20 week mark, which is somewhat disquieting when you consider what an abortion at that stage involves.

Or it might stem from the idea that a viable fetus should have a chance to live outside the womb. Not that abortion providers want to see that happen, of course–while Giana Jessen and Melissa Ohden both survived botched late term abortions, surviving infants are often either denied medical care or just murdered. Planned Parenthood  seems to be fine with that approach: when a spokesperson for the group was asked in March of 2013 what should happen to a baby who lives through a failed abortion, she said the decision should be left up to “the patient and the healthcare provider.”

Whatever the reason, Rep. Braley knows that late term abortion isn’t something he wants to be associated with. In fact, he declared during a debate with Ersnt that “I oppose all late-term abortions that aren’t necessary to save the life or health of a mother.” While that may have been a popular declaration, Braley’s record shows that it wasn’t an honest one. Not only did the congressman vote against a ban on abortions after 20 weeks, he even cosponsored a piece of federal legislation that would have rolled back the majority of abortion rules.

Polls show there’s widespread support (particularly among women) for outlawing most late-term abortions. Rep. Braley knows that, which is why he can’t be truthful about his position on the issue. I’m definitely not wishing a panic attack on Ilyse Hogue, but if Iowans learn the facts about Bruce Braley, then I suspect she’s going to have one.