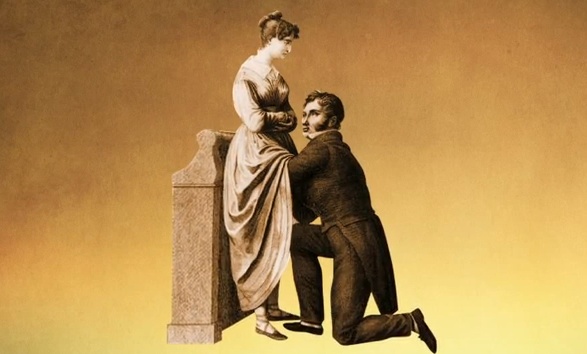 I kid you not.

Polls show that a number of pro-life candidates have a good shot at winning this November, and that includes aspiring North Carolina senator Thom Tillis. Tillis has been endorsed by the pro-life Susan B. Anthony List in his race against the Democratic incumbent, Kay Hagan. In response, NARAL compared pro-lifers to sexual predators in a new ad featuring the image above. I suppose it’s not surprising that a pro-abortion group would take this approach. After all, most people feel comfortable talking about what they know. When it comes to helping sexual predators, NARAL’s friends at Planned Parenthood know plenty.

If a girl between the ages of 13 and 16 becomes visibly pregnant, questions are probably going to get asked. And, if you’re the one who got her pregnant, then there’s a good chance you don’t want those questions answered. That’s especially true if you happen to be the girl’s father, stepfather, soccer coach, or just the neighborhood predator. The good news (for rapists) is that Planned Parenthood, America’s largest abortion provider, is ready and able to make that suspicious baby bump disappear.

John Blanks, Jr. brought his daughter to Planned Parenthood after he impregnated her; clinic staff aborted her baby and then turned the victim back over to her abuser. They did the same with Timothy Smith’s stepdaughter. Gary Cross’ stepdaughter got similar treatment. So did Denise Fairbanks. Adam Gault also found Planned Parenthood to be helpful: he brought his teenage rape victim there when he found out she was carrying his child. While it’s true that all of these men were eventually caught, easy access to abortion allowed them to avoid suspicion and keep abusing their victims for months or even years.

Evidence compiled by Life Dynamics suggests that these incidents are far from unusual. In 2002, the group recorded nearly 800 telephone calls in which an actress contacted Planned Parenthood and National Abortion Federation centers. During each call, the actress claimed to be a 13 year-old who had been impregnated by her adult boyfriend. In 813 cases, staff at these facilities offered to set up a secret abortion for her. The fact that this would perpetuate an exploitative relationship didn’t seem much of a concern.

These cases are also consistent with what’s been said by some of Planned Parenthood’s staff. Former clinic director Abby Johnson and 6 other  ex-employees signed an open letter to Congress stating that Planned Parenthood’s policies and procedures are inadequate to protect women from violence and coercion. The letter included a pledge to assist in any Congressional investigation of Planned Parenthood, an idea that Connecticut senator Richard Blumenthal and other prominent Democrats have condemned as a “witch hunt.”

Generally speaking, Americans aren’t happy when their tax dollars are used to cover up sexual abuse. NARAL understands this, just as it knows that hiding exploitation seems to be routine at Planned Parenthood. So, it’s understandable that the group would panic over the election of pro-life lawmakers. Simply put, they don’t want to face officials who will investigate Planned Parenthood or cut off its nine figure funding.

And it’s not just Kay Hagan’s seat that abortion proponents are worried about; there are other close senate races in Montana, Colorado, and Alaska that have them concerned as well. Pro-lifers should be aware of this situation and keep talking about it. They can also sign Live Action’s petition calling for an end to federal funding of Planned Parenthood. You can find it here, along with more proof of Planned Parenthood’s corruption.

As it stands, NARAL and Planned Parenthood have a lot to lose in November. That’s bad news for the abortion industry and the abusers who depend on it.