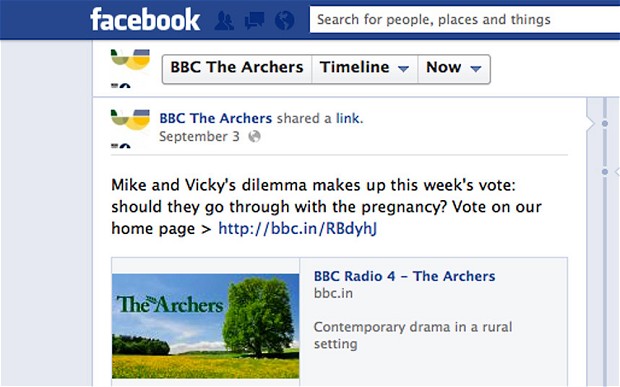 Abortion is a personal decision? Let’s poll everyone!

“The Archers” is a British radio soap opera with over five million listeners. It’s also the longest-running soap opera in the world, on radio or TV. Recently, they aired a storyline featuring a middle-aged couple who discovered that they were expecting a baby with Down syndrome. Rather than using this as an opportunity to promote the inclusion of people with Down syndrome, producers decided to trivialize both Down syndrome and abortion by posting a poll asking if the couple should abort the baby or not. 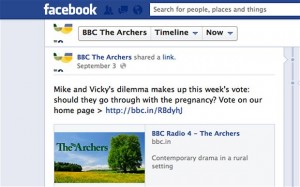 The characters, Mike and Vicky Turner, recently learned from the results of an amniocentesis that their unborn baby has the syndrome.

The programme’s official Facebook page invited listeners to vote on what the couple should do next.

A message read: “Mike and Vicky’s dilemma makes up this week’s vote: should they go through with the pregnancy?”

Listeners complained that the BBC was treating a serious issue so lightly.

After the massive outcry for the poll to be removed, the BBC capitulated and released a statement.

A BBC spokesman said: “The Archers storyline on Mike and Vicky’s pregnancy has been well-received by the audience and raises a number of important issues about Down’s Syndrome, informed by the advice and expertise of the Down’s Syndrome Association.

“However this issue is too complex and sensitive for an online poll and we regret any offense the poll may have caused.”

Not only is it too complex an issue for a simple yes/no poll – as if a child’s life is something you can throw away that cavalierly – it’s truly disappointing to see that a program that can reach so many people isn’t taking this as an opportunity to do some good toward people with Down syndrome. The majority of children with Down syndrome – those diagnosed prenatally, anyway – are aborted. That’s a fact, both in the U.S. and in the U.K. Showing a couple struggling with the diagnosis, as is normal, but refusing to kill their child and loving him/her anyway could do so much more good than having the characters just decide, “Well, our kid is broken, so let’s kill it.” And while the poll was removed, the BBC still called the news awful. Because finding out your baby with Down syndrome is, you know, awful.

When people wonder why so many babies with Down syndrome are aborted, you can find the answer right here. We’re told it’s awful, a tragedy, that the child will certainly suffer. The truth about raising a child with Down syndrome – that families tend to be happier than those who don’t have a child with Down syndrome, that people with Down syndrome are overwhelmingly happy with themselves and who they are – is never mentioned. No wonder people have such a dim view of things. That’s how it’s framed in the general public. And here the BBC has a storyline featuring a Down syndrome pregnancy, and they’re going right down the easy-to-take, expected road. Getting the diagnosis is terrible. This is horrible for them, and whatever decision they make will be awful. Blah, blah, blah.