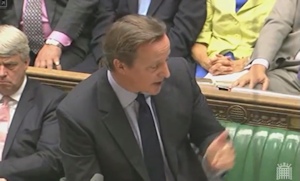 In a video released by the Christian Institute, Britain’s Prime Minister David Cameron was asked for his response to government-sanctioned sex-selection abortions of pre-born females in his country. He was asked whether he was concerned that the incident, in which doctors were not prosecuted for allowing abortions with the sole purpose of ending the lives of unwanted baby girls, had put Britain’s abortion laws on par with those of India and China (countries notorious for the systematic abortion and infanticide of females, who are a less-desired sex in those countries). The questioner pointed out that, due to this injustice in Britain, “a female fetus in the womb today is more vulnerable than she was last week.” Prime Minster Cameron’s responded, saying:

Let’s be clear that abortion on the basis of the child’s sex are wrong and illegal in our country. And I think the Daily Telegraph is to be commended for the campaign and the work that they have done to highlight this important case. But in our country we do have independent prosecuting authorities. It’s very importance that they look at the evidence and they make a decision on the basis of likelihood of getting a conviction and the public interest in making a case and taking it to court. That’s how things have to work in our country, but I share her concern about what we’ve read and what has happened and it’s absolutely right that professional action should be considered as well.