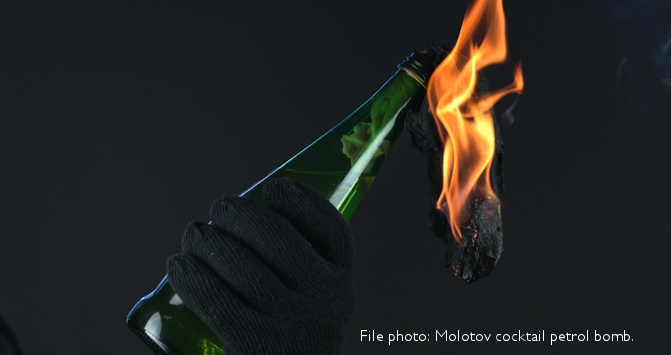 A group of Central Texas Coalition for Life volunteers were praying outside an Austin Planned Parenthood facility when a woman threw a homemade bomb into their midst.

Central Texas Coalition for Life notes that the bomb was a Molotov cocktail, also known as a petrol bomb, made by filling a bottle with highly flammable liquid,  soaking a rag in that liquid – usually gasoline or high-proof alcohol – then lighting the rag on fire before throwing the bomb at its intended target.  This type of bomb can be extremely dangerous.

Thanks to the quick action of one pro-lifer who stomped out the flames before the bomb could explode, no one was injured in the attack. Had the Molotov cocktail exploded, injuries and possibly deaths could have occurred.

The woman who threw the Molotov cocktail is now in custody. Pro-lifers obtained her license plate number as she fled the scene, and reported it to police who later apprehended the suspect. At this time, it is not clear what charges she will be facing.

In a press release, the Central Texas Coalition for Life asked for prayer for the woman. The group’s executive director, Heather Gardner, said:

We know that many women are hurting from past abortion experiences. One of the ways people sometimes lash out is through anger and violence. We pray for this woman and pray for healing in her heart if she is hurting from a past abortion,

At this time, it is not known whether the suspect is post-abortive.

Board President Abby Joynson made the following statement:

In the culture of death perpetrated by abortion supporters, it is no surprise that they would respond to our pro-life efforts in this violent way. We must remember that this type of incident is very rare and it will in no way deter us from offering real options to women walking into abortion facilities. We are here to promote peace in and out of the womb, something abortion supporters do not understand.

Violent actions by pro-abortion activists are often not covered by the mainstream media. There have been cases of assault, threats with weapons, and even murders of pro-life activists in the past. Typically, these events receive little media attention and the general public never learns of them.