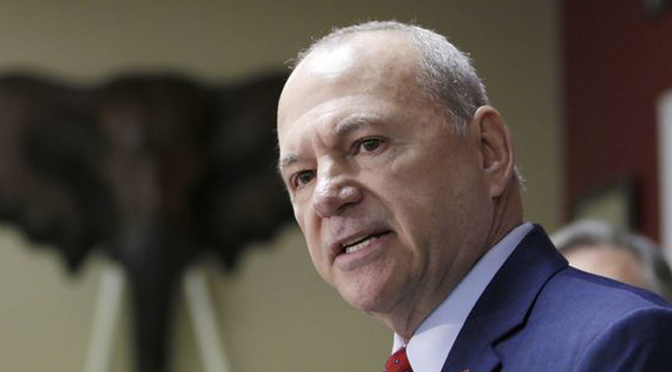 As the truth about Planned Parenthood is revealed to those who believed it was simply a women’s healthcare organization, people are turning away, disassociating themselves with a baby parts trafficking business which even harvests organs from born alive infants. I’ve chosen to join the Republican Party because I firmly believe that the conservative values they represent best align with my own personal beliefs and convictions.

He noted in his remarks that the recent Democratic Party of Arkansas’ stance regarding Planned Parenthood and the state of Arkansas’ previous funding, which Gov. Asa Hutchinson called to end, was cited as a major reason for Holcomb’s switch.

Arkansas Governor, Asa Hutchinson, who recently defunded Planned Parenthood as part of the growing list of states that are distancing themselves from financially participating with the abortion giant, was at the press conference Thursday where Holcomb announced the switch and said that it’s not possible for Arkansas Democrats, who may think themselves more conservative, to separate themselves from the national Democratic party on issues such as abortion.

Of course, Arkansas Democrats weren’t happy. Democratic Party of Arkansas chairman Vince Insalaco issued a statement that shows the continued ignorance of what Planned Parenthood is all about when he pulled the “health care” card from the worn deck:

If standing against women’s health care including Pap smears, breast cancer screenings, STD testing and treatment, pregnancy testing, prenatal checkups, or the equality of all Arkansans is important to Rep. Holcomb, then he’s found a good home in the Republican Party of Arkansas.

Of course Insalaco proves he doesn’t know about the programs he supports, since every service Planned Parenthood offers – apart from abortion – is available at low or no cost clinics nationwide, including in his own state. Reducing Holcomb’s switch to some narrow-minded decision to steal health care from women is not a surprising attack, but it’s also not a true one.

Holcomb has done what those with a conscience must do when seeing the truth behind the pink Planned Parenthood shingle: run. Holcomb, who serves District 10, has “spent 28 years in public education and is a past Jefferson County judge. He is vice chairman of the House Committee on Public Transportation.”

It’s becoming apparent that Holcomb will be just one of the first to leave the party that is supporting bloodshed, fetal parts harvesting and now, as we have seen, infanticide.