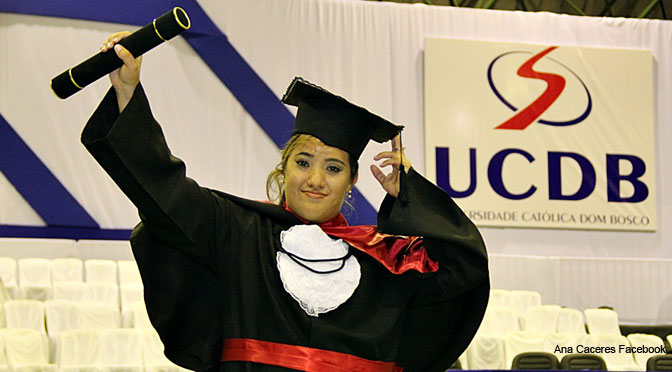 Latin America’s ongoing Zika epidemic has renewed abortion debates in several countries. The Zika virus, which is still somewhat of a mystery to experts in science and medicine, is carried by the Aedes aegypti mosquito, and is believed to cause microcephaly in preborn babies.

El Salvador’s Health minister has recently argued that due to the dangers to preborn babies presented by the virus, abortion restrictions should be revised. Colombia and Brazil are also experiencing surges in support for abortion due to the epidemic. But is abortion really the answer?

24-year-old Brazilian journalist Ana Carolina Caceres does not seem to think so. Ana was born with microcephaly – the condition believed to be connected to the Zika virus. When she was born, doctors said she would never walk or talk, and would soon die. But she proved them wrong. Ana pursued journalism to give a voice to those who do not feel represented. Recently, she shared her story with BBC.

… [T]he health minister… said that Brazil would have a “damaged generation” because of microcephaly. If I could speak to him, I would say: “What is damaged is your statement, sir.”

… I believe that those who have abortions are not giving their children a chance to succeed.

I survived, as do many others with microcephaly. Our mothers did not abort. That is why we exist.

Ana goes on to detail the real struggles she and her family had to endure, including expensive medical bills – even as her father was unemployed at the time of her birth. She endured intense treatment, operations, and even seizures. Living proof that life and hope can overcome anything, Ana felt “offended and attacked” when she heard that abortion activists were using the Zika epidemic as a platform to promote abortion…

I believe that abortion is a short-sighted attempt to tackle the problem. The most important thing is access to treatment: counselling for parents and older sufferers, and physiotherapy and neurological treatment for those born with microcephaly.

Ana is right. Abortion is an extremely short-sighted “solution” to the problem. Arguments that abortion should be enacted due to the danger to unborn babies are self-defeating: how is ending a life saving it from danger, especially when people like Ana have demonstrated it is possible to overcome microcephaly and lead an amazing and successful life? Clearly, it is not. It is unfortunate that abortion activists are willing to use a tragedy to further their own political agenda, while largely ignoring the real stories of people who have been through similar tragedies, people like Ana.