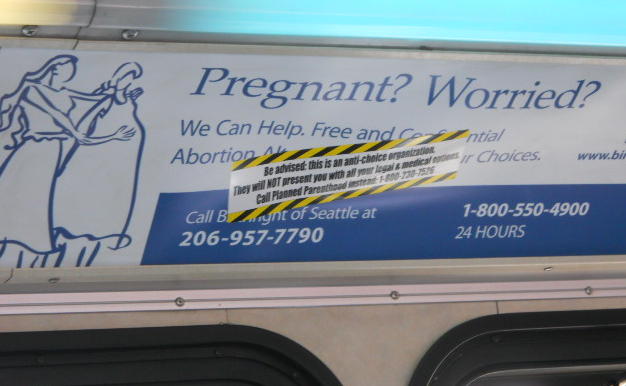 Not fighting fire with fire. Something better.

Pro-abortion activists are praising someone who vandalized a pro-life pregnancy resource center’s advertisement on a major bus route in Seattle, WA with this sticker:

The sticker reads: “Be advised: this is an anti-choice organization. They will NOT present you with all your legal & medical options. Call Planned Parenthood instead: [number].”

Vanessa of Feministing: “Bad-a** of the Day. Awesome.”

Kaye of Upworthy: “Something pretty awesome happened – it got sticker-bombed”

Shelby of SK: “This is fabulous! Go random Seattle activist doing good in the world.”

All these pro-abortion activists seem to think this vandalism is justified because pro-life pregnancy centers don’t present women with all their “choices.” But of course we know it is Planned Parenthood that regularly misinforms, makes distortions, and lies to women about their total range of options (including adoption).

After all, what woman doesn’t already know about abortion? Instead, it’s the many, many women who don’t know the full range of abortion alternatives and types of support for pregnancy who need to be reached through effective advertising such as bus and metro ads like this one. The sticker pretty clearly obscures this bus ad claiming to offer “abortion alternatives,” so how can pro-aborts accuse this pro-life center of false advertising?

I think we need to respond to this act of vandalism aggressively. Here are a few ways we can do that (please share your additional ideas in the comments!):

I’m open to other ways of responding, but these are the top three that come to mind for me. I don’t know about you, but I’m sick and tired of pro-abortion activists gloating after they break the law and endanger more young women (and unborn children!) by harassing legitimate pro-life initiatives.