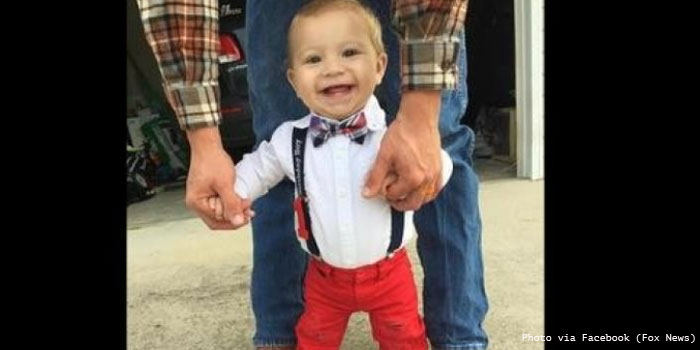 Little Liam Stephenson has just celebrated his first birthday, something his parents feared would never happen after he was diagnosed with bacterial meningitis at birth and was given just a 5 percent chance of survival.

Bacterial meningitis can cause blood poisoning, brain damage, loss of hearing, and sometimes the need to amputate limbs.

News of Liam’s poor prognosis broke last year after his family requested prayers via social media. Liam had been in the neonatal intensive care for six weeks when an MRI showed possible brain damage and bleeding on the brain. His family was scared they were going to lose him.

“They gave him a five percent chance of living and if he did he was not going to be able to hear good, talk, crawl, or walk,” his aunt Jana Blankenship told Fox 5 in Atlanta.

READ: Baby girl born with brain outside her skull is meeting all milestones

Liam, however, had other plans. He spent just over a month in the NICU before doctors declared him well enough to go home with his family. After being discharged, Liam returned to the hospital 10 times because of seizures. Now, however, Liam is thriving. His aunt said the bleeding on his brain is gone and the seizures have stopped.

Blankenship said that despite doctor’s predictions, Liam’s hearing is nearly perfect, he is able to say some words including “mama” and “daddy”, and he is learning to walk. The family is grateful for the prayers and thank God for Liam’s healing and ability to overcome the obstacles placed before him in the first weeks of his life.

“I would like to believe it was because of y’all and those prayers Liam will be celebrating his first birthday,” said Blankenship. “God is good, God is great, and may he bless y’all.”

Liam’s family never gave up hope that the baby boy would recover from meningitis, something all parents should remember. Liam has proven that not only can doctors be wrong, but that even when children are faced with obstacles and the odds seem stacked against them, they can not only pull through but exceed expectations.