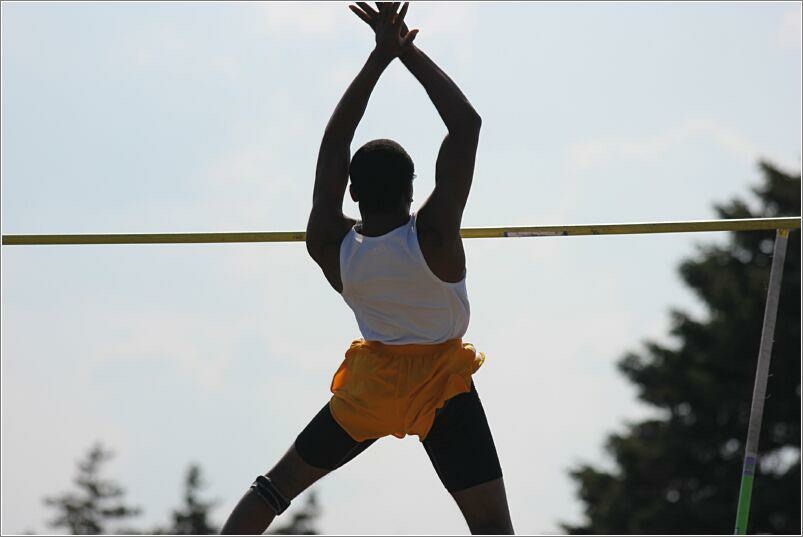 David Biondo graduated from high school last week, an accomplishment in question when he was born as a cocaine-exposed baby with a .32 blood alcohol level, four times the legal limit of intoxication. David had other significant complications, and the odds were against him from the start. But that never stopped this state track champion who is about to begin college.

David’s adopted father, Tim Biondo, says he and his wife, Charlene, didn’t have to think hard about whether to take David, who was seven days old at the time,  as a foster child when Catholic Charities called. They already had another child from his birth mother, and this was an encore call.

“As it happened twice before, my wife, Charlene, called me at work.  She said, ‘Catholic Charities just called. Michael’s birth mother just had another baby, a boy. They want to know if we will take him in.’”

“Of course we said yes,” Tim Biondo said. “Everyone deserves a chance.  Everyone!”

David was number four in the house when Charlene went to the hospital to get him:

“David came home from the hospital hooked up to a heart monitor, which he wore for many months,” Tim Biondo said. “Unlike his brother, Michael (also drug and alcohol exposed), who cried non-stop and who never slept for more than 15 minutes straight for the first two months of his life, David slept, a lot. David slept for many hours— too many hours. David’s recovery from the drugs and alcohol was totally different from Michael’s, and we had no idea if that was a good thing or bad.”

But they never questioned taking David. Even as a foster child, David was becoming their own son. And the Biondos wanted him to have every chance available to thrive. They had learned in their foster parent training that it was vital to get a foster child assessed early on in order to have the best chances for success. So David received several therapies, including occupational, speech and vision. David’s father says:

“This all didn’t bother David too much.  David is a hard worker.  He’s as hard a worker as I’ve ever met.  He’s had to be to overcome many of the challenges he would face early in his life. David often needed to work harder than most everyone else.  It often took David longer to do certain things, to achieve certain goals throughout his life.  But work hard he did.”

Tim and Charlene eventually adopted David. They credit years of prayer and hard work on the part of many people, therapists, teachers, family, with David’s successful story.  “God, and many wonderful people in our support system, have answered our prayers,” Tim Biondo said.

The first of two crowning achievements of David’s high school track and field successes came in January when he competed in the Illinois Indoor State Track and Field Championship, where he placed second in the pole vault, with a height of 13 feet, 6 inches. And although David graduated from high school this past week, he was not in attendance for graduation because he was away competing at the Illinois state high school  track and field meet. David again competed in the pole vault and came in seventh in the entire state; his highest jump at the state meet was 13 feet, 9 inches. Additionally, David also holds his high school record in the pole vault  with a height of 14 feet, and he competed in several other  running events, as well.  His dad says David continues “to reach greater heights, on the track and in life.”

Everyone at Carmel Catholic High School clearly knows what a success David is, too. Though he was not able to attend his graduation, Tim relays a message from his sister-in-law who did attend:

“When they announced David’s name at graduation they paused and explained why he wasn’t there and the entire place erupted into cheers. It was very cool!! Please tell David!”

There will be more of a chance for applause to erupt as David takes his talent to the collegiate level this fall, when he will attend St. Francis University. The baby who seemed to be born without much promise for a full life has shown everyone that not only is all life valuable, but even the weakest of babies born in the toughest of circumstances. David is a superstar to all who know him, not only for his athletic success but for the character and person he has become. And this is all possible because David’s birth mother chose life. His father says:

“We pray often, thanking God that David’s birth mother chose life for David.  She choose life in spite of some incredibly difficult situations. Everyone deserves a chance.  Everyone! Years of having to work harder than most everyone in school, he will attend. Life is precious, always!”