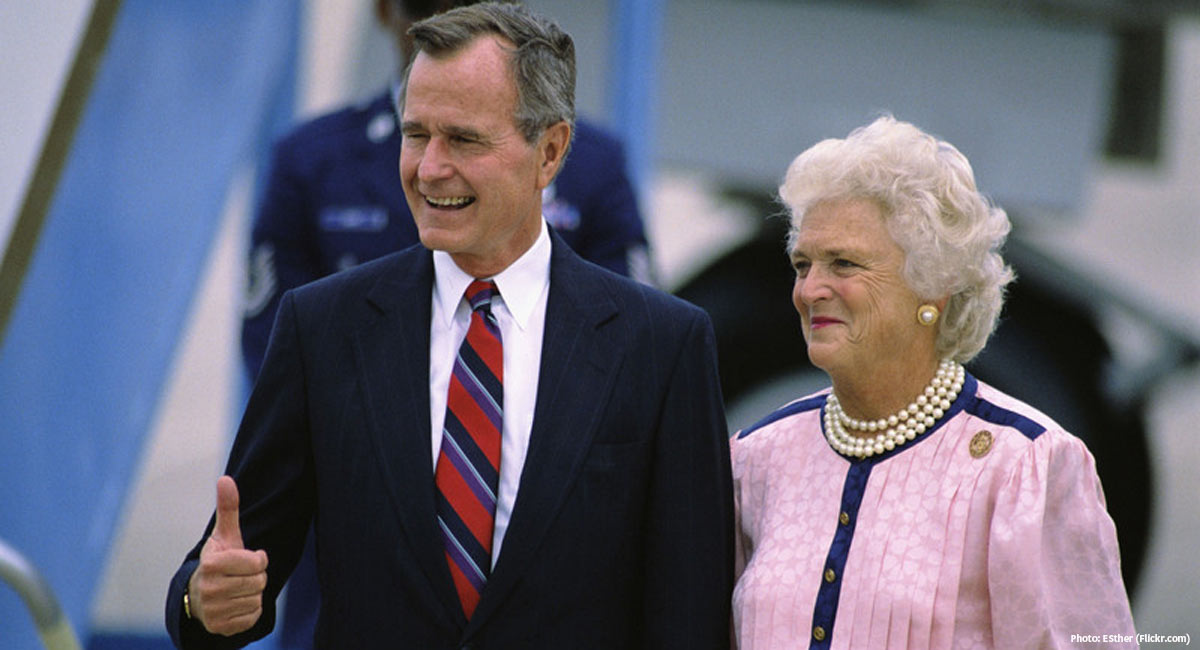 As the nation has been captivated by the film ‘Unplanned,’ a new book about former First Lady Barbara Bush quietly dropped in its shadow, drawing a stark contrast with the views expressed in the pro-life film.

It wasn’t a secret that Barbara Bush was pro-choice, but her logic behind it was never revealed until recently, and it turns out that was probably better. The late Mrs. Bush, who passed away in 2018, was a remarkable First Lady in many ways, and was treated as “everybody’s grandmother” by various media outlets. But her views on abortion were a contradiction of the character that made her an example for women everywhere.

Last week’s new book by Susan Page, The Matriarch: Barbara Bush and the Making of an American Dynasty, reveals pages from Mrs. Bush’s personal journals, which Page was allowed to read. An article in The Atlantic previews this book and discusses these views. Page explains the politics behind Bush’s public façade, explaining how her husband modified his own abortion stance when Ronald Reagan chose him as his running mate.

Mr. Bush supported the GOP platform and a constitutional amendment to overturn Roe v. Wade, while Barbara Bush, Page continues, “often found herself at odds with the GOP and its increasingly conservative tilt. ‘In all our years of campaigning, abortion was the toughest issue for me.'” The starkest contrast came to a head in 1980, when it looked as if George H.W. Bush’s prospects as Reagan’s running mate were off the table. Mrs. Bush went to a Republican Women’s luncheon “sporting a pro-choice button.”

But her openness went behind closed doors again when her husband was selected as Reagan’s running mate after all. Page writes that Mrs. Bush saw abortion as a “moral question,” and took the issue “seriously,” characterizing her thought process on abortion as “careful.” But in truth, Mrs. Bush rationalized the abortion issue in a way few would see as logical. In her book, Page discusses looking through Mrs. Bush’s “accounts of her endless, exhausting campaign travel” and finding “what was in effect a conversation with herself.”

“Thoughts on abortion,” she wrote across the top of the first page, underlining the words…While she said the law permitting abortions had been “abused” and called the number of abortions “unacceptable,” she added, “For me, abortion is a personal issue—between the mother, father, and doctor.”

It was in this early memo that she crystallized the issue in her mind.

And here is where Mrs. Bush drops her bomb, as well as her ineffective syllogism:

Her argument that somehow life for a human only begins when she perceives a soul enters a body is distorted. It’s a twisted perception of reality that resembles something a late-term abortionist would say.

But the reality is, Mrs. Bush has quite a history of pro-abortion praise. In 1989, she lauded a ruling that allowed a comatose woman to have an abortion, which is one of many places Mrs. Bush is referenced as publicly supporting abortion rights.

Many subscribe to the idea that Bush’s perception is partly the result of the tragic loss of her own second child, daughter Robin, who died of leukemia in 1953 at three years old. Bush writes:

Judging from both the birth and death of Robin Bush, I have decided that that almost religious experience, that thin line between birth, the first breath that she took, was when the soul, the spirit, that special thing that separates man or woman from animals + plants entered her little body. I was conscious at her birth and I was with her at her death. (As was G.B.) An even stronger impression remains with me of that moment, 27 years ago [when she died]. Of course, extreme grief, but that has softened. I vividly remember that split second, that thin line between breathing and not breathing, the complete knowledge that her soul had left and only the body remained.

Page continues from her recent reading of Mrs. Bush’s notes:

“What do I feel about abortion?” Bush continued in her distinctive handwriting, almost no words crossed out or reconsidered. “Having decided that the first breath is when the soul enters the body, I believe in Federally funded abortion. Why should the rich be allowed to afford abortions and the poor not?” She said she could support limits on the timing of abortions—“12 weeks, the law says”—but she wrote it was “not a Presidential issue,” underlining not twice. “Abortion is personal, between mother fathers and Dr.”

Tragically, Barbara Bush, with her compassion and candor, missed the pivotal lesson on biology. Life begins at fertilization. Science has explained this for far longer than Mrs. Bush’s musings in her yellowing journals. It’s certainly understandable that in our human compassion we want to end the suffering of those we can see — such as the comatose woman, or the poor woman who was a victim of incest — by rationalizing we’re not really killing their preborn children if we can’t see them. But we are.