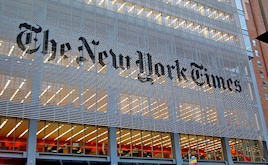 “I did not expect such distortion within the pages of America’s most historic newspaper.”

A house divided against itself cannot stand. The words of Jesus cross religious lines, because they are a true principle of living. In a recent article in the National Review, ChinaAid president Bob Fu rebuts a  New York Times article from last week which miscategorizes his work and motives with Chen Guangcheng, the outspoken Chinese legal advocate who has been a voice against China’s forced abortion policies.

Fu, who helped Chen, was the subject of the Times article, which criticizes him as having false motives for his work and accuses him of labeling Chen an opponent of abortion rather than an opponent of forced abortion. The Times says:

Critics say Mr. Fu overstated his own role in the audacious escape and then made use of Mr. Chen’s story in fund-raising appeals to his evangelical Christian supporters. Those appeals sometimes cast Mr. Chen as an opponent of abortion. Despite his opposition to forced sterilizations and abortions, Mr. Chen has said he has no position on the divisive issue.

I’ve never mischaracterized Chen’s faith or his political positions. It is telling that the article cannot quote a single misstatement. I’ve always accurately described Chen as an opponent of “forced abortion.”

In fact, I have never characterized Chen as lining up with me politically or religiously. I definitely wouldn’t try to get Chen to agree with me on hot-button social issues discussed by American politicians today. Chen hasn’t even advocated leaving the Communist party, so why would I ask that he align with Republicans or Democrats? He wants to reform China, not the United States.

The Times article brings these “hot-button” issues to the forefront as it highlights Fu and ChinaAid in Chen’s controversy over the end of his fellowship at New York University, noting Fu’s Evangelical Christian ties, accusing him of being “[a]mong those most eager to stake a claim on Mr. Chen’s celebrity.”

Chen, who the Times says is known for not wanting to be part of the Democratic or Republican landscape in the nation, isn’t a Christian, but Fu says they are aligned by a common goal, not religious drive.

Chen and I have differing political and religious views, but we are bound together by common experiences of persecution and by a common commitment to human freedom — my only purpose has been and will be to support Chen and his family’s fight for freedom and human rights. There is no conspiracy.

ChinaAid is a non-partisan, non-governmental, independent Christian human-rights organization. Fu says its “core mission is to advance religious freedom and rule of law in China. We believe these universally recognized values and rights in China should be a concern to all Americans — conservatives and liberals, Republicans and Democrats, and across the political and ideological spectrums.”

That, Fu notes, is the biggest problem with the story that mischaracterizes both him and Chen:

My experience with Chinese Communism taught me bitter lessons about the extent that ideological zealots will obscure and distort the truth to advance a partisan agenda.  I did not expect such distortion within the pages of America’s most historic newspaper.

In the battle for human rights, in which some of the most precious are for those who are tortured and killed before being allowed to be born, the United States should be truly a nation united. Fu’s article points out that the political issues within our nation and among our media outlets make it hard to unite in the human rights battle in either nation. We become mired by divisions set up by false rhetoric and mischaracterizations, and the latest from the New York Times only adds to the problems.