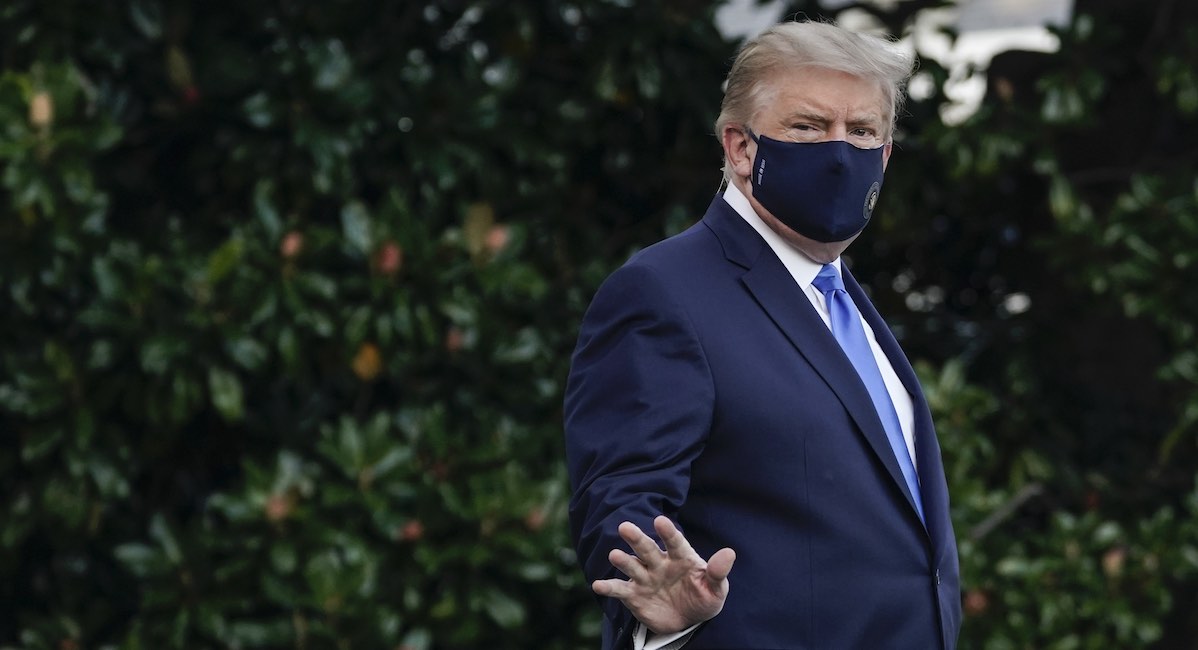 (Catholic News Service) The treatment that President Donald Trump has received to fight COVID-19 has turned the focus on an experimental drug that shows promise in combating the coronavirus but is raising ethical questions about the cell line that helped researchers develop the medicine.

At the center of attention is the “cocktail” of antibodies in the drug called REGN-COV2 manufactured by New York-based Regeneron Pharmaceuticals.

The drug is in the midst of clinical testing but exhibited enough promise that it was administered to the president.

Preliminary results show that if administered early in the course of the COVID-19 illness, it can help people fight the disease through the introduction of antibodies that mimic an immune system response, said Dr. Paul Carson, director of the Center for Immunization Research and Education at North Dakota State University and a member of the Catholic Medical Association.

Queries about the treatment Trump has received emerged soon after he reported feeling better two days following his admission to Walter Reed National Military Medical Center, where he was taken by helicopter from the White House Oct. 2.

It is unknown whether REGN-COV2 alone is the reason for his quick recovery or whether its use in combination with other drugs has apparently worked. Those other drugs include remdesivir and the steroid dexamethasone, which is commonly used to treat asthma, rheumatoid arthritis and certain cancers.

The questions surrounding the REGN-COV2 treatment arose from reports the drug was developed using a cell line from tissue taken in the 1970s from an aborted fetus. The cell line has lived in laboratories since then and has undergone a series of changes over the years.

In April, the chairmen of four U.S. Conference of Catholic Bishops’ committees and groups opposed to abortion sent a letter to Food and Drug Administration Commissioner Stephen Hahn expressing concern over the development of “dozens of vaccines … some of which are being produced using old cell lines that were created from the cells of aborted babies.”

The letter asked Hahn to “encourage and incentive pharmaceutical companies to use only ethical cell lines or processes for producing vaccines.”

Meanwhile, the Trump administration has moved to eliminate federally funded research that relies on fetal tissue from elective abortions. The Department of Health and Human Services in cooperation with the National Institutes of Health has implemented an ethics advisory board to screen proposals seeking federal dollars.

Established early this year, the Human Fetal Tissue Research Ethics Advisory Board voted July 31 to withhold funds from 13 of 14 research proposals that involved the use of fetal tissue.

The 15-member board exists “to advise, consult with and make recommendations to, the secretary of HHS, regarding the ethics of research involving human fetal tissue.”

Archbishop Joseph F. Naumann of Kansas City, Kansas, chairman of the U.S. bishops’ Committee on Pro-Life Activities, applauded the Trump administration “for moving NIH in a direction that shows a greater consideration for medical ethics in research and greater respect for innocent human life.”

REGN-COV2 is the result of painstaking research since the 1970s that began with a cell line known as HEK293 that is commonly believed to have been derived from an aborted fetus. HEK293 cells are widely used in medical research.

Over the years, researchers have transformed the cell line into what today is known as HEK293T, leading to the determination that it is no longer fetal tissue.

“We did not use human stem cells or human embryonic cells in the development of REGN-COV2,” Bowie added.

The company Oct. 7 applied to the FDA for emergency approval for the experimental drug.

Father Tadeusz Pacholczyk, director of education and ethicist at the National Catholic Bioethics Center, agreed with the company’s stance, saying in an email to CNS the drug is manufactured in hamster cells, “not cells derived from human abortions.”

His concern, however, arises from the use by researchers of a biological assessment tool on REGN-COV2 that relies on the HEK293 cell line that originally was derived from an abortion. The tool, developed years ago, allowed Regeneron to determine which antibodies that had been developed might be most effective against COVID-19, he said.

“It is unfortunate that these testing tools, which were developed by non-Regeneron researches, rely on fetal cell lines from abortions,” Father Pacholczyk said. “This fact serves to remind us how the abortion mindset has infiltrated all sectors of our society, including many sectors of pharmaceutical research and development. The church has long been protesting this fact, and encouraging the use of alternatives.”

Dominican Father Nicanor Austriaco, writing May 26 in Public Discourse, the journal of the Witherspoon Institute, recognized that HEK293 cells “are simply the best” for culturing many of the viruses that are commonly used in biotechnology.

The Witherspoon Institute describes itself as an independent research center focusing on enhancing public understanding of the moral foundations of free and democratic societies.

The priest, an associate professor of biology and theology at Providence College, acknowledged that the original fetal tissue from which the cell line was derived is “long gone.” He said that while “only distinct, new cells derived from the original fetal cells remain,” ethical questions persist surrounding the use of the HEK293 cell line for any COVID-19 medical treatment, including the development of a vaccine.

The article raised the question of a person benefiting from a past “evil act” — abortion — and whether such an “appropriation of evil is morally justifiable.”

READ: Fetal tissue is not necessary for medical innovation

Noting that some people may object to using treatments, including vaccines, that may be developed from the original HEK293 cell line even if it is ethically justifiable, Father Austriaco said that they have a right to refuse such medical options.

“However, society also has a right, and indeed, a moral obligation, to protect its citizens from illness and death. Therefore, justice demands that we balance these competing interests in our communities,” he said.

Those who do not become vaccinated because of their moral concerns should also expect to be prohibited from entering public spaces such as schools, restaurants, shopping centers and airports “where they may unwittingly catch or spread the disease,” he wrote.

While such questions remain, Carson, the North Dakota physician, expressed optimism about REGN-COV2 eventually becoming an option for treating COVID-19, but cautioned against moving too quickly on widespread use. He said he wanted to await the results of ongoing clinical trials before reaching a definitive conclusion.

“We have to see how well it works,” he said.

Carson explained that he is concerned that introducing antibodies into a person who has not yet contracted COVID-19 could lead some patients’ own immune systems not to develop natural antibodies to fend off the still widely circulating coronavirus should they be exposed again.

“Will it work in a real-world setting if people don’t show up (at a doctor’s office) immediately after they were infected?” he asked.

Carson said until REGN-COV2 is proven effective, “if I were advising the president, I would say don’t consider yourself immune. This may have prevented his immune system from making a good response.”

He also said he holds no ethical concerns about administering the drug if it is proven to be effective.

“There’s concerns around the original science,” Carson said. “But for the person who might be receiving this, the product they receive is no way produced from the use of fetal cells. This is so far removed from that portion of the unethical act that I think that it is permissible.”

Editor’s Note: This article was published at CatholicNews.com and is reprinted here with permission.