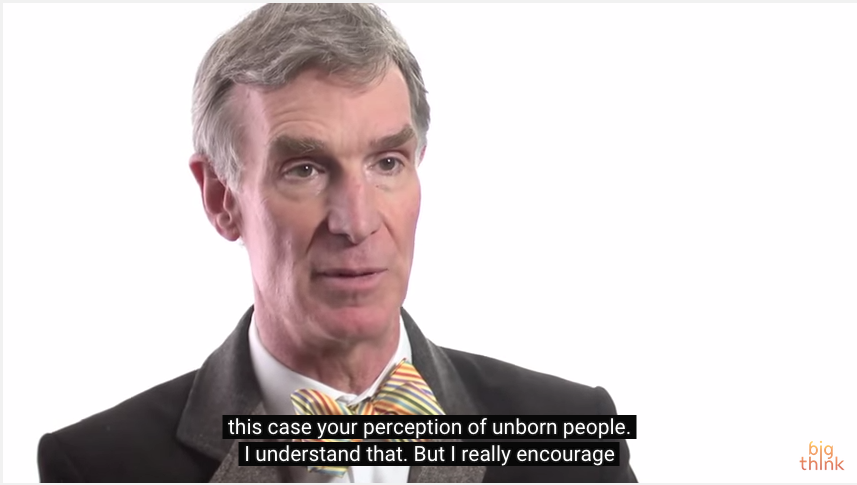 Back in January, Bill Nye the Science Guy broke many a pro-life millennial’s heart when he outed himself as a particularly unscientific pro-abort. Unfortunately, this week he came out with a new video at Big Think imploring, “Can we stop telling women what to do with their bodies”? And once again he’s so scandalously wrong on basic human biology that it’ll have you doubting everything you ever learned on his show:

Many, many, many, many more hundreds of eggs are fertilized than become humans. Eggs get fertilized and by that I mean sperm get accepted by ova a lot. But that’s not all you need. You have to attach to the uterine wall, the inside of a womb, a woman’s womb.

It may be what you need for a birth, but once that egg is fertilized, that human already exists. How can a Science Guy say otherwise with a straight face? Has Nye never read any relevant textbook on the subject that would explain so? Does he dispute the definition of an organism as “a living being,” an “individual constituted to carry on the activities of life by means of organs separate in function but mutually dependent,” or that a “human” is simply an organism belonging to the human species? Is he unfamiliar with the commonly accepted criteria for life of growth, reproduction, metabolism, and response to stimuli?

This would be a clever point if society was plagued with an epidemic of naturally-occurring deaths (for instance, of the sick or elderly) being prosecuted as homicides. But it turns out that somehow, we’re generally competent enough to figure out which is which.

During the period of our history when abortion was generally illegal after quickening, the authorities didn’t attempt to investigate or prosecute abortions they didn’t clearly know happened; they used common sense consistent with the scientific knowledge of the time.

Now that we know better, there’s no reason to believe that criminalizing abortion would have any different standards of probable cause than any other murders, just as the police don’t preemptively install security cameras in the homes of every family that has a grandparent living with them.

It’s just a reflection of a deep scientific lack of understanding and you literally or apparently literally don’t know what you’re talking about.

The most blatant case of projection we’ve seen all year? The competition is fierce, but it’s a strong contender.

And so when it comes to women’s right with respect to their reproduction, I think you should leave it to women. This is really – you cannot help but notice. I’m not the first guy to observe this, you have a lot of men of European descent passing these extraordinary laws based on ignorance.

I don’t know how anyone being of European descent is germane to the merits of anyone’s position on abortion, but I do know that Nye apparently not knowing that women lead the pro-life movement is more ignorant than anything he’s identified so far.

I know it was written or your interpretation of a book written 5,000 years ago, 50 centuries ago, makes you think that when a man and a woman have sexual intercourse they always have a baby.

It’s one thing for somebody to live such a politically sheltered life that he isn’t aware of groups like Secular Pro-Life, but does anyone think it’s plausible that Nye sincerely doesn’t know that millions of people’s motivation for opposing the violence of abortion is no more Bible-based than their opposition to war or child abuse or capital punishment?

I mean it’s hard not to get frustrated with this everybody.

Especially when your entire view of the subject is about as sophisticated and informed as a teenager who just found a stack of NARAL pamphlets.

And I know nobody likes abortion, okay.

Why? If opposition to it is based on a certain interpretation of a 5,000-year-old book, then what reason would non-Christians have for disliking abortion? What’s wrong with liking it? (To say nothing of the fact that anyone who really thinks “nobody likes abortion” clearly hasn’t heard of Katha Pollitt or her fans…)

But you can’t tell somebody what to do. I mean she has rights over this, especially if she doesn’t like the guy that got her pregnant. She doesn’t want anything to do with your genes, get over it, especially if she were raped and all this. So it’s very frustrating on the outside, on the other side.

Well, whether “she has rights over this” would depend in large part on what the “this” in question is, no? If Nye can’t get the factual basics of the premise right, he’s in no position to draw conclusions about it.

This is a complete non-sequitur, a man who bastardizes science to reflect his biases ranting about the imaginary know-nothingism of people who actually respect science more than he does (unless, of course, Nye has actually uncovered a secret pro-life plot against America’s microscopes, in which case Big Think kind of buried the lead).

So then to claim that you know the next step when you obviously don’t is trouble. Let me do that again. Let me just pull back. At some point we have to respect the facts.

Recommending or insisting on abstinence has been completely ineffective. Just being objective here.

As Live Action regulars know, there is a wealth of research that has shown precisely the opposite. Does the name Science Guy really still apply if you don’t study up on what you’re talking about?

Closing abortion clinics. Closing, not giving women access to birth control has not been an effective way to lead to healthier societies. I mean I think we all know that.

Sounds like Nye also didn’t bother to look up how many non-Planned Parenthood women’s health centers are out there, either, or the actual data on contraception’s relationship to abortion and birth rates. Inquiring minds also want to know if Nye’s definition of health includes the myriad ways Planned Parenthood mistreats women. And regardless of health, closing abortion clinics certainly leads to more just and humane societies.

But you don’t respect them enough to engage with their actual views or the true facts behind them.

But I really encourage you to look at the facts. And I know people are now critical of the expression fact based but what’s wrong with that? So I just really encourage you to not tell women what to do and not pursue these laws that really are in nobody’s best interest. Just really be objective about this. We have other problems to solve everybody. Come on. Come on. Let’s work together.

Nothing like a dash of utterly-unearned arrogance and condescension to top off this symphony of ignorance.

The most charitable interpretation of Bill Nye is that he has absolutely no idea what he’s talking about, but that didn’t stop NARAL or the Huffington Post from promoting him. It’s plausible Nye doesn’t know that prominent pro-abortion thinkers and leader such as Faye Wattleton, Ann Furedi, Naomi Wolf, David Boonin, Peter Singer, Judith Arcana, Kathleen McDonnell, Leslie Cannold, Penny Lane, Jennifer Baumgardner, Loretta Ross, and Mary Elizabeth Williams have all admitted they know better—but NARAL and HuffPo have no such plausible deniability.

They’re just thrilled to have someone with so many years as a trusted cultural icon spouting their lies, with so much goodwill built up that many simply can’t imagine the Science Guy leading them astray. Counterintuitive though it may seem, sometimes an unassuming children’s host in a bowtie can be deadlier than the most hardened pro-abortion professional.