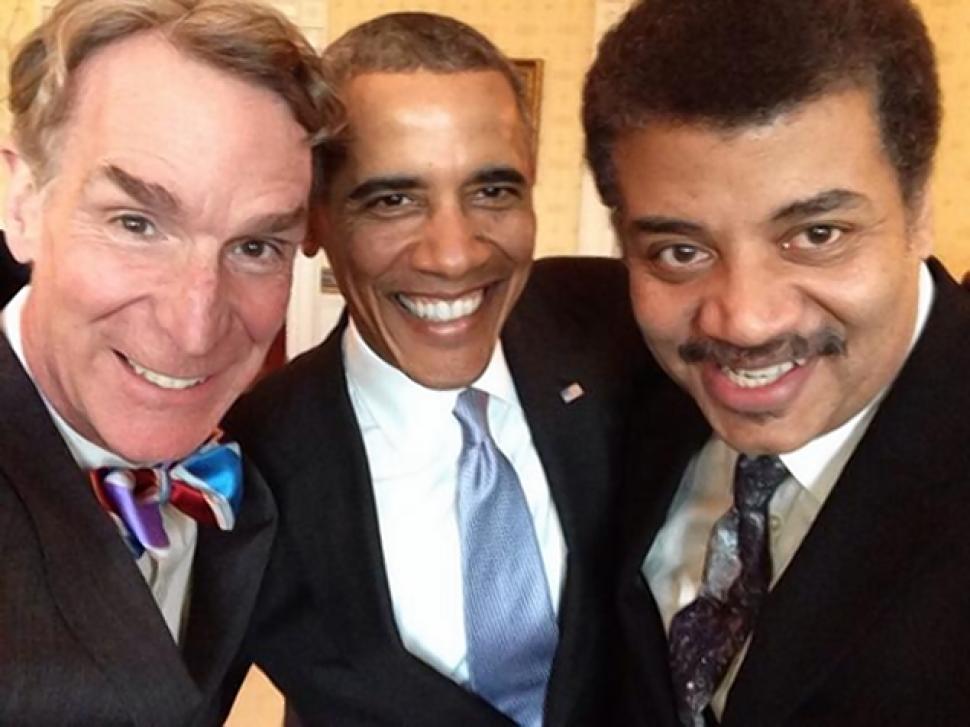 I knew there was a reason I liked Beakman’s World better.

Last year, I called out Bill Nye the Science Guy for omitting from his ostensible war on scientific illiteracy the single most egregious, most dangerous, and least debatable bit of junk science in the country: denial that the life of an individual human being begins at fertilization.

Young-earth creationists constitute a national crisis that could “deprive [students] of understanding of nature and our place in the cosmos,” yet a misconception directly tied to a million deaths a year isn’t even worth mentioning? Please.

Since then, Nye has written a book, Undeniable: Evolution and the Science of Creation, which is predominantly concerned with his titular pet issue. However, our friends at Secular Pro-Life have an excerpt  (with further quotes from Google Books) in which the Science Guy finally addresses the unborn…and, when given a chance to prove he really is an objective champion of science, sides with denialism instead.

There are people who object to messing around with human eggs and sperm in any way, based generally on their interpretations of The Bible.

Well, good to see we’ll be kicking things off with a massive straw man.

There is, for example, the strong belief that life begins at the moment a human egg accepts a human sperm and is thereby fertilized. But that’s not exactly what happens, or more accurately what has to happen. Once the egg has accepted a sperm and its Y-shaped or X-shaped chromosome, it has to attach itself to the wall of the female’s uterus. If it doesn’t do that, there will be no baby in the works.

You’d think a Science Guy would approach the question by examining the biological criteria for what’s alive, an organism, and a member of the human species. But after seeing Nye ignore all that in favor of a measly line about the thing he won’t define needing to implant (which doesn’t change what it is), one can’t help but wonder where else he cuts corners like this.

So, Bill, how do you account for the many, many biology textbooks — not political propaganda, not religious manifestos, but mainstream scientific educational materials — that teach that that is exactly what happens?

“This highly specialized, totipotent cell marked the beginning of each of us as a unique individual […] A zygote is the beginning of a new human being (i.e., an embryo).” — Keith L. Moore, The Developing Human: Clinically Oriented Embryology, 7th edition. Philadelphia, PA: Saunders, 2003. pp. 16, 2.

“In that fraction of a second when the chromosomes form pairs, the sex of the new child will be determined, hereditary characteristics received from each parent will be set, and a new life will have begun.” — Kaluger, G., and Kaluger, M., Human Development: The Span of Life, page 28-29, The C.V. Mosby Co., St. Louis, 1974.

“The term conception refers to the union of the male and female pronuclear elements of procreation from which a new living being develops. […] The zygote thus formed represents the beginning of a new life.” — J.P. Greenhill and E.A. Freidman. Biological Principles and Modern Practice of Obstetrics. Philadelphia: W.B. Saunders Publishers. 1974 Pages 17 and 23.

“[All] organisms, however large and complex they might be as full grown, begin life as a single cell. This is true for the human being, for instance, who begins life as a fertilized ovum.” — Dr. Morris Krieger “The Human Reproductive System” p 88 (1969) Sterling Pub. Co.

Or the scores of abortionists who admit it?

“No one, neither the patient receiving an abortion, nor the person doing the abortion, is ever, at anytime, unaware that they are ending a life.” — abortionist William Harrison

“Well, when the woman comes in, the fetus is alive. But the doctors that we represent will affect fetal demise in utero. So that means the baby is effectively, you know, dead in the uterus and then the procedure starts.” — National Abortion Federation head Ron Fitzsimmons

Or all the feminist leaders and pro-choice philosophers who not only admit it, but chastise their own allies denying the obvious?

“Perhaps the most straightforward relation between you and me on the one hand and every human fetus from conception onward on the other is this: all are living members of the same species, Homo sapiens.” — UC Boulder philosophy professor David Boonin

“It was when I was four months pregnant, sick as a dog, and in the middle of an argument, that I realized I could no longer tolerate the fetus-is-nothing paradigm of the pro-choice movement.” — feminist Naomi Wolf

“We can accept that the embryo is a living thing in the fact that it has a beating heart, that it has its own genetic system within it. It’s clearly human in the sense that it’s not a gerbil, and we can recognize that it is human life.” — British Pregnancy Advisory Service chief executive Ann Furedi

But remember: he’s very, very concerned about your ability to understand science and accept evidence. Really.

I mention this because our lawmakers spend a great deal of time in town hall meetings and on our legislative debate floors considering laws based on the idea that fertilized eggs are the same as people.

If Nye had put more effort into educating himself on embryology, he would know that “fertilized egg” is a misnomer because what results from fertilizing an egg is no longer an egg or a sperm cell, but a new single-celled entity, and that this entity is not merely a cell, but a distinct and whole organism. As to whether these single-celled human beings “are the same as people,” he fails to account for the fact that linguistically, “person” and “human being” are synonyms, or that the concept of non-person humans is a philosophical claim beyond science’s scope, rife with its own starting assumptions and subjective value judgments.

I hope it gives some of us pause for thought to realize that fertilized eggs pass right though women into the environment all the time. Put bluntly, un-gastrulated fertilized eggs become sewage. Are the women who produced these cells to be prosecuted for violating some church-driven law?

This idea that the natural frequency of death among a given group somehow means they were never alive or justifies killing them is self-evident nonsense, and a damning indictment of the sloppy thinking governing a supposed paragon of reason. Or, it would be if Nye didn’t know better — SPL notes that elsewhere in the book, he “admirably explored in depth the fact that every human being ever to exist either has died or is going to die.” But hey, padding out pseudo-analytical diatribes with mindless T-shirt slogans is part of the scientific method, right?

Also absurd is the fear-mongering suggestion that not only would miscarriages suddenly become subject to a “church-driven” inquisition under pro-life laws, but so would naturally expelled, un-implanted zygotes. Protect unborn babies, and law enforcement nationwide will somehow become fanatical morons unable to exercise the most rudimentary discretion and common sense! But considering that the elderly die of natural causes all the time, yet we don’t have an epidemic of overzealous prosecutors targeting the relatives they lived with, I think we’ll be okay.

Without the basic research, this odd debate and these extraordinary laws that are intended to legislate or control what goes on in a woman’s womb would not be possible. We have debates that are based on centuries-old scientific discoveries. Perhaps a more informed approach would obviate the need for the debates in the first place.

Yes, “what goes on in a woman’s womb” is what’s in dispute, rather than “killing human beings.” Swapping out precise descriptions of controversial practices for emotionally loaded generalizations isn’t very scientific, Bill. Nor is sneering about your opponents’ ignorance right after ignoring virtually all of the relevant facts yourself.

When it comes to the deliberate use of human eggs, they are harvested or extracted all the time, and discarded all the time; that, too, is a part of in vitro fertilization. There are many deeply religious people who object to this. For me, their reasons are arbitrary. An extraordinary number of human eggs go unfertilized—countless unproductive eggs are shed by single women on earth today, and everyone who has ever lived.

Huh? Many of us (not all of whom are religious, despite the Science Guy’s stereotype) object to IVF because it creates excess embryos — human beings — only to be discarded and killed, but since when does anyone object to the destruction of unfertilized eggs? I’ve never heard it.

I am just reminding us that unfertilized eggs, unproductive seeds, and unmet potential are part of the bigger picture of reproduction and, for better or for worse, are the way of the world. This fundamental insight that living things produce a surfeit of eggs and sperm, more than can survive, goes back to Darwin’s work on competing populations and figures prominently in any understanding of biology and evolution. For me, this makes every baby that much more precious—after the egg successfully develops and a baby is born, not before the egg even attaches to its mom.

Nye seems to be saying that born babies are precious because they’ve survived the gauntlet of natural selection. He’d do well to reflect on the likelihood that this romanticization of Darwinism — elevating evolution from a mere explanation of natural phenomena to almost a belief system in its own right — turns at least as many people against evolution as does misplaced fear of its theological implications. Turning the mechanics of nature into moral guidebooks tends not to end well.

My point of view differs from many other people’s, because it’s based on the facts of life rather than some suppositions of life.

*sigh* Why is it always that the most arrogant have the least to be arrogant about?

With so many falsehoods, omissions, and flat-out nonsense in support of killing fetuses for reluctant mothers and butchering embryos for stem cells (he draws the line at cloning), it turns out that Bill Nye’s professed devotion to science is no more rigorous than the “anti-science” politicians he rails against. He is every bit as prone to choosing his politics over the evidence. That’s a shame for those of us who grew up on his show and still have his theme song bouncing around in our heads. For today’s students trusting his latest lessons to help understand the world, it’s a disgrace.