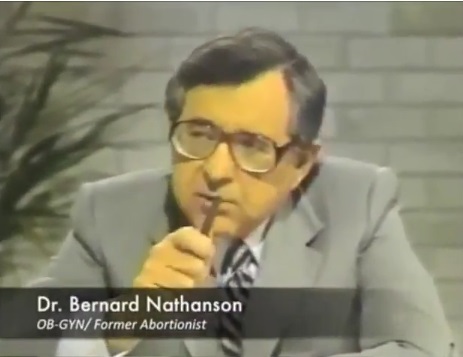 Bernard Nathanson was once a prolific abortionist. The New York OB/GYN was a co-founder of NARAL — an acronym for National Association for the Repeal of Abortion Laws — now simply called NARAL Pro-Choice America. NARAL was launched in the late 1960s, prior to Roe v. Wade‘s passage. Nathanson was the organization’s medical adviser. But prior to his death in 2011 at the age of 84, he worked hard to reverse the damage he did as an abortionist and leader in a movement he denounced after undergoing a dramatic pro-life and Catholic conversion. He details his history and conversion in his powerful memoir, “The Hand of God.” In his memoir, he bares all, telling the behind-the-scenes reality of the abortion industry, presenting a picture of the way men tried to push abortion on the women’s rights movement.

“Personally responsible for over 75,000 abortions”

Nathanson said, “I am personally responsible for over 75,000 abortions.” “This was the greatest mistake of my life,” he continued, “and legal abortion was the greatest mistake this nation ever conceived.” But prior to his pro-life conversion, Nathanson not only presided over abortions, but he also worked to ensure the prominence of an abortion culture in the nation. He was determined to convey the false idea that abortion could solve a woman’s problems.

In his memoir, Nathanson writes, “… we would settle for nothing less than striking down all existing abortion statutes and introducing abortion on demand in their place. Our first target of opportunity was the New York state statute prohibiting abortion unless the pregnancy threatened the life of the pregnant woman.” Nathanson’s memoir is filled with confessions that show the underhanded deception of the abortion industry, despite its claims to care about women.

I know every facet of abortion…. I helped nurture the creature in its infancy by feeding it great draughts of blood and money; I guided it through its adolescence as it grew fecklessly out of control.… Abortion is now a monster so unimaginably gargantuan that to even think of stuffing it back into its cage (having fattened it on the bodies of 30 million humans) is ludicrous beyond words. Yet this is our charge — a herculean endeavor.

… The abortion mentality, for lack of a better word, has steadily metastasized throughout our society so subtly and so aggressively but even if it were miraculously recriminalized it is extremely doubtful if such allied plagues as child abuse, pornography, violence against women, and genocide… would magically vanish.

His allusion to abortion as a cancer metastasizing is an appropriate one, for as cancer is an evil that takes too many lives too soon, so is abortion; however, abortion is man’s created cancer, and Nathanson was one of the engineers of this. He makes his involvement clear, even as he laments every moment of it.

Nathanson discusses the various evils he has witnessed and in which he has partaken, and exposes the underworld of the industry. He notes an example that may seem unbelievable to us, discussing a New York City abortionist who tested, unknowingly, a male urine sample in “what laughingly passed for his laboratory and reported to her after a decent interval, perhaps three minutes, that she was indeed pregnant and he would be happy to do the abortion.”

Although that abortionist lost his medical license in 1976, Nathanson’s account of stories such as these exposes the corruption of the abortion industry. More recently, Kermit Gosnell and Douglas Karpen have both shown themselves to be running unsanitary and dangerous abortion operations in their own individual “houses of horror.” Nathanson was simply one of the forerunners of this movement; he later saw the light, became pro-life, and used his later years to show it to others.

It is Bernard Nathanson who was an early exposer of the problems with ‘pro-life’ abortion exceptions. In addition to the fact that abortion always takes a preborn human life who is not at fault for any crime, exceptions, he explains, also come with loopholes. Nathanson writes about how “a few cracks had begun to appear in what heretofore appeared to me a monolithic opposition to abortion on demand,” adding:

In the mid-1960 the model American Law Institute (ALI) statute on abortion was published, and provided for abortion in the case of pregnancy by incest, rape, fetal deformity (unspecified as to how serious), or medical conditions accompanying the pregnancy that reasonable physicians would certify would threaten the woman’s life or health.

He explains that this ALI exception doctrine systematically began to be adopted by other states, as well, opening the path to even more unfettered abortion.

Further, he exposes not only the laws of the United States, but the international laws that help further the culture of death and pave the way for the United States to do more harm, rather than uphold the historical Hippocratic Oath to “do no harm.” Nathanson writes:

In 1968, Great Britain weighed in with a permissive abortion statute. I began referring pregnant women there since there was virtually no limit to the gestational age at which the British physicians would  terminate a pregnancy. I myself paid a visit to London 20 years ago and watched an acquaintance… dispose of 32 pregnancies (all over 18 weeks) between nine in the morning and two in the afternoon. At approximately noon he had the nurse push up his mask and feed him a glass of orange juice….

Disturbingly, Nathanson warned people of the fetal parts industry back in the 1990s when his book was first released. Had his warnings been taken seriously, perhaps Planned Parenthood and its partners in fetal tissue trading could have been stopped decades ago. Nathanson reveals that the profit margin of abortion is what drives the industry, far more than the purported need to empower women. Instead, it preys on women by turning their “choice” into dollar signs.

In his memoir, from chapter 13 to the end of the book, readers are led on a heart-racing horror story of the fetal parts industry, later exposed in 2000 by Life Dynamics and exposed again by the Center for Medical Progress (CMP) in 2015. Nathanson writes of receiving a letter that says, in part: “I overheard them discussing this last week and they are even charging more for brain tissue than arms and legs and other parts” (Nathanson, 163, Location 200).

Nathanson speculated in the 1990s what would have to happen for a fetal parts industry to thrive, and composes a troubling description of the process:

The abortions must then be performed (five for each patient awaiting the transplant), and of course the abortion doctors and clinic and hospital personnel are compensated for their services. The tissue must then be immediately iced by a technician standing right at the abortion table (also paid), and then the tissue must be transported to a suitable laboratory where another technician will examine all the fetal tissue under microscope and winnow out the fetal neurons (nerve cells) appropriate for transplant (that technician is especially well paid since this is critical tedious work).

Then Nathanson writes, “it is preposterous to believe that a ban on ‘commercialization’ of fetal tissue would (a) remove the profit motive from this technology; (b) reduce the demand for the technology; and (c) at a stroke, sanitize the technology ethically—if the tissue cannot be bought or sold, then clearly it is an ethically acceptable procedure.”

Bernard Nathanson saw the future clearly, commenting on where the line might end up — “fetal skin to the burned” — which might lead readers to reflect on the Neocutis products of skin cream, made from fetal cells, to help burn victims and others. This isn’t science fiction. It’s post-Roe v. Wade society, about which Nathanson tried to warn America 22 years ago. Despite his warnings, two decades later, many are still watching CMP‘s undercover footage of babies being dissected in pie pans, exposing the dark side of that “empowering choice.”

“Deny what we knew to be true: that an abortion kills an existing human being”

Indeed, Nathanson bluntly proclaimed how he helped to deceive the American public, saying:

One of our strategies… was to deny what we knew to be true: that an abortion kills an existing human being. We denied that fact in an effort to mislead the American public and the courts of this land.

Astoundingly, while women were crying for liberation and heralding feminism, they were being deceived by a group of men trying to use them for their own financial profit. Trying to convince women abortion would solve their problems and help them be successful, Bernard Nathanson and his co-laborers instead controlled women, taking their money and manipulating them into thinking that liberation looked like murdering their children.

Nathanson’s pro-life conversion happened in phases, as the abortionist began to see the baby on new technology, such as ultrasound and fetoscopy. The visuals he would see, even as he killed preborn babies, began to convince him of the reality of abortion. Yet for a time he continued killing those babies, reasoning that abortion was still a better alternative. Eventually however, even the man who helped kill 75,000 preborn babies, personally responsible for 60,000 of those, changed his mind and his heart, converting both to Christianity and to an evangelism of pro-life truth.

Before technology had advanced to today’s common 3D and even 4D ultrasounds, Nathanson made a pro-life video that exposed abortion. Called “The Silent Scream,” it shows the real-time abortion of a baby girl in the first trimester. After watching the video of his own procedure, the abortionist who performed it was so horrified that he quit, never to do another abortion again:

The clip begins with an ultrasound of the fetus (girl) who is about to be aborted. The girl is moving in the womb; displays a heartbeat of 140 per minute; and is at times sucking her thumb. As the abortionist’s suction tip begins to invade the womb, the child rears and moves violently in an attempt to avoid the instrument. Her mouth is visibly open in a “silent scream.” The child’s heart rate speeds up dramatically (to 200 beats per minute) as she senses aggression. She moves violently away in a pathetic attempt to escape the instrument. The abortionist’s suction tip begins to rip the baby’s limbs from its body, ultimately leaving only her head in the uterus (too large to be pulled from the uterus in one piece). The abortionist attempts to crush her head with his forceps, allowing it to be removed. In an effort to “dehumanize” the procedure, the abortionist and anesthesiologist refer to the baby’s head as “number 1.” The abortionist crushes “number 1” with the forceps and removes it from the uterus.

Source for quotes by Bernard Nathanson:

Nathanson, Bernard. Hand of God: A Journey from Death to Life by The Abortion Doctor Who Changed His Mind. Regnery Publishing, 2013. Kindle file.