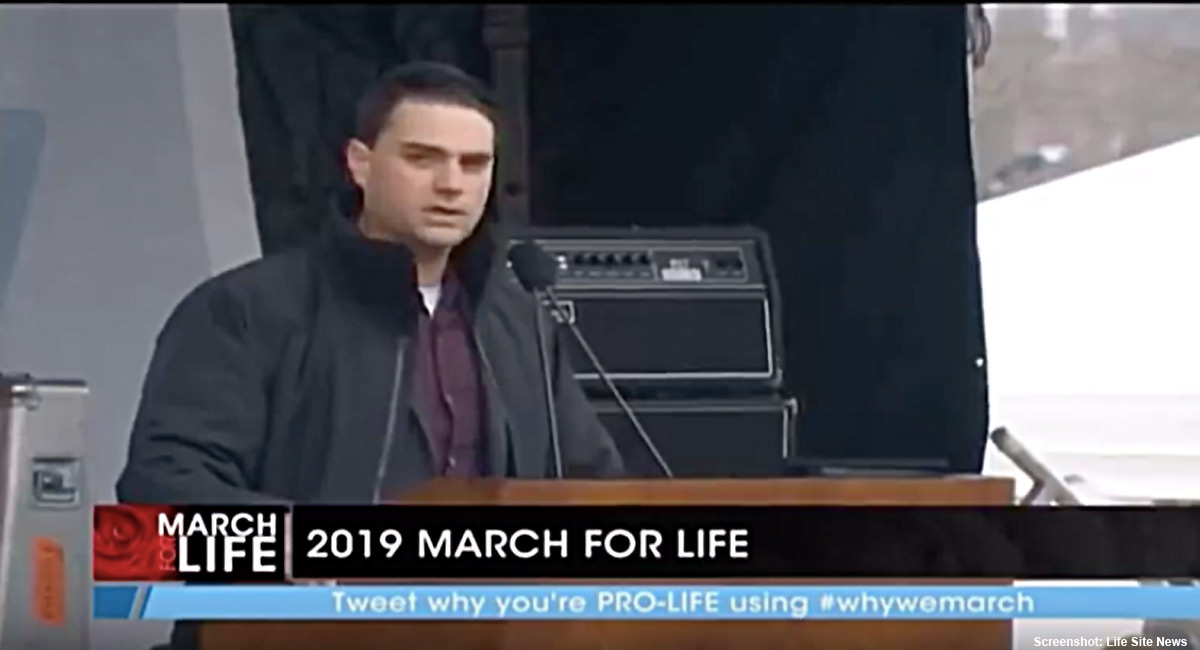 At the 2019 March for Life on Friday, conservative author, speaker, and attorney Ben Shapiro reminded pro-lifers that what’s right is not always popular and what’s popular is not always right. As he took on U.S. and Canadian political leaders’ criticisms of pro-lifers, Shapiro aimed to motivate pro-lifers to keep going against adversity.

“So perhaps we are out of line with the rest of society – to which I say good,” he said. “So were the abolitionists. So were the civil rights marchers. So were the martyrs in Rome and the Jews in Eygpt. Righteousness doesn’t have to be popular. It just has to be righteous.”

Shapiro’s comments are in reference to Canadian Prime Minister Justin Trudeau’s remarks that pro-lifers are “not in line with where we are as a government and quite frankly as a society.” Shapiro also pointed to New York’s Governor Andrew Cuomo as an example of someone who has “excised those who stood for life.” In 2014, Cuomo said during a radio interview that pro-lifers “have no place in the state of New York.”

These examples of prejudice from government leaders show how frightening it can be to proclaim one’s pro-life position. It opens a person up to criticism and even discrimination. Shapiro points out that pro-choicers have reversed good and evil when it comes to abortion, and preborn children and pro-lifers bear the brunt of that confusion. Abortion is based on lies, he said, and pro-choicers have blinded themselves to the truth. It’s up to pro-lifers to expose the truth despite the tribulations that may arise.

Shapiro reminded the crowd at the March for Life that “America was founded on the promise of God-given rights, chief among them the rights to life and liberty.” Some people, however, were “unjustly omitted” from receiving those rights. As America grew, hard-fought battles were won for people to receive their God-given rights, but one group was left behind, he explained.

“That group had once been the most prized possession of a great and moral people,” said Shapiro. “Its children. The souls entrusted to us by the Creator – given to us with care and love. We built this country for our children. We built our lives for our children. And then something happened. We, as a country, decided to erase them.”

This is why pro-lifers march, said Shapiro. Not for any attention or recognition, because major media outlets will continue to ignore the tens of thousands who march in favor of life and speak out against abortion. Pro-lifers march for the children who have been aborted and to hopefully save the lives of children at risk of abortion.

“Our children, slaughtered over the decades, remember. They look at us from above and they know that they meant something,” said Shapiro. “That they do mean something so long as we keep them in our minds and in our hearts.”

As the “guardians” of God’s precious children, Shapiro believes the children of pro-lifers will take up that job as they grow into adults and that all pro-lifers will “stand between America and the darkness, and we will march until that darkness is banished forever, and all of our children can stand together in the sunlight.”

Shapiro delivered a one-hour long podcast earlier in the day from the March for Life stage during which he addressed pro-choice arguments, interviewed Vice President Mike Pence, and said that the pro-life movement will prevail.