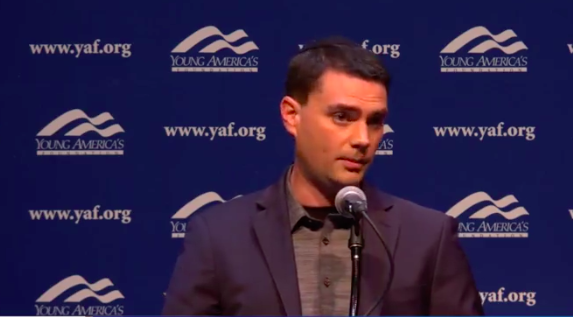 Yesterday, conservative commentator Ben Shapiro spoke at the University of California Berkeley, with protesters and security gathered outside. Inside, an interesting interaction occurred between Shapiro and a pro-abortion student during the event’s Q&A, in which the student asked, “Why, exactly, do you think a first-trimester fetus has moral value?”

A first-trimester fetus has moral value because whether you consider it a potential human life or a full-on human life, it has more value than just a cluster of cells. If left to its natural processes, it will grow into a baby. So the real question is, where do you draw the line? So, you’re going to draw the line at the heartbeat – because it’s very hard to draw the line at the heartbeat? There are people who are adults who are alive because of a pacemaker, they need some sort of outside force generating their heartbeat. Are you going to do it based on brain function? Okay, well, what about people who are in a coma? Should we just kill them?”

The student then stated his belief that sentience is what determines a human being’s moral value. According to LifeSite News:

When Shapiro asked the student if adult life has “intrinsic value,” the student replied that “sentience” is what gives life moral value, not the fact of “being human alone.”…

“So when you’re asleep, can I stab you?” Shapiro asked.

“OK, if you are in a coma from which you may awake, can I stab you?” Shapiro retorted.

The student said “no,” adding that a person in a coma still has “potential sentience.”

In the past, Shapiro has taken on others with similar questions about the humanity of preborn human life and the morality of abortion, even in cases of rape, stating that “the morality of abortion does not change based on need.… The abortion argument really comes down to, ‘do you think this is a life or not?’ If you don’t think it’s a life, then you can do whatever you want with it. If you do think it’s a life, then you can’t do anything with it.”

Shapiro has also emphasized the fact that abortion is often seen as a tidy, clinical procedure in which no violence occurs, which is far from the truth. Taking on arguments in favor of late-term abortion, he stated, “I want you to draw me what you think an abortion looks like. It’s not waving a magic wand, and it’s not getting rid of a cluster of cells that mean nothing. I want you to sit there and draw what it looks like when a baby is cut into pieces and removed from the womb. I would like to see that.”

Dr. Anthony Levatino, who committed over 1200 abortions before quitting, shows what a D&E abortion is in the video below. In a D&E abortion — the most common second-trimester abortion procedure in the U.S. — a baby is literally cut apart, limb from limb, usually while still alive, and removed from her mother’s womb in pieces after she has bled to death: