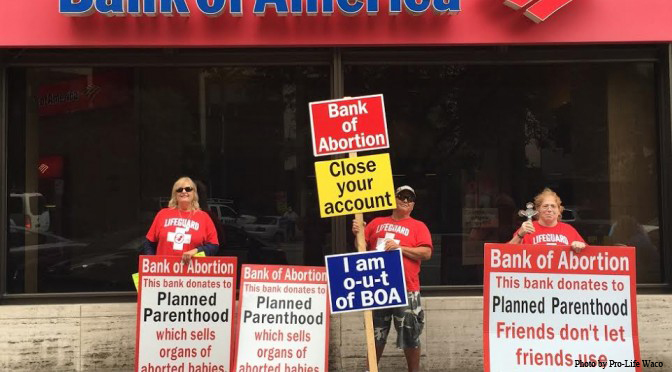 The group says Bank of America supports Planned Parenthood through a 100% match for all employee donations. In addition to performing hundreds of thousands of abortions annually, Planned Parenthood was caught selling baby body parts and admitting to illegally altering abortion procedures in undercover videos released by the Center for Medical Progress this past summer.

Pro-life Waco director John Pisciotta told Live Action News that members of Pro-life Waco began their outreach campaign by protesting the Waco branch of Bank of America (or “Bank of Abortion,” as they call it). Carrying large signs, the group explains to BOA customers what Planned Parenthood does and they ask customers to close their accounts. Now, Pisciotta is asking pro-lifers across the nation to take the truth of what Planned Parenthood does to their local Bank of America branch every week.

“A large number of protesters are not necessary for a big impact,” notes Pisciotta. “Even one person at a downtown branch can have a big impact.”

Pro-Life Waco has a record of successfully targeting those who collaborate with Planned Parenthood. Past efforts include the use of public pressure to expose the connection between Planned Parenthood and the Girl Scouts as well as Susan G. Komen. According to Pisciotta, national efforts to protest Bank of America are currently underway in two Texas cities – Dallas and Austin – as well as in Charlotte, North Carolina, where Bank of America’s national headquarters is located.

Pisciotta said that recently, a person came out of the bank with thumbs up, saying, “I’ve just closed my account.”

“We have some Austin ‘regulars’ who stop by each week to cheer us on and bless us,” he said.

But Pisciotta said he also gets some criticism. He recently received a letter from a local resident claiming to be a Christian who is “appalled” they are at the bank. The woman, identified as Paula, said the group is grandstanding and called the pro-lifers “sidewalk bullies.” Pisciotta denies the claim, but points out that Paula is obviously an abortion supporter. She told Pisciotta that thousands are donating to Planned Parenthood because of his protests – a claim she could not possibly prove. Paula then referred to Pisciotta’s group as “the worst of the forced birthers,” ending the letter by demanding they “take [their] lying for the Lord back to the epicenter of Baptist crazy in Texas, and LEAVE IT THERE!” (emphasis was Paula’s).

Now, Protest ABQ from Albuquerque, New Mexico, has announced that they have joined the protest. The group released the following statement:

ProtestABQ is committed to unifying our protest efforts locally and nationally in opposition of the abortion cartel in America. We protest individuals and corporations that perpetuate, condone, and/or support the abortion industry which is killing the most defenseless individuals…children in the womb.

BOA is going to feel some pain for financially supporting a so-called healthcare organization named Planned Parenthood. We hope this will lead to a national challenge to Bank of America for its entanglement with Planned Parenthood.

More information about the #ProtestBOA protests can be found here.