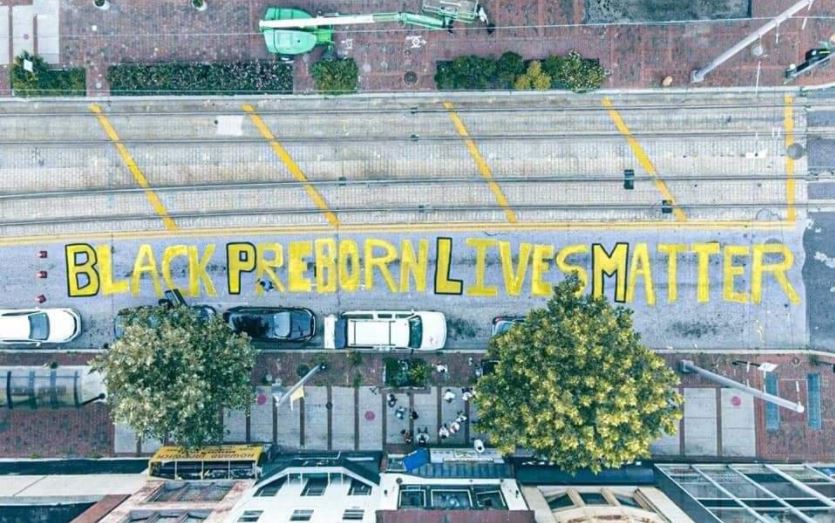 Pro-life activists painted the words “Black Preborn Lives Matter” on the street in front of Planned Parenthood in Baltimore, Maryland, last week. While the police arrested two activists for doing the same in Washington, D.C., last month, Baltimore police said the message could stay. But the next day, it was removed by the city.

Through the joint efforts of Students for Life of America (SFLA), The Frederick Douglass Foundation, and Human Coalition Action, the painting aimed to shine a light on the fact that the Black community accounts for just 13 percent of the population but nearly 38 percent of the abortion rate, according to David Cordaro, Marketing Director for SFLA. Fifteen activists began painting the words at 5:00 a.m. on Saturday, August 30, and were finished by 5:30. The paint was not permanent, and could be washed off by rain.

"City failed to issue permit for this but sent the chronically understaffed DPW to wash this away when trash is on every corner. Meanwhile, Black Trans Lives Matters remains intact and safe from city hoses." #Hypocrisy #priorities #doblacklivesmatter pic.twitter.com/VUCf8lviSp

Police officers arrived on the scene at 6:00 a.m. and chose not to issue citations because the pro-life activists were not impeding traffic and the paint was removable, which meant no property was destroyed. Since Baltimore has allowed similar actions by other groups in recent months, police saw no reason to prevent the pro-lifers from sharing their message.

Baltimore Police Sgt. Vincenzo Julio stated that the pro-life message would “remain here unless the city wants to come take it out, and that would be outside the police department.” Unfortunately, that is exactly what happened, when Baltimore’s Department of Public Works pressure washed the pro-life message off the street the following day.

Christopher Anderson, a nominee for Baltimore City Council District 7, participated in the pro-life event and said that while SFLA’s message was washed off by the city, similar messages by other groups have been allowed to stay.

In contrast, when SFLA tried to leave a pro-life message in front of Planned Parenthood in Washington, D.C., officers there chose to arrest two pro-life individuals who used chalk, not paint, to write the pro-life messages, charging them with defacing property.