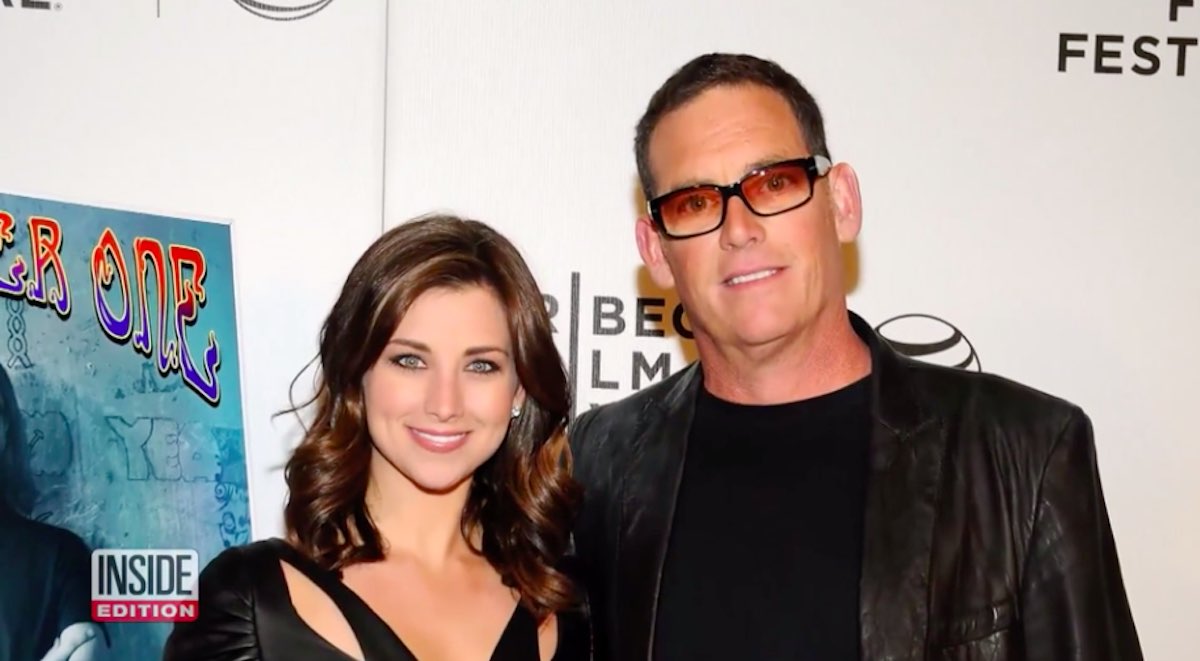 Homicide is a leading cause of death in pregnant women, and coerced abortions are far from rare. It’s also not unusual for women who resist coerced abortions to end up as victims of violence. One woman who claims she’s recently been subject to such violence and coercion is the wife of Mike Fleiss, creator of the ABC reality television show “The Bachelor” and its spin-offs. Fleiss is facing allegations that he told his wife, who is 10 weeks pregnant, to have an abortion. When she refused, he allegedly attacked her.

The Blast reports that Laura Fleiss (formerly Laura Kaeppler, Miss America 2012) filed for an emergency domestic violence restraining order, claiming that he assaulted her on July 4th. “While we were at our house in Kauai, Mike demanded that I get an abortion,” she claimed in the restraining order. “Our son Ben was in the house, seated in another room nearby. Mike told me, ‘If you have an abortion, then we can just go back to the way we were.'”

She further claimed that Fleiss had frequently been verbally abusive, but that her second pregnancy sent him over the edge. “While Mike has frequently been verbally abusive towards me during our marriage, in recent weeks, he has become enraged, due to the fact I am pregnant with our second child,” she said. “Mike told me many times that he did not want us to have a second child. He also repeatedly told me throughout our marriage, and prior to our marriage, that he knew he would ‘have to have’ one child with me because I was 26 years old when we got married, did not yet have any children, and he knew I wanted to have a family. Mike, however, being 55 years old, did not want to have more than one child together.”

While video of the alleged attack is not available, it was reportedly captured on the couple’s surveillance system, and photos have been released.

This is who’s producing a show about love. Home surveillance camera captures ‘The Bachelor’ creator Mike Fleiss attacking his pregnant wife on July 6th. She has obtained an emergency restraining order against him, he has filed for divorce. pic.twitter.com/S7F0jZ7f6I

Laura further claimed that Fleiss “continued to threaten me, demanding to see bank statements showing I paid for an abortion and the flight information to and from Oahu for the medical procedure.” More details from the restraining order shed light on her claims of abuse and violence:

I tried to go into another room to call my mother. Mike refused to let me go and made threats that I would lose access to my family and my family’s ability to see Ben.

Mike said, ‘You aren’t going to see your mother for the next two-to-three years. You need to call [your mom] right now and tell her this.’ I was terrified. Then he forced me to call my mother from my cell phone while he was standing and watching me in the room. When I called my mother, Mike then grabbed the phone and began angrily lecturing my mother. He told her I was getting an abortion. Then he said to her, ‘You won’t be seeing [Laura] until after August 5 — after the abortion.’

This statement was especially scary to me, as I had not personally committed to having an abortion but had made an appointment given Mike’s insistence and pressure. I had no idea what exactly he meant by it and interpreted it as a threat that he would prevent my family from having contact with me or my son.

Laura added that when she “got up to leave the room and picked up my cell phone, Mike, who is 6’4″ and weighs approximately 220 pounds, forcibly grabbed my phone out of my hands.”

When she followed him to try to get the phone back, she claims he “yelled that he was going to ‘shove me down the stairs.'” After then following him out of the house, she said that he “grabbed my body, forcibly pinned me up against the wall and held me there. After I broke free, he continued to use his arms and hands to aggressively push me away from him as he walked outside the door, still not returning my phone. Then he walked towards his pick-up truck parked outside in our driveway, shouting, ‘I’m going to punch your face in.'” 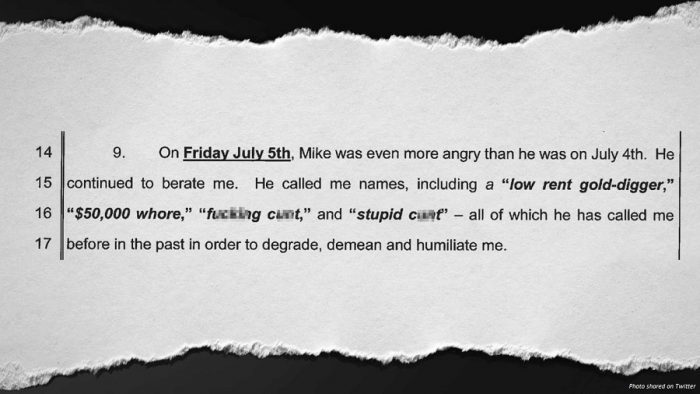 After following him to the car, Laura claims he opened the door and she remained “right behind him, pleading with him not to leave me and Ben at the house without access to my phone.” As she remained standing between the door and Fleiss, she claims that “Mike put the truck in reverse and began to back up, and firmly said, ‘You’re f–ked.’ He then stopped the car suddenly, which nearly made me fall off the running board and caused the swinging door to almost close on me. At this point, Mike forcefully shoved me off of the running board, closed the car door and drove away with my cell phone in his possession.”

Laura said she was traumatized afterwards, and in fear for her child’s life. “Our unborn child and I could have been severely injured if I had fallen off the truck’s running board or run over the wheels of the truck. I began to scream for help,” she said in the order. She also claims he made other threats against her, such as:

The restraining order was granted, and she is also requesting full custody of their son and their dog. For his part, Fleiss denies the allegations made against him, saying that she was emotionally unstable and lied to him about being on birth control. He claims that Laura attacked him, not the other way around.

As previously reported by Live Action News, threats of “a loss of support and resources, and potentially even homelessness” (as seen in the alleged threats above) are a common form of abortion coercion. In addition:

… pregnant women can also face extreme violence if they refuse to go through with the abortion. And yet these stories, these issues, are never brought into the debate on “choice.”

Not only is coercion never mentioned by abortion advocates, the abortion industry pretends it doesn’t exist, when they’re not the ones doing the pressuring or coercing.

If you are being pressured into an abortion, there is help available. Click here for resources and ways you can get help.