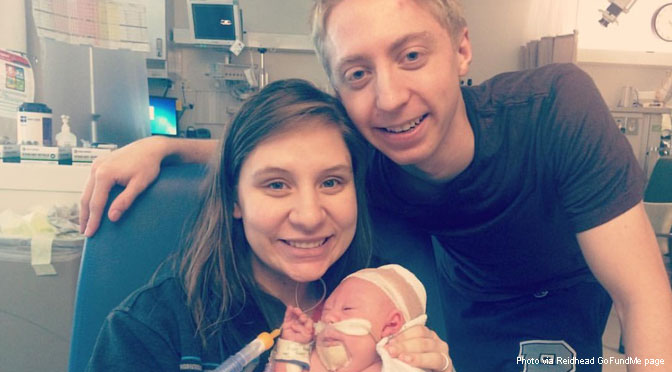 Alyssa Reidhead and her husband Ben we’re thrilled when they found out they were pregnant. For the young couple from Idaho, having their first baby was the happiest time of their lives. When their preborn baby was 23 weeks old the Reidhead’s went to the doctor for a routine appointment. They assumed they’d learn the sex of their baby but the additional news they received was shocking.

Ben told Fox News, “We were going in for one of the happiest times of our lives and come out walking like we just heard the worst news we could’ve ever heard.”

The doctor informed the Reidhead’s that their baby boy had a rare condition called Encephalocele. They were told the condition would cause their son’s brain to grow outside of his skull. According a close family member, the couple made multiple trips from Idaho to Salt Lake City, UT to see specialists at the University of Utah hospital and Primary Children’s hospital. In all of their visits they were told their baby wouldn’t likely make it to 30 weeks and if he did live it would be for mere minutes after birth.

Weighed down by the disheartening news, Alyssa and Ben began planning a funeral. Alyssa reported, “We picked out a casket and we picked out what we were going to do.”

The joyful anticipation of awaiting the arrival of their child turned to a time of dread. The Reidheads were scared of their son’s birth because they knew it could lead to his death.

Alyssa begin sharing the sadness through an online blog, which is now private. In spite of the challenges, Alyssa and Ben carried on with their pregnancy.

They delivered their baby boy by C-section last week at Primary Children’s Hospital in Salt Lake City. To the couple’s great joy, their little boy came out alert and crying.

Alyssa said, “He’s not hooked up to anything. He’s breathing fine. He’s lifting his head. He’s moving around.” Their baby boy, whom they named William Adroaldo Reidhead, weighed 6 pounds 12 ounces at birth. Baby Will (Photo via Reidhead GoFundMe)

After birth, baby Will was diagnosed with another rare disease called Aplasia Cutis Congenita. He is missing the back of his skull and his brain is only covered by a thin layer of membrane. His brain is not sticking out of his skull, though, as doctors originally assumed.

Baby Will is currently at Primary Children’s Hospital while doctors are figuring out a plan to move forward. According to a family member who created a GoFundMe account to raise support, baby Will has been laying on his tummy to protect his head. He also had an MRI to assess the situation.

The GoFundMe page shared this message asking for support:

They have a REALLY long road ahead of them.  They are both college students, and Ben is the provider for their family.  They had thought this would be a quick birth and death…but Will is defying all the odds!  He will potentially be at the hospital for months.  They have the struggle of being residents of Idaho, but their baby is in the hospital in Utah….They do have a place to stay while he’s in there.

The family doesn’t have an easy road ahead but William’s birth is a miracle and they’re hoping for more. Visit their GoFundMe page for updates on baby Will’s progress and to see pictures of this beautiful little boy. Congratulations to this couple, who is fighting hard for their little boy regardless of his circumstances. I hope their story of courage can inspire others who are in a similar situation.