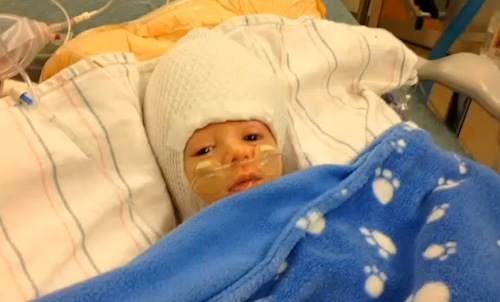 On December 6th, 2013, Kevin and Jennifer Sheridan gave birth to a 12 pound baby boy they named Owen. Owen was diagnosed before birth with a rare disorder called encephalocele. Encephalocele is a condition in which part of a developing baby’s skull doesn’t fully close, allowing the brain to come through the hole in the skull. The CDC estimates that 375 babies in the United States are born with encephalocele each year or 1 out of every 10,000 babies born in the U.S yearly will have encephalocele.

The encephalocele caused Owen to be born with a 7-pound growth on his head. The doctors at the Pennsylvania hospital where he was born informed his parents they were unable to perform the surgery to remove the growth and save his life. The Sheridans were given the news that no parent ever wants to hear:  the doctors didn’t expect Owen to survive long after birth.

Kevin and Jen called multiple hospitals, desperately searching for help until they found a surgeon at Boston Children’s Hospital who was willing to perform the surgery.

In an interview with WHDH 7 News, Kevin said, “They worked a miracle on our child. They did what no other hospital that we could contact was willing to do.”

The operation took seven long hours. Thankfully friends and family were praying for this brave little boy whose name means “warrior”. Owen survived the surgery and his parents were able to hold him for the first time.

Dr. Mark Proctor, a neurosurgeon at Boston Children’s Hospital said, “I think Owen still has a bit of a long road ahead but the fact that they’re able to treat him now like a normal baby and hold him is really gratifying.”

Owen will be fitted with a helmet to shape his head. He is doing well and his parents and loved ones are grateful for his progress.

Kevin Sheridan teaches social studies and coaches football at Bishop McCort Catholic High School in Pennsylvania. In a letter of support from the school they give information for those who would like to help the Sheridan family with medical bills and travel costs. The letter says:

If you would like to assist the family you many send a contribution to BMCHS, please mark “Sheridan Fund” in the memo portion of your check. One can never underestimate the power of both family and prayer. Thank you so much in advance for your support during this season of giving.

I’m grateful Kevin and Jennifer continued to persevere in the face of a seemingly tragic situation. I pray for continued health and strength for baby Owen.