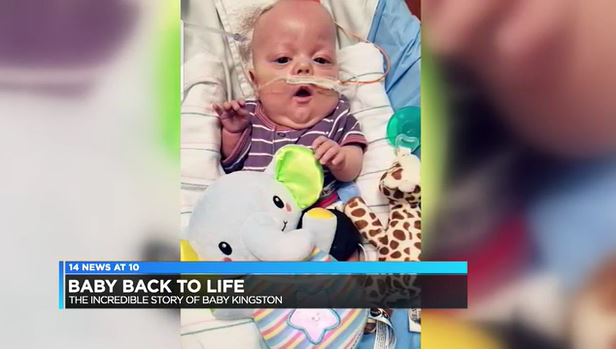 A 10-month-old baby boy is now recovering after he was pronounced dead by hospital workers.

Kingston Lane was born in April 2020 at just 24 weeks weighing one pound, seven ounces, along with his twin brother who tragically passed away a week after their birth. Kingston spent the first seven months of his life outside the womb in the neonatal intensive care unit (NICU) at a hospital in Louisville, Kentucky. He underwent multiple surgeries, including on his head and heart. He has spent the last few months doing well at home.

“He has proved everybody wrong multiple times,” his mother Brittany Lane told WFIE 14 News. “He is amazing.”

On February 20, Kingston was not feeling well and his mother thought he might have an upset stomach. However, by the following day, he appeared lifeless and he was taken to the emergency room at Owensboro Health Regional Hospital. His head was swelling and doctors suspected that the shunt in his head was not working properly. As the medical team was working on him, they had to perform 10 rounds of chest compressions.

“They were on the ninth one, and they were like, ‘Mrs. Lane, one more time and that’s all we can do for him,'” said Lane. “He was completely blue, no pulse, no heartbeat and cold. Super cold.”

The medical team called Kingston’s time of death at 5:45 p.m. They gave him to his mother to hold and began to leave.

“[I was] pretty much telling him to come back to me,” she said. “In that moment, I thought my son was gone. I had to have that feeling of my son just died.”

Then a nurse said that Kingston’s pulse had returned.

“He squeezed my finger,” said Lane. “It was — I really don’t have any words. It was a miracle. It really was.”

Doctors were able to drain some of the fluid that had built up in Kingston’s brain before he was flown to Louisville that evening. His shunt was replaced and there are no new signs of brain damage. He remains in the ICU but came off of the vent on February 25. His mother hopes he will be able to come home in the coming days.

In 2013, another baby boy (who was born prematurely along with his twin sister) came back to life after he was pronounced dead and then handed to his mother. Medical staff spent 20 minutes trying to revive Jamie Ogg after he was pronounced dead shortly after birth. As staff gave him to his mother Kate so that she could say goodbye, she spoke to him and he began to take breaths. Doctors wrote it off as a reflex, but after two hours and increased breathing rate, Kate placed some breast milk on his finger, which he began to drink. Then he opened his eyes.

Babies like Kingston and Jamie are miracles who prove that every baby deserves to have a chance at life, no matter the odds or the challenges.