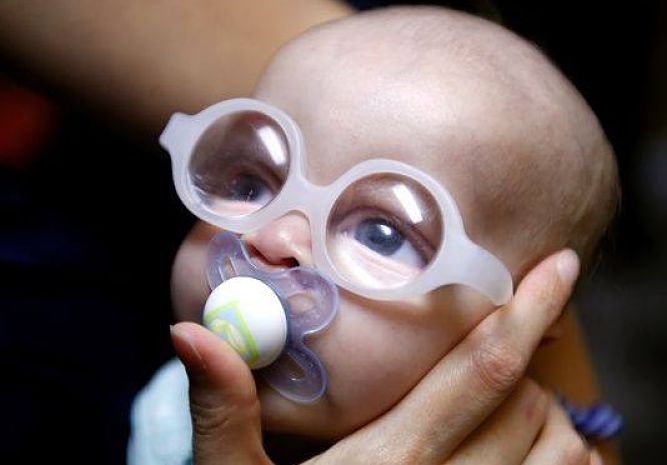 When Brandon and Samantha Castro learned they were expecting their first child, they were just settling into life back in Franklin, Tennessee, with Samantha Castro’s mother, Brandy Blanton. They were saving up for a home of their own and Samantha Castro was working at a nearby high school as a counselor. Her sister, Caitlin Rainey, had also recently moved back home. The household also included their two younger siblings, still in high school.  But it turned out, the couple would need the support of the family.

As the pregnancy progressed, the Castros learned that their baby had what’s known as short long bones, and that she may or may not have a heart defect. Tests ruled out Down syndrome, but doctors couldn’t pinpoint what was causing the baby girl’s problems.

“We were hopeful that they were all wrong, and at the same time (we had) no clue,” Samantha Castro told USA Today. The couple named their baby Elliot Grace, and during her delivery she gave them a scare when nurses couldn’t find a heartbeat. However, she pulled through, and was taken immediately to the neonatal intensive care unit. During a week of confusion and testing, the couple was given the news that baby Elliot has rhizomelic chondrodysplasia punctate, or RCDP, a terminal form of dwarfism. “It was like the most devastating week ever,” said Samantha Castro. “We were just waiting for more to happen.”

Most children with RCDP don’t live beyond age 10, while some with more mild symptoms have lived into adulthood. Those symptoms can include cataracts, seizures, developmental disabilities, lung problems, and heart problems. Doctors said little Elliot would need heart surgery in order to survive, but they gave her parents the option to refuse and take her home to die.

“We were very much on the same page,” said Samantha Castro. “We’re not ready to give up on her.”

Now, she’s four months old and adored by her large extended family. Rainey, who works at night, takes care of her during the day while Elliott’s parents work. Rainey also attended a conference in Alabama for families of children with RCDP, where they celebrated the news of a clinical trial that may help extend the lives of these children.

“The conference was awesome,” Rainey said. “You read about this disease, about how they don’t make it out of the hospital—then you see a kid who’s 13 years old.”

Friends and Facebook fans also support Elliott and her parents, by purchasing light pink wristbands that say “Pray for Elliott Grace,” and they celebrate along with the family Elliott’s accomplishments, including each and every ounce she works to gain. At four months, she weighs just seven pounds.

Community members have helped the family out with meals and monetary donations, as well, which has, at times, been overwhelming to the family.

“It also felt kind of spoiled, like other people must need this more than us,” said Samantha Castro. “It’s kind of balancing that, with this being one of those times, it’s OK to accept something like that. I’m extremely grateful.”

RCDP affects less than 1 in 100,000 babies in the world, but the condition has recently gained more attention. One devoted scientist, Dr. Nancy Braverman, convinced a biotech company to take part in a clinical trial in hopes of improving symptoms of RCDP. The trial is set to begin next year.