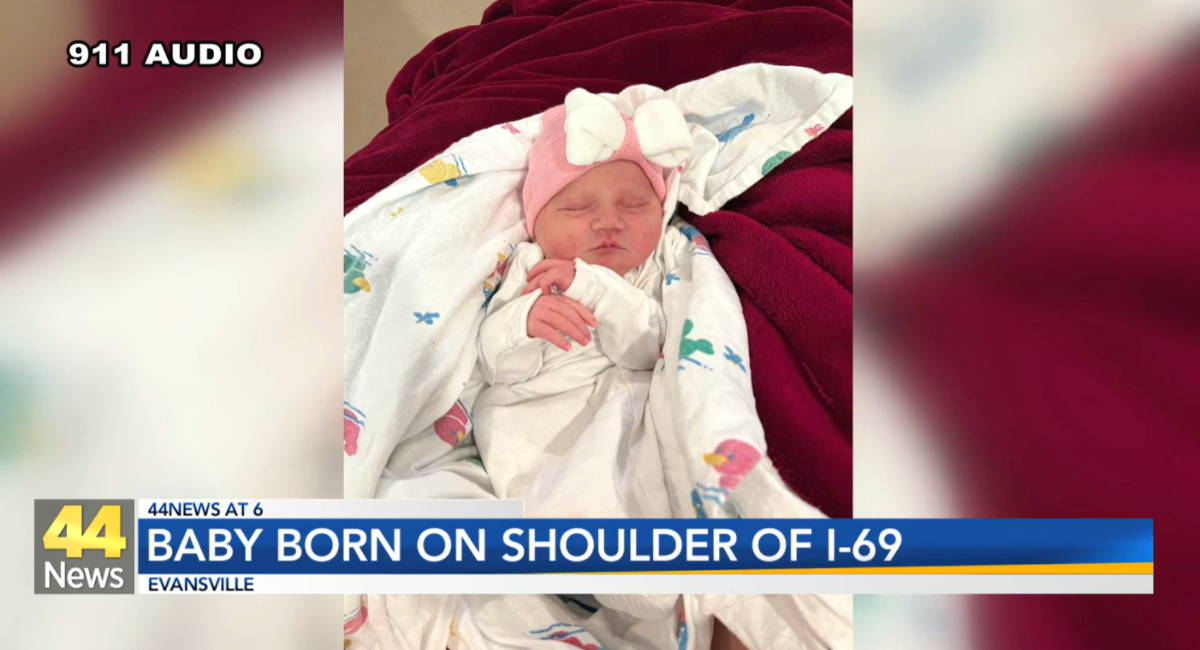 Emily Waddell of Evansville, Indiana, wasn’t too worried when she felt her contractions increasing, but just to be safe she called her husband to come home from work – she felt she still had time. And, having given birth before, she thought she knew what to expect. “Even at that point, whenever I told him to come home, I wasn’t even positive that the baby was coming,” she told WEVV, noting that her contractions at the time were eight minutes apart. Most mothers are told to head to the hospital when contractions are five minutes apart.

But her feelings about the urgency of her situation changed shortly after they got on the highway. “Whenever we were getting on the interstate, I said out loud, ‘I do not want to have a baby in the truck.’ Stephan was like, ‘Don’t worry, you’re not going to.’” But her labor only intensified, and soon she instructed Stephan to pull over on the side of I-69 and call 911.

“So we get to the interstate and we are moving. And that’s whenever Emily kind of grabs ahold of my arm and she was like, ‘You have to pull over NOW,’” Stephan said in an interview.

It was at that point that Emily realized her labor clock had run out, and she could feel her baby’s head coming out. Stephan pulled off the interstate and ran over to Emily’s side, preparing to catch the baby in his shirt, knowing an ambulance wouldn’t arrive in time. “We knew the baby was coming. We knew it was just us there,” said Stephan.

And it was there on the side of I-69, 35 minutes after the start of contractions, that baby Reagan arrived, weighing 7 pounds and 10 ounces and still in the sac.

The 911 operator asked Stephan whether he had anything to cut the cord, and Emily recounted how they used what they had on hand. “Stephan used two phone chargers to tie off the umbilical cord while I suctioned her mouth and nose out with my mouth – which is very difficult when you just pushed a baby on the side of the road,” said Emily in a Facebook post.

After the baby was delivered, Emily called her sister, a labor and delivery nurse while they waited for the ambulance to arrive. “My sister was like, ‘Are you joking? No! You did not just have a baby on the interstate.’ We were like, ‘Yes, we absolutely did,’” Emily related.

Emily was grateful everything went so well, albeit quickly. “Without a doubt, the three of us definitely had all the guardian angels busy looking after us today!”

“That was definitely the coolest thing that we will probably ever do,” Stephan told WEVV. “We don’t want it to happen again, but it was a really special thing, it just being the three of us right there, right away.”