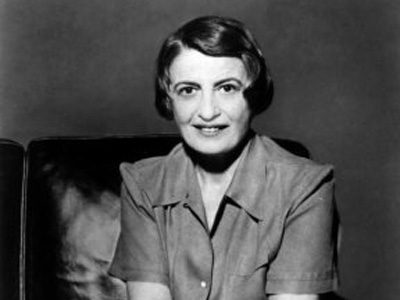 Entertaining, but not enlightened.

According to a compilation of her writings ironically entitled “The Voice of Reason,” Rand held that:

An embryo has no rights. Rights do not pertain to a potential, only to an actual being. A child cannot acquire any rights until it is born. The living take precedence over the not-yet-living (or the unborn).

Abortion is a moral right—which should be left to the sole discretion of the woman involved; morally, nothing other than her wish in the matter is to be considered. Who can conceivably have the right to dictate to her what disposition she is to make of the functions of her own body?

When it comes to Ayn Rand’s views on abortion, it’s difficult to label her. Her arguments tend to be based on the scientific “fact” that abortion affects only the pregnant woman, since the unborn are not scientifically – or otherwise – living, actual beings.

Yet to be “actual” means that something really exists; it’s not some thing that may exist at some future point in time. To say that an unborn child is a potential, and not an actual being, is ignorant of science – science that existed during Ayn Rand’s lifetime.

The fallacies in Rand’s philosophy on abortion are self-evident. In addition to claiming that pre-born children are not actual or living, Rand posits the age-old argument that a woman must be able to do what she wants with her own body. I am unaware of any pro-lifer who has ever disagreed with this statement. But this statement does not apply to abortion, because abortion affects a body that is not the pregnant woman’s. It’s a distinct human with its own distinct DNA and distinct limbs and biologic systems. To say otherwise is, once again, ignorance of established scientific facts.

In another work, entitled “The Age of Mediocrity,” Rand says:

By what right does anyone claim the power to dispose of the lives of others and to dictate their personal choices?

This particular snippet equates pro-lifers, who Rand insists are motivated by hatred for pregnant women and not love, with persons intent on disposing the lives of pregnant women for the sake of a crusade against abortion. It is rabid statements like these from Ayn Rand that make the reader question whether her impassioned ferocity against pro-life activists was possibly motivated by a personal experience of some sort.

A proper, philosophically valid definition of man as “a rational animal,” would not permit anyone to ascribe the status of “person” to a few human cells.

Ah, the classic qualifier: “Since the unborn isn’t _____________, it doesn’t have the right to life.” In the above scenario proffered by Rand, fill in the blank with “composed of as many cells as a grown human.” But where does the distinction definitively come into play? Is the amount of cells in a full-term, 7-lb. baby enough to constitute humanity? What about a premature baby who was born at 29 weeks’ gestation? For that matter, is an obese person the most human of us all, since an obese person has more cells than a thin person? This is the logical failure in an argument that qualifies humanity with something arbitrary. Some will say that to be human, a person must have conscious thought. If that’s the case, a brain-damaged person may not be human. Others insist that to be human, a person must be fully formed. But then what do we do about amputees? When they lost limbs, did their humanity somehow get lost along with them?

Ayn Rand may have been an entertaining and talented author, but when it comes to abortion, her words are not so entertaining, or enlightened.