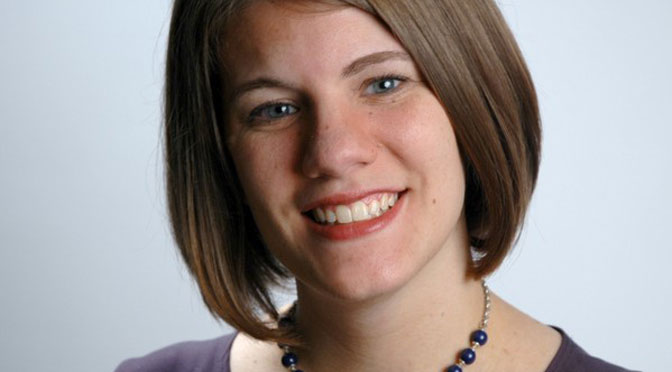 It was a year ago almost to the day that “progressive” Christian Rachel Held Evans wrote about how Planned Parenthood should keep being funded, even though she claims to be pro-life. She’s outdone herself this time.  In a blog post in which she tells her readers to vote for pro-abortion Democratic presidential candidate Hillary Clinton, Evans manages to contradict her pro-life stance many times over.

Or, put another way, I believe the sacred personhood of an individual begins before birth and continues throughout life, and I believe that sacred personhood is worth protecting, whether it’s tucked inside a womb, waiting on death row, fleeing Syria in search of a home, or playing beneath the shadow of an American drone.

As she proceeds to describe how she has voted for pro-life and pro-choice candidates, most recently Barack Obama, she adds:

She is correct that no party alone holds the answer to ending abortion — though only one party endorses taxpayer funding of abortion and seeks to overturn all pro-life laws in its official platform — but, politics aside, she does a disservice to pro-lifers telling them they need not “overburden [their] conscience[s]” by thinking too deeply about the candidates’ stances on abortion. In fact, she implies a pro-abortion leader may help the abortion rate:

In the eight years since we’ve had a pro-choice president, the abortion rate in the U.S. has dropped to its lowest since 1973. I believe the best way to keep this trend going is not to simply make it harder for women to terminate unwanted pregnancies but to create a culture with fewer unwanted pregnancies to begin with. Data suggests progressive social policies that make healthcare and childcare more affordable, make contraception more accessible, alleviate poverty, and support a living wage do the most to create such a culture, while countries where abortion is simply illegal see no change in the abortion rate.

Evans does not cite her data, but she clearly did not read about this landmark Chilean study which showed that restricting abortion actually improved women’s health. Evans is caught up in the same idea she used last year to keep funding Planned Parenthood: that we should focus on changing the heart with good social policies. While social policies to help women are good, it isn’t good to fund the nation’s largest abortion chain and pleading with people to eschew candidates’ abortion platforms.

By focusing exclusively on the legal components of abortion while simultaneously opposing these family-friendly social policies, the Republican Party has managed to hold pro-life voters hostage with the promise of outlawing abortion, (which has yet to happen under any Republican administrations since Roe v. Wade), while actively working against the very policies that would lead to a significant reduction in unwanted pregnancies.

But she ignores the new Democratic Party platform that will certainly not help to decrease the abortion rate, and reveals her true agenda of abortion support when she says (emphasis added):

So even though I think abortion is morally wrong in most cases, and support more legal restrictions around it, I often vote for pro-choice candidates when I think their policies will do the most to address the health and economic concerns that drive women to get abortions in the first place. For me, it’s not just about being pro-birth; it’s about being pro-life. Every child deserves to live in a home and in a culture that welcomes them and can meet their basic needs. Every mother deserves the chance to thrive.

Pro-lifers agree that every child deserves to be welcomed — which is why we encourage adoption and parenting instead of killing, and support ministries and other groups that help women in their time of need. But in order to give children what they deserve, shouldn’t one first at least make certain that they are allowed to be born? It seems highly unlikely that a culture which allows (and even funds) abortion will ever become a culture that welcomes children or helps mothers to thrive.

Further proving she has no grasp of the reality of what would happen if abortion were restricted, Evans argues:

Forcing millions of women to have children they can’t support, or driving them to Gosnell-style black market clinics, will not do. We have to work together—pro-life and pro-choice, Democrat and Republican, conservative Christian and progressive Christian—to create a culture of life that celebrates families and makes it easier to have and raise kids. This is the only way to make our efforts at rarifying abortion truly sustainable.

Again, how can we possibly “create a culture of life that celebrates families” if we as a society are accepting of legalized abortion, at any stage, for any reason, without restriction?

The myth of back-alley abortions is just that: a myth. Kermit Gosnell isn’t what happens when abortions are “black market” — Kermit Gosnell is what happens when the legal abortion industry gets no oversight. Many abortion centers are not inspected or regulated even as much as tanning salons. The list of women being rushed from abortion facilities to emergency rooms is far too long to be coincidence. And internal memos found during a Missouri Senate Panel’s investigation of Planned Parenthood revealed a disregard for women’s health, including instructing women to call the clinic instead of 911 in an emergency. The report notes that “[i]t is difficult to conceive of any other organization, let alone an organization that holds itself out as providing women’s health services, being so recklessly indifferent to the health of their patients….”

But Evans sees with rose-colored glasses rather then the blood-stained ones that are reality. She closes her political endorsement with four points:

“First, voting pro-choice is not the same as voting for abortion.”

Actually, voting pro-choice means voting for people who will do nothing to stop the 2500-3000 abortions per day in America alone. That’s voting for abortion. Period.

“Pro-life advocates should support, rather than oppose, efforts to help low-income families care for their children.”

To be pro-life is to support efforts to help all life. Texas (run by Republicans, by the way) has recently proven this by expanding its healthcare to poor women. Low-income Texas women now have more support than when abortion was funded. Nationwide, there are thousands of federally funded health clinics, compared to Planned Parenthood’s hundreds. There is no contest as to where women can find actual support, and it’s not an abortion provider.

“Fourth… if we want to dramatically reduce the abortion rate in this country, we must support efforts to make contraception more accessible and affordable.”

Contraception is accessible all over the nation. Women without health insurance can get it from publicly-funded clinics. And some contraception costs as little as $9 a month at places like Walmart. It can’t get much more accessible and affordable.

But Clinton is far better positioned to keep the abortion rate at the record low it saw under President Obama while the Republican Party works for the next four years to produce the kind of candidate the people of this country deserve.

What Evans omits in her lauding of President Obama and the reduced abortion rate is that the 2010 midterm elections brought out masses of pro-life legislators who passed laws restricting abortion. She is right that the abortion rate went down under President Obama’s leadership, but she is incorrect in attributing it to his policies.

And while Evans claims to be a Christian who holds to biblical teachings, she said in 2013 that she doesn’t even believe life begins at conception:

And when I was honest with myself, I had to admit that I don’t know exactly when life begins (at fertilization? at the first heartbeat? at the existence of brain waves?). Does the Bible, or Christian tradition, really make this abundantly clear?