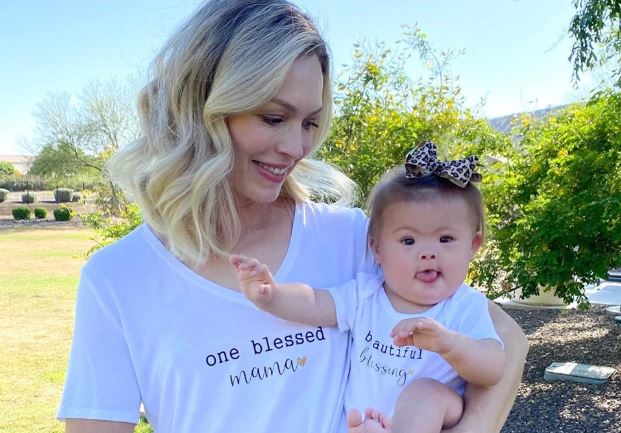 Arabella Kim, born July 17, 2019, is a beautiful baby girl who miraculously survived a death sentence given before her first breath. Her parents, Tiffany and Paul Kim, discovered before the 20th week of pregnancy that Arabella had a 98% chance of being diagnosed with Down syndrome after they received results from the mother’s blood test and a nuchal translucency test with an ultrasound confirming the percentage. On top of this diagnosis came the added danger of a condition called hydrops. This is when fluid builds up in the abdomen, lungs, and/or head of the baby. There is usually no treatment for this during the pregnancy, and only 20% of the babies diagnosed with hydrops “will survive to delivery,” and only about half of those who survive will live after delivery, according to Healthline Parenthood.

Love What Matters shared Tiffany Kim’s experience in her own words: “I immediately started to sob and was overcome with grief and despair. I knew the odds were greatly stacked against us and I would most likely never get to meet my baby girl earthside.” The couple immediately began seeing an obstetrician specializing in high-risk pregnancies and monitored baby Arabella by ultrasound every two weeks. The hydrops worsened and spread from her head, neck, and stomach to her heart, lungs, and extremities. Kim continued:

They were also seeing heart defects on the ultrasound. She most likely was in heart failure. Baby Arabella was given an ultimate 5-10% chance of being born and surviving birth afterward. Until a miracle occurred: at around 20 weeks, the fluid was completely gone and no serious heart defects appeared.

Watching Big Sister at swim class😊 Baby Arabella is a true miracle. She was ultimately given a 5-10% chance of ultimate survival after they found fluid surrounding her heart, lungs, stomach, and extremeties at around 12 weeks in utero, a condition called Hydrops. This was in addition to the Down Syndrome diagnosis. They thought she was in heart failure and could see some unknown serious heart defects. Every time I went in for an ultrasound, (every 1-2 weeks),it was to check when her little heart had stopped beating. But little by little the ultrasounds were showing improvement! The fluid was disappearing from her extremities, then her stomach, then her lungs, and finally, her heart. Then ultimately, it was gone! And her heart? No heart failure and only a couple of very minor defects. So many people prayed for this little baby and I am forever grateful to them and to God. She is our miracle. Read her full story here: https://feedingtrials.com/our-miracle/#downsyndrome#downsyndromelove#downsyndromeawareness#downsyndromeawarenessmonth#theluckyfew#gigisplayhouse#gigisplayhousephx#sharingdownsyndromeaz#sharingdownsyndrome#hydrops#hydropssurvivor#miraclebabybella#downsyndromelove#gcwbaby#cricutexploreair2#cricutcreated#gcwbaby#hydrops#hydropssurvivor#globaldownsyndromefoundation#worthy#dsdn#nobodytoldme#positiveaboutdownsyndrome#iceland#statementonesies#babylove#momlife#miraclebaby

Born at 7 pounds and 1 ounce, Arabella had no need for the NICU. Kim said, “They were able to immediately lay her on my chest (instead of rushing her over to get vitals on her like they did with my two other typical kiddos). There was no need for the NICU, no need for supplemental oxygen, and she was able to even latch and breastfeed almost right away.”

READ: Family of teen with Down syndrome ordered to leave Australia in 35 days

Joy and relief filled the Kim family as they celebrated their healthy baby girl. “The moment I first held her in my arms, I was overcome by her beauty and overwhelmed with thankfulness. And my fears concerning Down syndrome melted right away. I was just grateful she had come safely and healthily into this world.”

When reflecting on the fear and worry about having a baby with Down syndrome, Kim explained that she experienced feeding struggles with their two older children and that she deals with Chronic Fatigue syndrome. “If only myself back then could have fast-forwarded ahead to the day Arabella was born and to the present. Because then, I would have been able to see there was nothing to be afraid of and that my life would actually be infinitely better because of Arabella being in it,” she said.

Isn’t this the perfect picture for our family Christmas cards?!😂 I didn’t use it but I totally should have! And Yep, I just now ordered our cards and they aren’t even here yet. So now they are going to be Happy New Year cards instead of Christmas cards😂 . . . #hotmessmom#christmascard#christmascards2019#christmascardphoto#christmascardfail#familyphotos#motherhooduncensored#babiesofinstagram#momsofinstagram#nothingdownaboutit#specialneedskids#theluckyfew#downsyndrome#downsyndromelove#t21#trisomy21#downsyndromerocks#familyphotofail#saturdaymorning#betterlatethannever#miraclebabybella#happynewyear#merrychristmas#dsdnchristmas

Other parents of children with Down syndrome echo her words of value and worth about their own children. Live Action previously reported the story of Jesse Hartman, a boy thriving with Down syndrome and featured in the documentary Pro-Life Without Exception. Hartman’s father, Jim, explained:

Certainly, we had some challenges, but they were nothing compared to the blessings. So, there were some medical challenges along the way, but we had medical challenges with other children too… If we have a child who breaks a leg, we get it fixed. That’s just the way parents are. You don’t decide that it’s got a value – okay, it costs too much – because we would give everything we had for any one of our children, including him.

🌈 Today’s #onesiewednesday 🌈 Every Wednesday I will be featuring #statememtonesies that I make for baby Arabella. My hopes are to describe who she is, shout to the 🌎 how wonderful she is, and to spark conversation. I believe that although it is small, it might be a step towards one day leading to the acceptance of Down Syndrome. . . . #downsyndrome#downsyndromeawareness#theluckyfew#다운증후군 #ダウン症候群#sindromededown#iceland#cricutcreated#makeitwithmichaels#babyfashion#cutebaby#beautifulbaby#babyood#momlife#babylove#momblogger#phoenixblogger#azblogger#miraclebabybella#myformerbump#babycenterbabies#MightyTogether#gcwbaby#sharetheeverymom#prenataldiagnosis

Unfortunately, many parents are pressured to abort their children after receiving a Down syndrome diagnosis. Danielle Bolt, an Australian mom to daughter Noa, experienced high pressure to abort Noa when a Chorionic Villus Sampling (CVS) test came back positive for Down syndrome. “I was told to terminate by the specialist,” she explained. “They literally said to me Noa will become a burden on society and she’s not worth it. It’s so cruel because they don’t know her potential.”

Ruth Eder, another Australian mom, shared a similar experience when she was told by friends to abort her daughter. “I had friends who were orderlies and things telling me that ‘oh many of these cases, they don’t come out nice… the doctors are recommending a termination, you should be going for it,’” said Eder.

Every life has value, regardless of the medical challenges they encounter. People with Down syndrome are no exception.