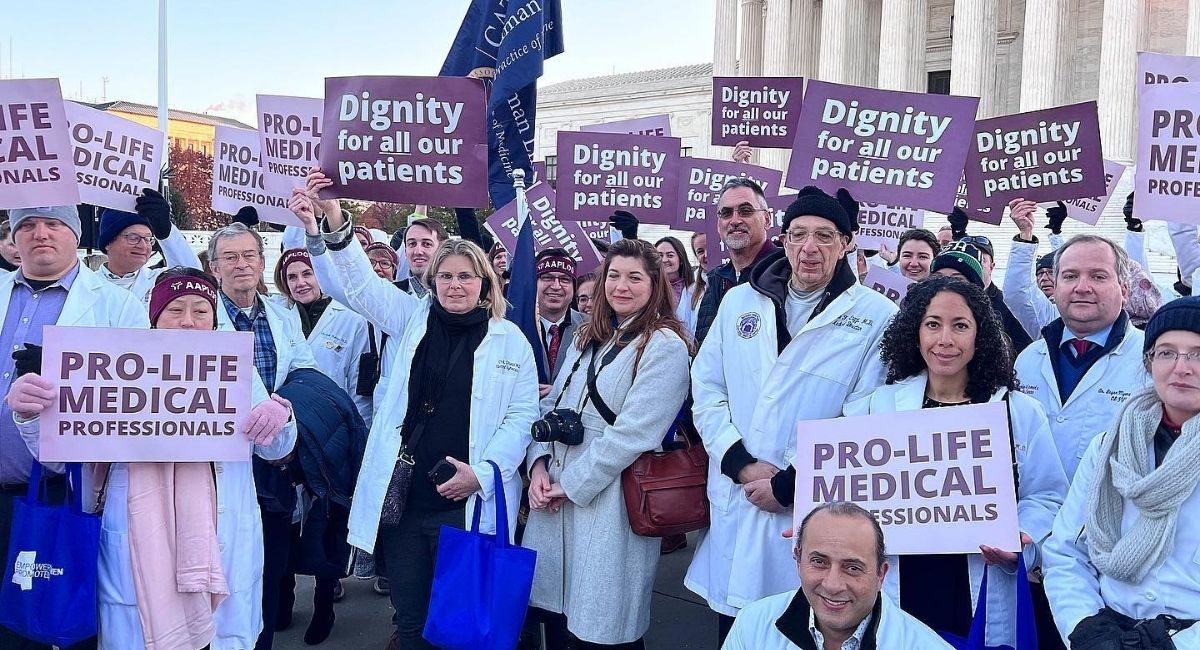 The photo shows the doctors outside the Supreme Court building during last week’s oral arguments for the abortion-related Dobbs v. Jackson Women’s Health Organization. Thousands of pro-lifers had gathered in support of Mississippi’s 15-week abortion restriction, and among the demonstrators standing for life were 80 members of the American Association of Pro-Life Obstetricians and Gynecologists, who had also filed an amicus brief in the court.

In the photo, which appeared in an AP photo syndicate, the doctors are seen wearing lab coats and holding signs reading “Dignity for all our patients” and “Pro-life medical professional.” The AP’s caption read: “Healthcare workers protesting in doctor’s uniforms outside of the Supreme Court on Wednesday, December 1, 2021,” essentially negating their collective professional expertise and minimizing their presence. The Federalist reported that one AP photo described the pro-life doctors as “anti-abortion protesters wearing doctors uniforms.”

The photo appeared in multiple AP syndicates, including in an article in Business Insider profiling many of the protesters and counter-protesters present with a segment on the AAPLOG contingent. “As physicians, we stand against abortion,” AAPLOG board chair Dr. Christina Francis told Business Insider. “We’re here because we care about our patients,” she continued, saying that women deserve to have more information, not less, when it comes to abortion and its real costs, alternatives to abortion, and options available to support life.

READ: Doctor says despite what you might think, most OB/GYNs don’t take part in abortions

Dr. Francis also spoke to Live Action News, saying, “[…W]e were all here together to make a visual statement that abortion is not health care, and that, as medical professionals, we acknowledge that the science shows that preborn children are living human beings from the moment of fertilization, and that abortion is harmful for women. I talked with several other people from within the pro-life movement here today who said how encouraging it was to see 80 white coats in front of the Supreme Court.”

Despite what the AP would have its readers believe, pro-life OB-GYNs are far from rare. OB-GYNs have spoken out about how most do not want to perform abortions. Indeed, in both the Republic of Ireland and Northern Ireland, pro-life OB-GYNs have been a major stumbling block to the implementation of an abortion agenda.