The gift of hope and a future. 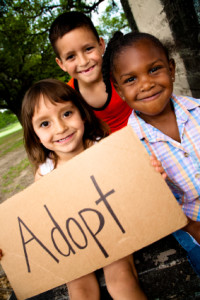 1. Your baby will end up in foster care

Many abortion advocates will claim that there are not enough people willing to adopt and point to the fact that there are an estimated 400,540 children in the American foster care system. While this number is sobering, and steps should definitely be taken to reduce it as soon as possible, it is not a number that affects adoption as a viable alternative to abortion for women who are not ready for parenthood.

Let’s look at the facts: according to a 2011 study by the Health and Human Services Department, an estimated 2.6 million Americans have taken concrete step towards adoption, and an estimated 18.5 million Americans have at least considered adopting a child. The HHS study additionally states that those seeking to adopt showed a preference for children under two – a criterion that newborns certainly would meet.

When a birth mother decides on adoption, she can seek out any number of private adoption companies that will help her connect with a family who desperately wants to adopt her baby. Foster care is not even in the picture.

This brings us to the next myth:

2. You will never know if your child is being taken care of

A 2012 study by the Evan B. Donaldson Adoption Institute found that 95% of private adoptions in American are “open adoptions.” An open adoption means that the birth mother chooses the family for her baby, and both parties agree to the sharing of information, and to maintain a certain level of ongoing contact throughout the years. In an open adoption, a child grows up knowing where he came from, his medical history, and that the decision to place him for adoption was a decision made out of love.

A 2007 Health and Human Services study looked at the effects of adoption on children and found the following:

3. Adoption is abandoning your baby

Far from being abandonment, adoption is amazing and admirable. It takes a remarkable amount of selflessness and courage to place a child up for adoption. It means recognizing that you are not able to be the parent your child deserves, and making sacrifices to ensure that she is taken care of the way she should be.

Attitudes on adoption have also changed over the years, with two thirds of Americans having a favorable opinion of adoption. Additionally, two-thirds of Americans have a personal connection with adoption, be it through being an adoptive parent, sibling, or adopted child, or knowing someone who is one of those things.

There are many stories available online detailing how adopted children feel about their adoption, and I personally can attest to my gratefulness to my birth mother.

My birth mother was only 19 when she had me, and she already had 3 other children. Those in the pro-abortion lobby would say that my mother would have been totally justified in aborting me, but she chose life. While I was not adopted at birth, but later placed in foster care with my siblings, I still have a deep respect for the choice my birth mother made in relinquishing her parental rights so that I could be adopted along with my brother and sister (another brother was adopted by a different family). I always knew that I was adopted, and my parents made sure to explain that I was placed for adoption not because I wasn’t loved, but because I was loved very much both by them and by my birth mother.

I am very aware of the different path my life could have taken, and when I look at where I have ended up, I feel a great sense of being blessed beyond what I deserve. My parents are amazing, selfless people (although when I tell them this, they assure me that they are just normal people), who took three children who needed a family and gave them love and stability.

Adoption is a truly amazing thing, and it should be encouraged for those women who are facing an unplanned pregnancy. While they might not be ready to be parents, they can still be amazing mothers by giving their children the gift of a family, of love, of security – the gift of hope and a future.