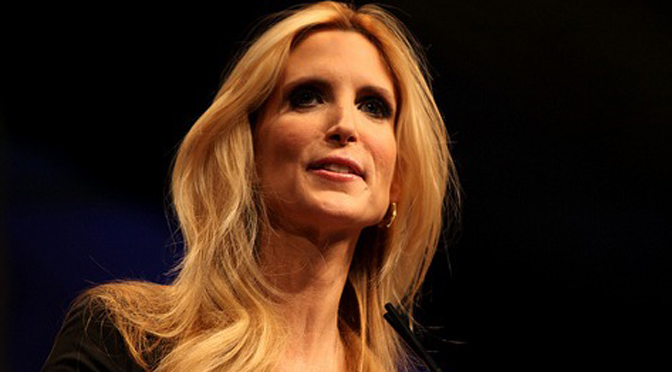 Ann Coulter is infamous for making horrendously offensive comments. Take, for example, her unneeded opinion on Dr. Kent Brantly, the Christian doctor who risked his life to help Liberia’s Ebola patients. Coulter stated that the “Ebola doc’s condition” was “downgraded to ‘idiotic,'” writing:

If he had provided health care for the uninsured editors, writers, videographers and pundits in Gotham and managed to open one set of eyes, he would have done more good than marinating himself in medieval diseases of the Third World.

Clearly, Coulter has a major problem realizing that all human beings are equally valuable – be they “third world” citizens or preborn children. And claims that she is joking, using hyperbole, or exaggerating her actual opinion just aren’t valid here.

I don't care if @realDonaldTrump wants to perform abortions in White House after this immigration policy paper. http://t.co/l7nq8gN7i5

While unrepresentative of many Americans’ feelings on the issue, Coulter’s words do lay open a festering wound in our culture.

All too often, “conservatives” throw off abortion as something we “focus too much on.” (Take this silly statement by John Kasich as an example.) They emphasize the economy, immigration, healthcare or welfare reform, education, jobs – or some other pressing issue – as the real deal in the U.S.

While some of the above statements are actually accurate, they miss the huge, two trillion pound, blood-red elephant in the room.

The greatest threat to American success is our rampant killing of our own children. We are killing off our own population at an incredible rate – approximately 1.06 million lives are taken every year through abortion (Planned Parenthood alone kills over 300,000).

Many of our systems – Social Security included – are broken because, while we have an elderly population, we lack the workers to support the system. Why? Because we killed them. The ones who should have been.

How can we truly reform education without first valuing the children we are striving to teach and to prepare for this new century?

Immigration, welfare, healthcare, taxes… absolutely important issues we must find solutions to. Yet each pales in comparison with the fact that we allow abortion on demand at practically every stage in pregnancy. America has so few restrictions that our laws join only six other world nations in being so permissive.

We keep ranks with China and North Korea.

I shudder to bring up the Nazis, as so many dismiss the comparison point blank, and yet – do we not remember that the Germans loved Hitler for what he did for the German economy – the German issue of the day? Many of the countries committing the greatest human rights violations in history have been “right” on a number of issues. They reformed their own economies and benefited their own nations with foreign policy. At the same time, however, they massacred an entire group of human beings.

The world now looks at these countries with disdain and horror. I am proud to be an American. I have always been proud to be an American. But I will continue to insist that we end the purposeful deaths of our children until abortion stops. We cannot truly be a successful, prepared, forward-thinking nation until we move out of the modern Dark Ages and stop the full-blown killing of an entire class of human beings.

So, Ms. Coulter, if you fail to see how despicable and horribly gross your statement is, then you, too, are stuck in the Dark Ages.

If you messed up, then apologize. If you can joke for one tweet about abortions being performed in the White House, you are not moral.