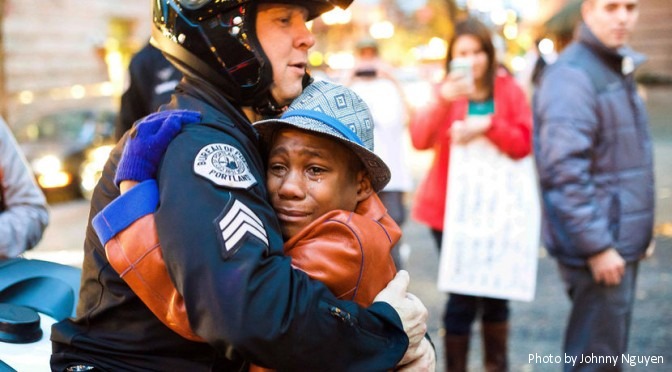 Devonte Hart is touching the hearts of hundreds of thousands across the country. An image taken at a Ferguson Rally shows Devonte hugging a police officer with tears streaming down his face. As soon as the picture was posted this 12 year old boy from Portland, Oregon became a symbol of hope in the midst of a nation divided by racial tensions.

Devonte was at the rally with his mother, Jen Hart. As Devonte held a sign that said ‘Free Hugs’ a police officer came over to talk with him. After making general conversation Sgt. Bret Barnum asked Devonte why he was crying. Devonte expressed the concerns on this heart and the officer listened, empathized and asked him if could have a free hug. Devonte obliged, Johnny Nguyen, a freelance photographer captured the moment and it went viral after it was posted on social media.

If you think their hug was beautiful, the story of Devonte’s life story is even more powerful. Devonte, along with two of his siblings were adopted seven years ago by a white couple, Jen and Sarah Hart. Devonte is one of 4 children the Hart’s have adopted. Jen told Paper Trail online news that she wasn’t sure how she would raise Devonte. He was born with drugs in his system. By the young age of 4 Devonte had smoked, handled guns, been shot at, consumed alcohol and endured abuse.

Although Devonte was old enough to be speaking in full sentences, he only knew a few words and some of them were curse words. He had a number of disabilities and struggled with violent attitudes.

Jen told Paper Trail, about the fear she struggled with when they first met.

“That night, after we finally got him to sleep, I cried harder than I had ever cried in my life. I felt like there was no way we could raise this child, and the five others we had adopted.”

Although she felt overwhelmed and uncertain, something was pulling at her heart. She recalled:

“I felt more connected to this fragile little boy more than I had ever felt to anyone in my life.”

Jen and Sarah made a brave choice to love a child in spite of his circumstances. Jen told Paper Trail that Devonte has proven doctors, psychologists and teachers wrong. When people tell the Harts that Devonte is lucky they adopted him, they share that they are the real lucky ones.

Devonte’s story gives me hope. Hope for every child that’s unwanted or neglected. Many argue that abortion is a merciful option for children born into circumstances like Devonte’s. They believe it’s justifiable to terminate a child to spare them from potential abuse. Imagine the absolute beauty that would have been lost if Devonte never existed. We can never know the potential a single life holds. Devonte was born into negative circumstances, but he overcame through the love of his adopted parents. Adoption is a powerful force for good in this world . Let’s follow Devonte’s example. Shed a tear, give a hug and open your heart to someone in need. Your act of compassion could just change a nation.