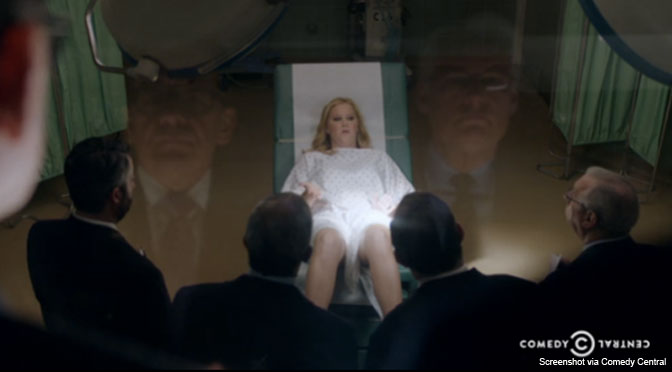 For Thursday’s season premiere of Comedy Central’s Inside Amy Schumer, comedian Amy Schumer, who has made pro-abortion jokes before, appeared in a sketch known as “Dr. Congress.” Actors posing as male congressmen have replaced her doctor to perform her pap smear as members of the House Committee on Women’s Health. They laugh off that they have “a better idea than any science-y nerdles” once Schumer asks if they have any medical training.

The four men are clueless, with one muttering “ew” every so often, and ask questions like “when was your last lady curse.” There was also a sense of shock that Schumer was sexually active but not married, and that at 34 had had no children.

It turns out that more congressmen will be watching once the exam is to begin. Schumer, who says she would be more comfortable with a woman present and asks if any are on the committee, is laughed off and told, “That would be like letting the lions run the zoo!”

The truth is that there are many female pro-life politicians. One, Rep. Diane Black (R-TN), actually does have medical training, having been a nurse for 40 years. She’s on the Pro-Life Caucus, in addition to caucuses to do with cancer and health care.

There is no ‘committee on Women’s Health,’ nor will there likely ever be, at least not as Schumer and other pro-aborts see it. But if there was to be one, it’s likely Rep. Black would be qualified to serve on it, shooting down the concerns that women’s health care decisions are being made by male politicians.

Many in the media ran with the sketch. The Daily Beast, which has posted pro-abortion articles before, including just recently, writes that “Amy Schumer Torches Republican Congressmen for Wanting to Control Women’s Bodies.” The piece also connects the sketch to the “abusrd[ity]” of Donald Trump’s initial comments about punishing women for having illegal abortions — or as they put it, “for making choices about their bodies.”

The sketch was also shared by NARAL Pro-Choice America on their Facebook, and Twitter, linking to The Daily Beast.

Vox and New York Magazine’s TheCut are among others who laud Schumer’s efforts, while fearing the sketch as if it has already happened or is soon to take place. Vox claims that “watching these men lecture a woman on their bodies is infuriatingly familiar,” while New York Magazine’s headline reads “Amy Schumer Imagines a Not-So-Unrealistic World in Which Congressmen Are Your Gynos.”

Their tweet even claims that the “sketch is honestly scarier than most horror movies.”

This @AmySchumer sketch is honestly scarier than most horror movies: https://t.co/Tqj3U0tKFa pic.twitter.com/2BBB1HKfpK

Such abortion advocates completely miss the point of the pro-life movement. Immature stereotypes may work as a comedy sketch, but what’s truly “scarier than most horror movies” is that people are actually taking the false narrative as reality. To hear them tell it, men are the only ones making decisions about abortion, all while they’re told they’re not allowed to have an opinion on it unless they’re in favor of it.

Perhaps no other outlet ran with the opportunity to use the sketch to criticize the pro-life movement like Attn, with their headline of “Amy Schumer Just Used a Hilarious Pap Smear to Nail to Problem with Abortion Laws.”

The piece rants against pro-life legislation in Oklahoma (whose governor is a woman), Mississippi, and Indiana, where the reader is incessantly reminded that men were involved in these laws or proposed laws by “dictating women’s health decisions across the U.S.”

The idea from Schumer’s sketch is one the abortion industry has turned to before. Planned Parenthood Action Fund warns against  “Gynoticians,” described as “politicians posing as experts,” who introduce pro-life laws.

.@amyschumer takes on the #gynoticians that practice medicine without a license in Congress. https://t.co/yh3oegc2oS pic.twitter.com/J4mMJdBROw

Planned Parenthood CEO and President, Cecile Richards, also made political remarks during her speech at Georgetown, according to those who attended.

“I can’t wait for the day that partisan politics gets out of reproductive health care in America.” – @CecileRichards

If anyone has done harm to women’s health – specifically pap smears – it’s Planned Parenthood, which claims to be in favor of women’s health while decreasing their legitimate health services (and increasing abortion) and receiving more taxpayer funding.

The reason why pro-life politicians, of any sex, use their position as elected officials to sponsor and pass pro-life laws is because they care about protecting innocent preborn human lives, as well as their mothers.

Politicians who are in favor of such laws are not aiming to dictate women’s health — because abortion is not healthcare.