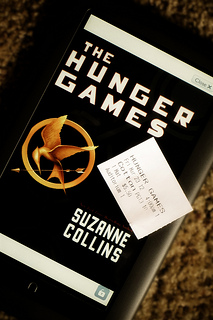 Suzanne Collins’s book The Hunger Games has become the latest motion picture hit, maintaining the number-one spot at the box office for several weeks in a row. Viewers and readers have speculated over themes of feminism, politics, and religion that surface throughout the plot. But while Americans reel in horror at the savagery of the Hunger Games, the deeper truth of the story has gone largely unnoticed.

How could a society become so desensitized to violence, so indifferent to the shedding of innocent blood? We shudder inside and shake our heads in disbelief, gratefully reminding ourselves that our country of “liberty and justice for all” bears little resemblance to the dark Capitol of Panem.

Except that’s exactly it. We have become like the citizens of Panem, deadened to cruel actions of injustice. Yet our society’s indifference is significantly worse. While the brutality of the Hunger Games is shocking, there exists another atrocity even more horrific than children killing children. This abomination defies the precious love of family – a mother killing her own child.

In America, over one million children are murdered by their mothers each year. These killings are not an annual event; they happen every day. Lacking the significance to be considered a spectacle, this slaughter is an accepted part of our society. The violence of abortion exceeds the violence of the Hunger Games in numerous ways. Unlike Katniss and her competitors, who are forced to enter the games and kill for their own survival, mothers in America aren’t being forced to kill their children. These mothers choose the murder of their own flesh and blood – the death of a tiny, innocent child. Before entering the competition, the children of the Hunger Games are armed to defend themselves. Yet the children of abortion are unarmed in their mothers’ wombs, completely unable to defend themselves against the abortionists’ cruel instruments. Provided no chance of survival, these children are attacked when they are most vulnerable and weak.

Suzanne Collins intended to make her audience recoil in horror at the idea of a society pitting children against each other to fight to the death for the purpose of entertainment. Yet our society is setting unborn children against their mothers in a struggle for survival – a battle that results in the death of the child – in the name of women’s empowerment. Except the child in the womb has no place to run to, no weapon to fight with, and no potential allies.

The Hunger Games is a poignant reminder that we are fighting an injustice even greater than the horrors of the cruel games. Even pro-lifers are susceptible to a degree of apathy, as we become accustomed to the constant reality of abortion in our country. The Hunger Games is a not an alarming prospect of what our nation could become; it is a piercing reflection of the current state of our society. The irony lies in the fact that we, like the citizens of Panem, have become apathetic to heinous violence. And when people become indifferent to injustice, the unthinkable becomes acceptable. Even the murder of innocent children.