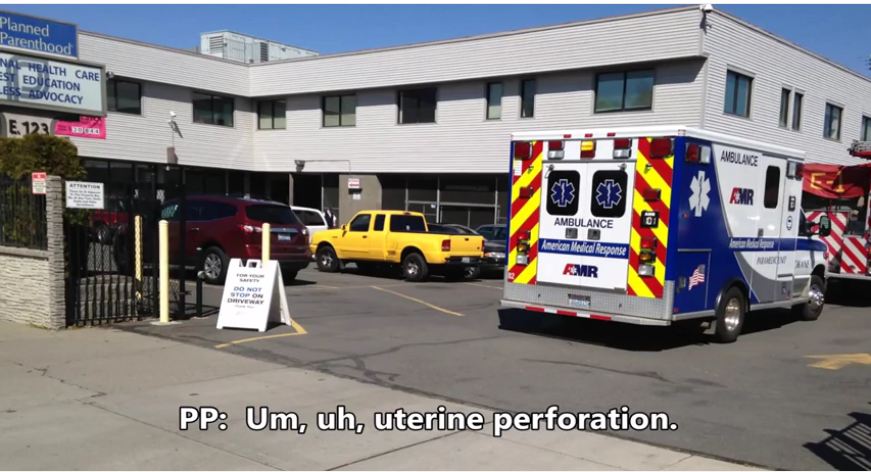 The 911 call was placed by Planned Parenthood in Spokane on September 16, 2015, for a patient suffering from a “uterine perforation.” Though the Planned Parenthood caller does not state the perforation was due to a botched abortion, Cheryl Sullenger, Operation Rescue’s senior Vice President said that uterine perforations generally occur when the sharp abortion suction cannula, which is used to dismember the preborn baby, is thrust too deep into the uterus, tearing a hole in the woman’s womb.

The Spokane center is operated by Planned Parenthood of Greater Washington and North Idaho (PPGWNI), and the medical director is Denise Bayuszik, MD, according to her LinkedIn page. A 2014 990 from PPGWNI shows that a Dr. Charlie Browne also works for the affiliate, though it does not state in which centers he operates. Planned Parenthood has been the center of scrutiny following revelations from the Center for Medical Progress that the taxpayer-funded organization is illegally selling, for profit, the harvested organs of aborted children. As a result of the horrific revelations, Planned Parenthood’s president, Cecile Richards, who previously called their services, “high-quality reproductive health care,” was summoned to testify before Congress during hearings to decide whether they should remain federally funded, to the tune of $528 million dollars annually.

Previous 911 calls from the Washington State Planned Parenthood and documented by pro-lifers, include one in January in which a pro-life sidewalk counselor testified that employees laughed while a patient was loaded into the ambulance. A 911 recording in March indicated that Planned Parenthood was unable to stop a patient’s bleeding, prompting the abortion business to call an ambulance to rush her to the hospital.

Sullenger said that Planned Parenthood emergencies account for two-thirds of the medical emergencies Operation Rescue has documented at abortion clinics, including ten at the Houston Planned Parenthood mega-center featured in one of the most horrific baby parts harvesting videos released by the Center for Medical Progress. More on that here.

To further expose the evil that is Planned Parenthood, on Saturday, October 10th, pro-lifers will gather outside Planned Parenthood clinics nationwide to call for the defunding and closing of the abortion business. The #ProtestPP event is expected to have demonstrations outside facilities in every state and as well as various other abortion clinics in three different countries.