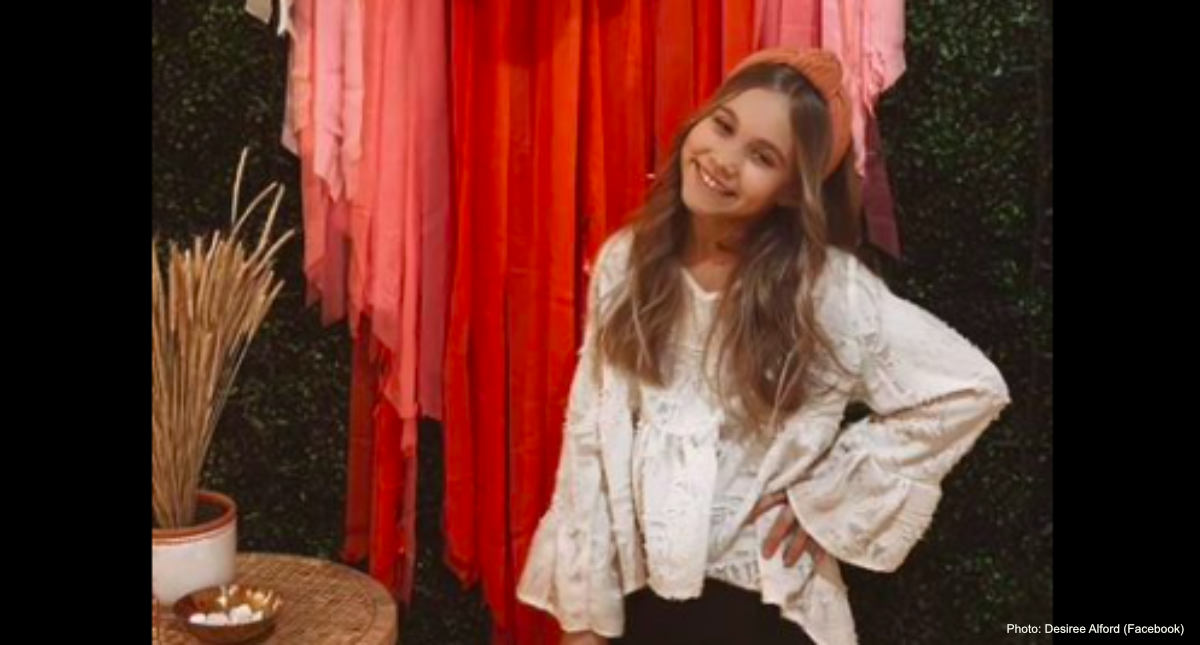 Desiree Alford knows firsthand how an unplanned pregnancy at the wrong time can make abortion seem like the only way forward. In a beautifully written Facebook post for Valentine’s Day, Alford shared that 10 years earlier, she had been scheduled for an abortion. “The night before my appointment God worked a miracle in my life. Not a day goes by that I don’t think about all that I ALMOST missed out on,” Alford wrote. “It’s hard to even type but I share to hopefully inspire another person that is in the middle of a hardship. Sometimes our pain wrecks us for good.”

“They were working behind the scenes”

In an interview with Live Action News, Alford said, “I was brought up in a conservative home. We went to church growing up, and if you had asked me about abortion I had strong opinions on it. It wasn’t until I was in that situation that I felt like I understood how someone could choose an abortion.”

Alford was 28 when she became pregnant. “I had had an alcohol problem, and I was nine months sober when I found out I was pregnant. The news was devastating. I felt like, ‘I just messed up my life.’ This was not my dream of what having kids would look like.”

Having recently left a job that didn’t support her sobriety, Alford noted, “Financially I was in a horrible place. I didn’t think financially I could take care of a child.” She added, “I knew I’d be [parenting] solo, and that put a lot of pressure on me.” Though Alford knew her parents would be supportive of her continuing the pregnancy, they were struggling financially at the time due to a recession and she feared being a burden to them.

Feeling out of options, she decided having a baby “wasn’t the right thing” for her, but added, “I had heard that ‘you hurt after an abortion. You never get over it.’ I thought that that pain was because women hide [the abortion decision]. So I went straight to my parents.” Alford said she was surprised when “my parents handled [the news] in a perfect way. I felt like they really listened to me.” While her parents did not contradict her stated plan, Alford learned later that after she told them of her plan to abort, “they were working behind the scenes, getting people to pray for me and setting things up to help me.”

“Send me a sign as clear as that sky”

Alford went on to schedule an abortion consultation, where she learned she was six weeks pregnant. The abortion was scheduled for a week and a half later. “It really caused me to struggle. I didn’t want to have to think about it for that long,” she told Live Action News. Amidst her conflicting emotions, she said she spoke with a counselor, a friend who gave birth to a child at age 15, and others who chose to parent in difficult situations. Yet, she recalled, “I was still feeling really like leaning towards abortion.” She went on to seek advice from her sponsor for Alcoholics Anonymous, who encouraged her to take some quiet time to rest and reflect in the silence.

Driving to her parents’ lake house the day before the scheduled abortion, in search of a place to be alone, Alford told Live Action News she looked up and noticed “the clear blue sky. And I told God that if I was supposed to keep this baby, He needed to send me a sign as clear as that sky.”

When she arrived at the lake house, Alford saw to her chagrin that someone else was already there. Alford said, “God must’ve led me to walk straight into where the guests were, and I just pulled up a chair and sat down.” A couple in their mid-50s had been invited to the lake house by Alford’s parents, hoping their story would change Alford’s heart about abortion. The couple shared their own story about how they aborted their baby shortly after they were first married several decades before. The profound regret and deep suffering they felt from that decision compelled them to share their story in hopes of sparing others the same pain.

Alford said, “They handed me an 8-week… fetal model, and they called me a mom for the first time. Before that, I didn’t want to think about being a mother.” The couple offered Alford assistance, up to and including adopting her baby if she felt unable to parent. Alford recognized a real shift in her heart after their conversation.

That same evening she attended a church event for young adults at her cousin’s invitation, and was shocked that the sermon was about the miracle of life. But the clincher came when she received a voicemail from Planned Parenthood rescheduling her appointment for two days later. “I knew for sure that I wasn’t supposed to have an abortion,” she said.

Alford was surprised to find that peace didn’t come to her until she decided at last that she was keeping her baby. “The pregnancy with my daughter Hartley was one of the most peaceful times of my life,” said Alford, even as she continued to deal with ongoing job and financial stresses.

“The single greatest thing that has happened to me”

Alford recalled that when Hartley was born, “I couldn’t believe from the moment I met her what I almost missed out on. Her life pushed me on a trajectory that I would never have been on without her.” That trajectory included a new job and eventually financial stability, beginning with Alford making headbands for her newborn daughter. “So many people started asking about the headbands that I decided to start a business — Harts and Pearls. I thought that maybe it would last for a couple months. It felt like God’s answer to my dreams of staying home with my kids, like He was saying ‘I’m taking care of you.’ That business became the way I ended up getting our first place together.”

Nine years later, that business is thriving. Through it, Alford met her now-husband Ron. When Hartley was five, Alford and Ron were married. Hartley is now in third grade and shows signs of budding entrepreneurship. She founded a dog walking business during the quarantine last summer, called “Harts and Tails,” following in her mom’s footsteps. Alford, now 11 years sober, treasures every minute with Hartley, as she has been unable to conceive any more children.

Alford encourages women facing unplanned pregnancies to reach out for help. “Find a few people that you trust to talk to. Find a sponsor — someone that you want to be like in 5-10 years. Reach out to them, open up, ask for help, ask for advice.” For her part, Alford is grateful for “the people that prayed for my baby before I even cared… Me having my daughter is the single greatest thing that has happened to me. I thought that it was going to ruin my life, and it was the exact opposite. My daughter’s life ‘wrecked’ me for good.”