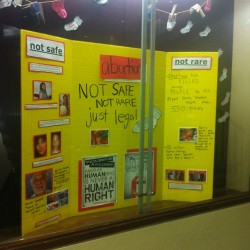 Ahhhh, the state university! A bastion of free thought, free speech, and free exchange of ideas, all culminating to present students with an education full of rich diversity and exposure to other viewpoints.

This Bama Students for Life display was removed by administration.

Such is the case at the University of Alabama, where university officials removed a pro-life poster out of concern for the well-being of students who apparently were “offended” by a properly reserved display by Bama Students for Life.

The tri-fold cardboard exhibit discussed, on one third, women who have been killed or harmed by abortion. The second fold-out addressed the realities of abortion for the unborn baby, and the middle section was dedicated to brief statements about human rights and introducing the subject matter. Some photos accompanied each section, reduced to small sizes, and as visual depictions of the information contained in the poster.

Apparently, it was too much for the student body at the University of Alabama. Despite the fact that students had previously managed to survive displays involving male nudity and a university-hosted performance of the extremely graphic “Vagina Monologues” (with advertisements promoting the production), and is yet expected to live through the university’s next stellar performance, “Blood Wedding,” also geared for a “mature audience” and with accompanying advertisements, they cannot be expected to endure any frank discussion regarding abortion. Even though the other displays regarding sexual health also don’t appear to pose a problem.

According to Donna Lake, the supervisor in charge of student displays in the Ferguson Center and the woman responsible for overseeing removal of the pro-life exhibit, the school’s policies forbid “graphic” or “offensive” content from being portrayed, so that the student center can be a “happy place for everyone.” Lake informed Donna in the recorded meeting that they had received complaints from some students who were offended, and that BSFL was “lucky they got it up there as long as they did.”

The only two problems with AU’s reasoning, however, are that first, the student policies don’t actually contain the provisions Lake claimed to be citing. Second, if the state school did prohibit speech based simply on “offensiveness,” it would be an unconstitutional restriction anyway, since the Supreme Court specifically held in the case Morse v. Frederick that educators cannot ban speech on these grounds.

The university’s actions do shed light on why it makes the list for “Ten Worst Colleges for Free Speech,” but what, if anything, they will do to rectify the situation remains to be seen. BSFL has retained the counsel of Alliance Defending Freedom and, with their attorney’s assistance, sent a letter to the university requesting an acknowledgment of the wrongdoing and a replacement of the poster in the next available display slot. The university has yet to respond.

I suppose one could at least applaud AU’s goals of making the institution a “happy place for everyone.” Everyone, of course, except the students of BSFL, the young women who will forever bear the scars of an abortion, and the unborn children of current students who won’t make it out of the “college experience” alive.