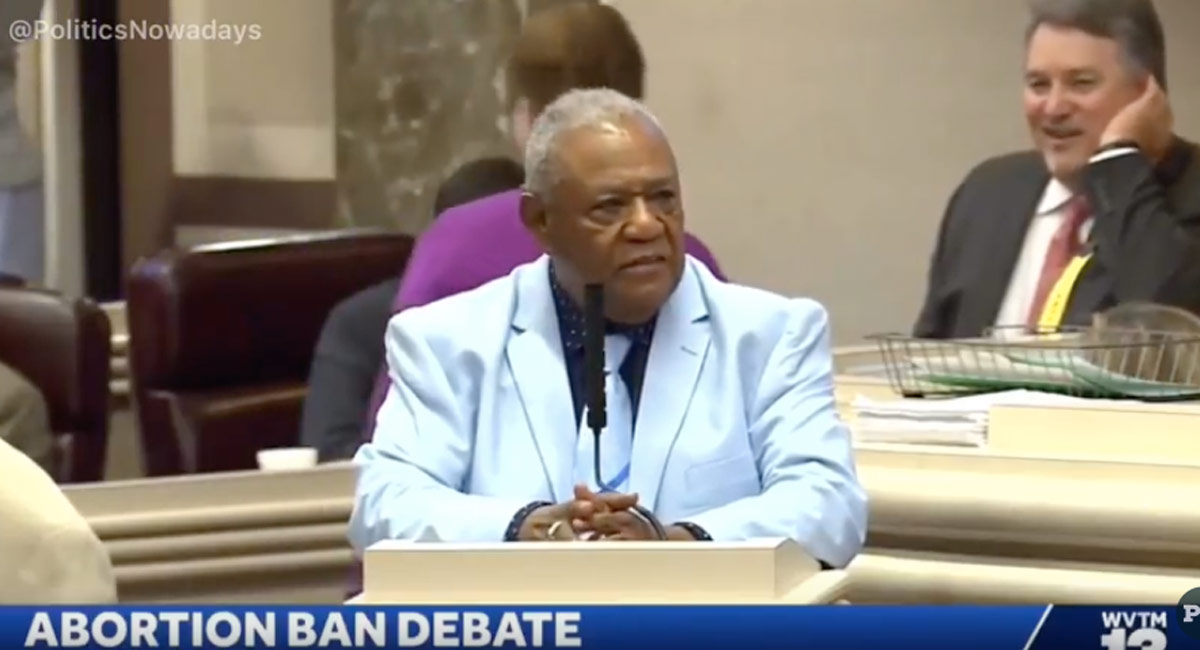 UPDATE, 5/2/19, 6:30p EST: After President Trump’s son, Donald Trump, Jr., drew attention to Rep. Rogers’ comments (see original post below), Rogers responded in the video below, saying that Trump Jr. is “proof that mothers ought to have the right to have an abortion because he is evidently retarded or crazy.”

Alabama State Rep. John Rogers (D) responds to Donald Trump Jr. calling him out for his remarks about killing “unwanted kids”, says Trump Jr. is “proof that mothers ought to have the right to have an abortion because he is evidently retarded or crazy.” pic.twitter.com/YUHTee8puw

5/2/19: This week, Alabama House legislators voted to ban nearly all abortions in the state, by a vote of 74-3. However, the skewed vote reflects the fact that pro-abortion Democrat legislators chose to walk out before the vote was taken. Alabama State Rep. John Rogers, one of the Democrats who remained, made some comments on the House floor during the bill’s debate that have shocked the public. But perhaps the reason for the shock is that Rogers merely said aloud what many abortion supporters feel (but don’t often voice in a public arena) about preborn children who born into less-than-perfect circumstances.

In another video clip, Rogers said something to the effect of, “The child is going to be retarded, half deformed….”

In support of abortion, Alabama State Rep. John Rogers (D) questions what happens when the child is born “retarded” and “half deformed” pic.twitter.com/HMV7PCVffP

According to the Alabama Political Reporter, after Rogers’ remarks about “unwanted” children, “State Rep. Rolanda Hollis, D-Birmingham, read a poem, ‘If my vagina was a gun you would protect its rights……..'” Rogers also reportedly said:

“I may bring a bill to force all men to have vasectomies. That would end this whole debate. There would be no more abortions and eventually no more voters.”

Rogers said that as a Catholic he is personally Pro-life; but that the legislature should leave options open for women.

Rep. Rogers said, “Some parents can’t handle a child with problems.  It could be retarded. It might have no arms and no legs.”

Rogers doesn’t sound “personally pro-life,” given  his references to “retarded” and “unwanted” children whom he apparently believes are better off dead. These are pro-abortion sentiments — discriminatory views about differently-abled individuals as well as those born into impoverished or unplanned situations.

President Trump’s son, Donald Trump, Jr., was one of many people to tweet about Rogers’ remarks:

This is stomach curling and makes Ralph Northam look like a moderate on abortion.

Every Democrat running for President needs to be asked where they stand on this. The extreme turn we’ve seen from Dems on abortion recently is truly sickening. https://t.co/KchZfqvQMK

“Unwanted” children may not be wanted by their biological parents, but there are millions of couples waiting to adopt children every year. To those families, those children are wanted. Those children are not better off aborted than placed with loving families. Just because a situation isn’t ideal doesn’t mean someone should be killed.