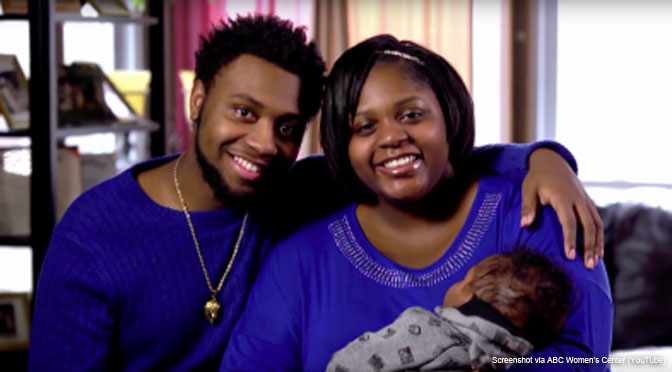 McKenzie was a scared college student, weighed down by the emotions of dealing with an unplanned pregnancy. She and her boyfriend Marcus decided they couldn’t have a baby while pursuing their education. McKenzie found a Planned Parenthood near her university in Connecticut and scheduled an abortion. When she made an appointment it was canceled. She made another appointment and it was rescheduled. She tried again and was told by Planned Parenthood staff that they were overbooked. She tried once more and was told the doctor wasn’t in. Altogether, McKenzie made nine appointments to have an abortion.

After that, McKenzie was frustrated and decided to look elsewhere for help. That’s when she discovered the ABC Women’s Center.

When McKenzie arrived at the ABC Women’s Center, she realized it was different than she thought. The ABC Women’s Center is a life-affirming, faith-based pregnancy resource center that provides abortion alternatives and assistance to those facing unplanned pregnancies. McKenzie was grateful for the kindness of the staff and the respectful way they treated her. The client advocates offered her a free ultrasound to help her in making her pregnancy decision. McKenzie accepted the invitation and came on a later date for her ultrasound. As she saw her growing child on the screen, her heart melted. ‘This is my baby,” she thought. It was in that moment that McKenzie made a decision to do whatever she could to save the life of her child.

This powerful five-minute video shares the story of McKenzie and her boyfriend Marcus. It gives insight into the emotions they both felt as college students facing an unplanned pregnancy. It also shows their great courage in deciding to choose life for their child. McKenzie and Marcus are a beautiful loving couple and wonderful parents. They told the staff at the ABC Women’s Center that without their help, they don’t know where they would be. They are sharing their story in hopes of helping others in similar circumstances.