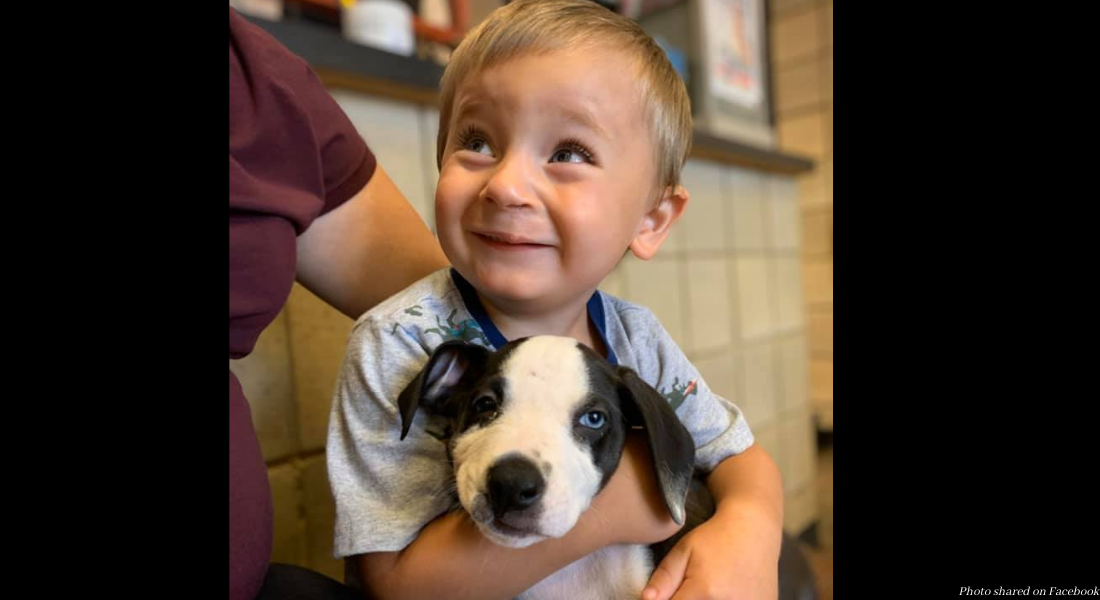 A puppy at Jackson County Animal Shelter in Michigan found the perfect home when the Boyers family found him. Brandon Boyers had stopped by the shelter to look for some chickens, but when he spotted a puppy with a cleft lip, he knew they had to adopt him. His son, Bentley, had a cleft lip, too.

“[Brandon] Facetimed me,” Bentley’s mom, Ashley, told WILX. “He goes, ‘I think this one has a cleft lip,’ and I said, ‘Get her! We need her!’” Bentley has had to undergo several surgeries, and it wasn’t always easy for him growing up. “We had to sit him up and feed him and hold his lip together in order for him to eat, so it was a process,” Ashley explained.

Though Bentley has been a happy baby since day one, according to his parents, this new puppy will help him from feeling different. “To see him have something in common with a puppy means a lot because he can grow up and understand that him and his puppy both have something that they can share in common,” Ashley said.

The shelter also said the adoption was especially meaningful for them, sharing the special news on their Facebook page. “At 2 years old and with surgeries already under his belt for his cleft lip, Bentley found his match today in this tiny pup who also has a cleft lip.They instantly loved each other,” they wrote. “We wish many years of joy as this special pair grow up together!”

Lydia Sattler, Animal Services Director of Jackson County, told WILX that the puppy, like Bentley, is thriving despite her condition. “Her disability is really not holding her back and as she grows, they’ll be able to see more if there’s anything changing that has to do with that, but she’s really doing well,” Sattler said. “She might look a little different than a normal dog would but it’s not slowing her down at all.”

Despite the fact that cleft lip is a treatable condition and has no bearing on a child’s potential, abortion is still frequently chosen when it is diagnosed. Cleft lip and palate are birth defects that are easily correctable with surgery and therapy, and numerous celebrities have had cleft lips, including Joaquin Phoenix, Tom Brokaw, and Peyton Manning.

As Bentley’s story goes viral, it will hopefully be yet another reminder that differences do not keep people from things like love and happiness.